I’m happy to report that my “spiritual, but not religious” biography of Charles Lindbergh has been accepted for publication and is now in the production pipeline. When it comes out sometime next year, it will bear a new title — a big improvement on my original, courtesy of the fine editorial staff at Eerdmans:

Thrilled that @cgehrz's terrific #ReligiousBio has received final editorial approval and is now headed into production. _Flying Solo: The Spiritual Life of Charles Lindbergh_ will be in print before you know it!

It’s been almost four years since I first started thinking along the lines that led me to Lindbergh. In fact, I published a series of three posts here in 2016, my first year at The Anxious Bench, about what I took to be “The Problems of Writing Biography” — thinly veiling my interest in Lindbergh in those months before I’d actually written a proposal or had it accepted.

I’m not sure why I thought I knew anything about writing biographies in 2016. But now that I’ve got one under my belt, I thought I’d revisit two of the problems I anticipated in light of my actual experience:

The Problem of Evidence

Most practically, I wondered if I’d find enough sources to support a spiritual biography of a decidedly nonreligious American. “All we’ve got to go on,” I acknowledged, “are whatever artifacts survive the passing of time, and most of those sources erode.”

I still don’t know how magisterial biographers like Scott Berg find enough threads to weave together hundreds and hundreds of pages covering seemingly every week in someone’s life. But for my more limited purposes, I did alright.

Even in 2016 I had some sense that Charles Lindbergh was so “highly sensitive to his legacy that he saved copies of all his correspondence and created an archival collection at a major research university early in his life,” but I wasn’t sure how much those sources would tell me about his spiritual quest. As it happens, there are also significant archival materials from Lindbergh and his family at the Library of Congress and Minnesota Historical Society, and the Yale collection was even richer than I’d imagined, full of unpublished manuscripts and letters, plus diary entries that Lindbergh excised or abridged when publishing his ostensibly complete Wartime Journals four years before his death. 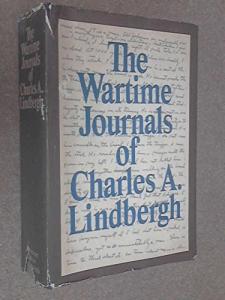 (Not that what Lindbergh did show the public in 1970 was uncontroversial, as some of the reader mail he preserved makes clear. One English professor from Oregon agreed that the onetime America First speaker “has a right to his ideas and they should be published, just to show the world what a cruel, cold and inhuman person he is—condoning the murder of six million Jews by the Nazis, among other atrocities—but not by a company like Harcourt, Brace which published the Life of Lincoln by Carl Sandburg and many other humane and civilized works.”)

Fortunately, there were other sources that let me guard against relying too much on a subject intent on doing what he could to control his image. Not only could I read the diaries of Lindbergh’s wife Anne (whose own “spiritual, but not religious” journey became a running contrast to her husband’s) and the memoirs of their daughter Reeve, but the latter Lindbergh was kind enough to answer several questions that helped flesh out my understanding of the Lindbergh home.

And as I suspected, one benefit of the media scrutiny that drove the Lindberghs to protect their privacy was that there was ample newspaper, magazine, and newsreel coverage on which to draw. That’s especially true of the chapter on his flight to Paris, when I explain that my book “necessarily becomes not just a spiritual biography of Charles Lindbergh, but a spiritual biography of the 1920s, a decade whose roaring progress could not disguise the disparities in American society, nor drown out the doubts raised by the worst war to that point in history.”

Indeed, it’s when my book uses Lindbergh’s personal story to tell a larger national or story that I felt most inadequate — not for a lack of primary sources, but unfamiliarity with some secondary sources. I was on familiar ground putting his family history in the context of Swedish immigration to Minnesota (that’s my family history as well), connecting Lindbergh’s politics to debates swirling around World War II and the Cold War, and explaining that his anti-Semitism was far from unusual in the mid-20th century. But I was never more conscious that I was a Europeanist writing about a famous American than when I had to survey U.S. religious history and provide context on Lindbergh’s racial views and embrace of eugenics.

But I guess that’s why you make sure you have a former Anxious Bench guest-blogger as your editor, so that you’re pushed to dig deeper and research, say, African American responses to Lindbergh’s most famous flight.

The Problem of Empathy and Exoneration

If I had no significant lack of evidence, I did struggle with the main problem I’d anticipated for a Lindbergh biography: how to walk the fine line historian Andy Seal discerned “between empathy and exoneration.”

On the one hand, I knew four years ago that I wouldn’t be tempted to write anything like the kind of hagiographies that passed for the first Lindbergh biographies. Unlike the first subjects I pitched to Eerdmans, I knew that Charles Lindbergh was “not obscure. Not alive. And not someone I like all that much.”

I still don’t like him much better than I did in 2016. Every fault I knew dimly four years ago only became clearer as I read and thought more about him. For example, I wasn’t surprised to find myself concluding halfway through the biography that Charles Lindbergh “simultaneously overestimated German power and understated Nazi iniquity” in the years before World War II, though I don’t think I’d realized just how deeply Lindbergh came to believe in the supremacy of Western civilization and the white race — to the point of viewing Nazi Germany as a potential ally in the fight for such causes. And precisely because he was so intent on shaping his own legacy (see, again, the editing of his journals) to deflect future criticism of those views, it seemed appropriate to be more critical at those points.

But if it became all the important not to exonerate him in some respects, other facets of the story left me empathizing with — and admiring — Lindbergh. In particular, I’ve come to appreciate Lindbergh’s commitment to education. I don’t know that I realized in 2016 that the young Lindbergh was all but written off as a poor student by parents who subjected him to a peripatetic youth and teachers who couldn’t recognize or feed his intellectual curiosity. As an adult, Charles Lindbergh became one of the great autodidacts in U.S. history, learning from reading, friendships, and travel alike — each activity ranging more widely than anyone would have expected from his upbringing.

Here he enjoyed the significant help of Anne Lindbergh, who could reasonably credit their years of marriage with “slowly changing & opening, sharpening his perceptions, his articulateness, his aesthetic & spiritual sensitivities.” But she stated all of that as part of a diary entry admitting that — contrary to widespread rumors — she didn’t write a word of The Spirit of St. Louis, the often spiritual book that won the college dropout the Pulitzer Prize.

That’s why I’ve never been happier to agree to a publisher’s suggestion for a new title. Important as his marriage and other relationships were, Charles Lindbergh ended up “flying solo” in more ways than the most famous one.

To his own daughter, Charles Lindbergh was ultimately a man of “unutterable loneliness.” I don’t know that being spiritual and religious would have eased that solitude, or challenged him to rethink some of his most troubling convictions. But I did feel confident observing that Lindbergh was never willing “to commit himself to the relationships central to most religions,” including “those connecting God to humans…” After all, this is a man who would inscribe Psalm 139:9 on his gravestone — “If I take the wings of the morning, and dwell in the uttermost parts of the sea” — but leave out verse 10 — “Even there thy hand shall lead me, and thy right hand shall hold me.”

Anyway, the book should be out sometime next year. I’ll keep readers posted at my own blog as the publication date is set, cover is chosen, endorsements come out, and a speaking schedule comes together.

September 9, 2020 An Evangelical Defense of Institutions
Recent Comments
0 | Leave a Comment
"No-one can confidently answer your last question, but one thing I know, that those who ..."
Kostya2 The Resurrection of Johnny Rotten
"A church that tacitly supports lynching because "it's inevitable" is absolutely countenancing it.You say the ..."
swbarnes2 What We Can Learn from Pastors ..."
"This is a well-reasoned article seemingly backed up by valid data. Thank you."
Maine_Skeptic Refugees and the Enduring Cruelty of ..."
"The commentary on the Bible of Kralice (from 1579; https://en.wikipedia.org/wi... says this (my own translation ..."
mcepl I Gave Them Laws Through Which ..."
Browse Our Archives
get the latest updates from
Anxious Bench
and the Patheos
Evangelical
Channel
POPULAR AT PATHEOS Evangelical
1