The Danger of a Single Mennonite Story

The Danger of a Single Mennonite Story February 10, 2021 David Swartz

As a child, my Mennonite family taught me the way of peace. They did so in part by telling the story of Hannes Muller, who in 1749 traveled from his home on the border of France and Germany to the port of Rotterdam in Holland. There he boarded a ship called the Phoenix, which carried him to the port in Philadelphia. Then traveling overland, he journeyed to Berks County, Pennsylvania, near the city of Reading and set up a farm.

About eight years later, in 1757 during the French and Indian War, “Wounded John” Miller, as Hannes Muller came to be called, met with tragedy. As he was plowing in a field, he noticed an unusual cloud of smoke rising from the Jacob Hochstetler farm nearby. Since he had recently heard tales of Indian massacres in the area, he left his plow and fled into the forest. At the same time several members of the Delaware tribe burst into the clearing from the direction of the burning homestead. Terrified, he was able to lose his pursuers among the dense trees. An alternate version is that John was chopping wood, was captured, shot through the hand as a warning, and then released. Regardless, John Miller fared better than the Hochstetler family, one of whose descendants married one of John’s descendants, whose offspring eventually resulted in me more than two centuries later.

The Hochstetler family was massacred. The sons had guns and ammunition in the home and were ready to defend the family, but the father, firmly believing in the doctrine of non-resistance did not give his consent. In vain they begged him. He told them it was not right to take someone’s life, even to save one’s own. Consequently, a son and daughter were tomahawked and scalped, and the mother was stabbed through the heart with a butcher knife and scalped. As the knife came down on her, Mother Hostetler glanced her eyes heavenward and screamed in her mother tongue, “Oh, Herr Yesus!” The father and another of his sons—who their captors decided not to kill because they were intrigued by his blue eyes—were taken captive and led into the frontier. They were released years later as part of a prisoner exchange in the French and Indian War.

The lesson of the story: Peace is difficult, but it’s the way of faith in God and obedience to the teachings and example of Jesus. My evangelical Mennonite church taught me that killing fellow believers is a violation of Christian discipleship—and that killing heathens, which might send them to eternal torment, is a violation of evangelism. Because the Hochstetlers sought peace, they should be viewed as pacifist heroes. As one account puts it: They remained “faithful in the hour of sorest trial.” As a ten-year-old boy, I was transfixed by the story, and I interrogated my own soul. Would I be courageous enough to not use violence to defend myself?

This was a true story. But there was another story that my history teachers had not told me. My ancestors may not have brandished guns and forcibly taken land from indigenous peoples. But they were nonetheless complicit in what we might call the European invasion, rather than settlement, of North America.

This second story, which is more attentive to the historical context of my ancestors, exposes their inaction in the face of terrible injustice. In this case, unlike the first story, inaction doesn’t seem quite so peaceful.

That I can tell two stories that are simultaneously so different and so true exemplifies what Chimamanda Adichie, a Nigerian-born writer, has called “The Danger of a Single Story.” When she arrived in the United States to attend college, she found that her classmates had stereotypes about her. There was the funny story of a new college roommate who wanted to hear some of her “tribal” music only to be disappointed when she pulled out a cassette of Mariah Carey. There were the less funny experiences of people assuming she had been a starving, naked child with flies hovering around her encrusted mouth. And in her TED talk, Adichie explained that stereotyping is not a singular vice of Americans, noting that she too gave in to a single story in assuming things about Mexicans and white people.

What my Mennonite church should have taught me was that the sacred texts of my tradition do offer a model of telling multiple stories. The story of Israel’s beginning is told through multiple memories. Later on King David is narrated as a violent general, a philanderer, a murderer, and a “man after God’s heart.” The New Testament opens with many gospel accounts, presenting four quite different accounts of the life, death, and resurrection of Jesus. The stories we hear depend much on the personalities, backgrounds, and vocations of Matthew, Mark, Luke, and John.

All of these stories demonstrate the awful and beautiful complexity of the human condition. We see it in David. We see it in my Hochstetler ancestors who were generous and peaceful even as they were structurally complicit in theft and violence. If we interrogate our own souls and contexts, we’ll see it in ourselves. Even when we don’t personally commit violence, we can live lives that aren’t peaceful. In short, nonviolence is not peacemaking.

It’s a sobering reality that should give us pause about overly valorizing our own heritage. There is danger in telling a single Mennonite—or Wesleyan or Catholic or Reformed or Buddhist—story. 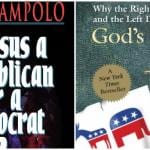 February 9, 2021
"Jesus is Not a Republican or a Democrat": A History
Next Post

February 11, 2021 LaVell Edwards: The Mormon Father of Modern Football
Recent Comments
0 | Leave a Comment
"And yet there is not 1 place or word in the Bible that condemns abortion ..."
KDNDLKJ Why Do White Christians Find It ..."
"Forced birth is not the same as pro-life. The unborn are easy to love, easy ..."
JamieHaman Why Do White Christians Find It ..."
"Perhaps a more generous interpretation of the actions of this pastor could be that he ..."
AHH The Cost of Staying Silent
"Wasnt Pauls point in Romans 14 about eating meet or not that both sides should ..."
Roger McKinney The Cost of Staying Silent
Browse Our Archives
get the latest from
Anxious Bench
Sign up for our newsletter
POPULAR AT PATHEOS Evangelical
1