RedState, I Don’t Think the Phrase “Good Deed” Means What You Think It Means

After I called out Erick Erickson of RedState for allowing a fake cleavage-showing photo of my mom sitting on the lap of Santa Claus and for calling a sitting Supreme Court Justice a “goat f-cker,” RedState’s Leon H. Wolf responded in a rather long post called, “Bristol Palin Allows No Good Deed to Go Unpunished.”  He explained that Erick wasn’t an all-powerful being that controlled everyone at RedState, that eventually they took it down, that they’d just done a Google image search, that it had the “Getty” label on it, and so forth.

The picture of my mom sitting on Santa’s lap, with her apparently perky boobs hanging out, is CLEARLY photo shopped. Anyone can point that out from a mile away.  Yet, Erickson tweeted this: 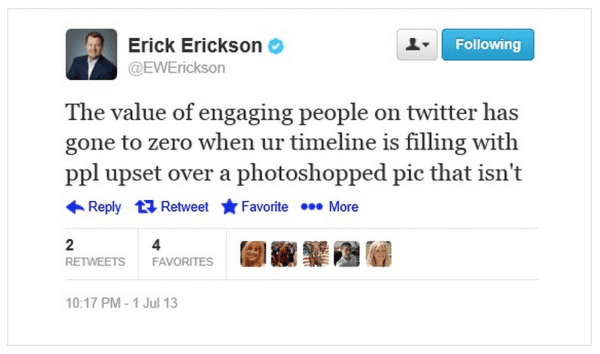 Don’t act dumb and put your hands up in the air now, Mr. Erickson. I called you out for the hypocrisy you have shown Mr. Trump, by suddenly acting like you are the standard bearer of decency toward women.

What, do you ask, is the “good deed” that Wolf is talking about? He helpfully linked to an article in which RedState denounced David Letterman making a joke about raping one of us underage Palin daughters.

Gee, that was a tough ethical call there, RedState.

To paraphrase The Princess Bride, when it comes to good deed, “You keep using that phrase,” RedState, “But I do not think it means what you think it means.”

If RedState believes a “good deed” is not agreeing with a comedian who joked about raping underage girls, then their bar is way too low.

August 12, 2015
Railroad Worker Goes Above and Beyond in Response to Hurtful Comments
Next Post