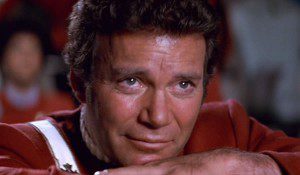 I grew up with the Star Trek series. When I was six years old and living with my family in Poland, three of my favorite and most-read books were the David C. Cook Picture Bible, C.S. Lewis’s The Chronicles of Narnia, and Stephen E. Whitfield’s The Making of Star Trek, which covered the first two seasons of the original TV show. (I wondered sometimes what Mister Spock, with his emphasis on logic, would make of Lewis’s logic-based arguments for the Resurrection, etc.)

I watched the show in re-runs and saw the first film in the theatre, with my dad, when I was nine years old. On the way home, my dad got me a Star Trek-themed Happy Meal at McDonald’s, and I believe I still have the box and the comic-strip communicator that came with it, somewhere in storage. I was in grade six when Spock died, grade nine when he came back to life, and grade twelve when Kirk & co. went back in time to save the whales. I was in my first (and only) year of Bible school when Star Trek: The Next Generation premiered in 1987 — there were lots of Star Trek fans there — and I was half-way through getting my bachelor’s degree at UBC when the cast of the original series filmed their last movie together in 1991.

It wasn’t until after the original cast had hung up their phasers that I began writing for the student newspapers, and, by the time Star Trek: Generations came out in November 1994, I had been editing the entertainment section of one of those papers for about a month or two. So the few articles I have written about the series professionally have focused on the later movies — the ones featuring Captain Picard and, now, the ones set in the alternate timeline created by J.J. Abrams.

However, I also revisited several of the films as they were released in special two-disc sets on DVD several years ago. These posts included a couple on the original-crew movies, but they also included some on the next-generation movies — and it’s interesting to see how my responses to some of these films changed over time.

Here, then, are links to all of my articles about the films, as well as some of the key blog posts in which I have revisited these films in a more informal way.

• Star Trek: The Motion Picture (1979)
No reviews, per se, though I did devote the first part of my recent series on ‘Music for Klingons’ to this film’s composer, Jerry Goldsmith. I also wrote a blog post in March 2010 on a curious parallel between the endings of this film and The Black Hole (1979), which came out in theatres only two weeks after the Star Trek movie did.

• Star Trek II: The Wrath of Khan (1982)
No reviews, per se, though I did post something in November 2002 on the film’s depiction of the parallel deaths of Khan and Spock. I also posted something in May 2009 about glass doors and the loneliness of Kirk.

• Star Trek III: The Search for Spock (1984)
No reviews, per se, though I did devote the second part of my recent series on ‘Music for Klingons’ to this film’s composer, James Horner.

• Star Trek IV: The Voyage Home (1986)
No reviews, per se, though I did discuss it in a June 2009 blog post on the way movies like this and Toy Story 2 (1999) can sometimes serve as time capsules in their depiction of the technology that was current at the time of their release.

• Star Trek VI: The Undiscovered Country (1991)
I posted some comments on the two-disc “collector’s edition” in January 2004. I also devoted the third part of my recent series on ‘Music for Klingons’ to this film’s composer, Cliff Eidelman.

• Star Trek: Generations (1994)
My original review of this film was one of the first movie reviews that I wrote for the student newspaper — and I’m afraid it reflects the typical newbie’s belief that one needs to use big words to sound impressive. I am also struck by the fact that I skewed rather positive on the film, overall, at least in relation to the last few seasons of The Next Generation — I even called it “everything the TV show should have been, plus a little extra” — whereas when I commented on the two-disc “collector’s edition” almost a decade later, in September 2004, I called the film “a wasted opportunity”.

• Star Trek: First Contact (1996)
Instead of a regular review for the student newspaper, I wrote more of a theme piece looking at the film’s use of gender stereotypes. Several years later, I posted some comments on the two-disc “collector’s edition” in May 2005.

• Star Trek: Insurrection (1998)
This was the first Star Trek movie to come out after I had left school for good, and again, instead of writing a regular review, I wrote a piece for a local magazine that looked at this movie’s approach to absolute morality. A fair chunk of the article concerns Mike Hertenstein’s book The Double Vision of Star Trek, which I also gave a straightforward review for the local Christian community newspaper. Several years later, I posted some comments on the two-disc “collector’s edition” in June 2005.

• Star Trek: Nemesis (2002)
No reviews, per se, though I did post some hasty comments after my one-and-only theatrical viewing of the film.

• Star Trek (2009)
J.J. Abrams’ first foray into this franchise was one of the last films that I reviewed for Christianity Today Movies. I also blogged the rumours about this film extensively, for the full three years it was in development and then in production, but there are too many posts to link to or summarize here. That being said, do check out this post from December 2009, on the various actors who have played Spock over the years.

And now, today, Star Trek into Darkness comes to North America. I have not seen it yet, but I hope to have something to say about it in the very near future.

May 14, 2013
Music for Klingons, part three: Eidelman + Giacchino
Next Post

May 16, 2013 Twelve-foot gods and the environment: actors talk Noah
Recent Comments
0 | Leave a Comment
"Mark 3:21, 31: "When his family heard about this, they went to take charge of ..."
Peter T Chattaway The Chosen starts shooting its second ..."
"Where do you get the idea that Jesus' mother and brothers were there to intervene ..."
tmirus The Chosen starts shooting its second ..."
"This was a refreshing read. I'm an average fan of Hellboy but I'm also a ..."
Andrew Mathews Doug Jones on Hellboy and Christianity.
"Great interview! One thing I've wondered since watching Season 1 is why they didn't include ..."
A.J. Cattapan Interview: The Chosen writer-director Dallas Jenkins ..."
Browse Our Archives
get the latest from
FilmChat
Sign up for our newsletter
POPULAR AT PATHEOS Entertainment
1