Watch: The threat of violence hangs over the early Church in the latest A.D.: The Bible Continues “special preview”

Watch: The threat of violence hangs over the early Church in the latest A.D.: The Bible Continues “special preview” February 24, 2015 Peter T. Chattaway

Another week, another video for A.D.: The Bible Continues. Like some of the previous videos, this one emphasizes the threat of violence, whether actual (as committed by the Romans and other authority figures) or metaphorical (note the title card calling the early Jesus movement a “rebellion”). Check it out below the jump.

Here is the YouTube version, which apparently cannot be played outside the U.S.:

And here is the Facebook version, which can be viewed outside the U.S.:

Two quick nit-picks, if I may:

First, a man tells Peter, “Once the Romans realize your message remains a threat, they will kill each of you.” Is that really true at this point in the story?

The Romans are not major players in the book of Acts, except, oddly, in a benign sort of way, as the figures who defend the early Christians against some of their Jewish opponents. (This is most obvious in the case of Gallio, but see also Julius, the officer who showed kindness to Paul during his journey to Rome, not to mention Cornelius, the centurion who became the first Gentile convert to Christianity.)

Some would argue that the author of Acts was sucking up to the Roman authorities by painting them in a more flattering light, but this is the same author who gave Pontius Pilate the most unflattering portrait in any of the gospels (cf. Luke 13:1 and Luke 23:6-12), so that argument only gets you so far. What’s more, Josephus concurs with Acts that the Jewish authorities of this period were prone to killing people — such as James, the brother of Jesus — by stoning them to death when the Romans weren’t around. (Compare this to Stephen’s death in Acts 7, which may have coincided with a brief power vacuum after Pilate was summoned back to Rome.)

So suffice it to say that the producers have probably trumped up Roman opposition to the rise of the early church partly because imposing gratuitous violence on Bible stories is just kind of what they do. (See The Bible for plenty of examples.)

Second, the video ends with Peter telling a lifeless woman, “Be healed,” and then she suddenly breathes. Is this from the raising of Tabitha? But wasn’t she actually dead? I’m not sure “Be healed” is quite the instruction I’d give to a dead body.

What’s more, in the Bible there is a bit of word-play here, inasmuch as Peter tells the dead girl, “Tabitha, get up,” whereas in Mark’s gospel Jesus told another dead girl, “Talitha [Aramaic for ‘little girl’], get up.” This word-play was made very explicit in A.D.: Anno Domini, but will the new A.D. make that connection…? 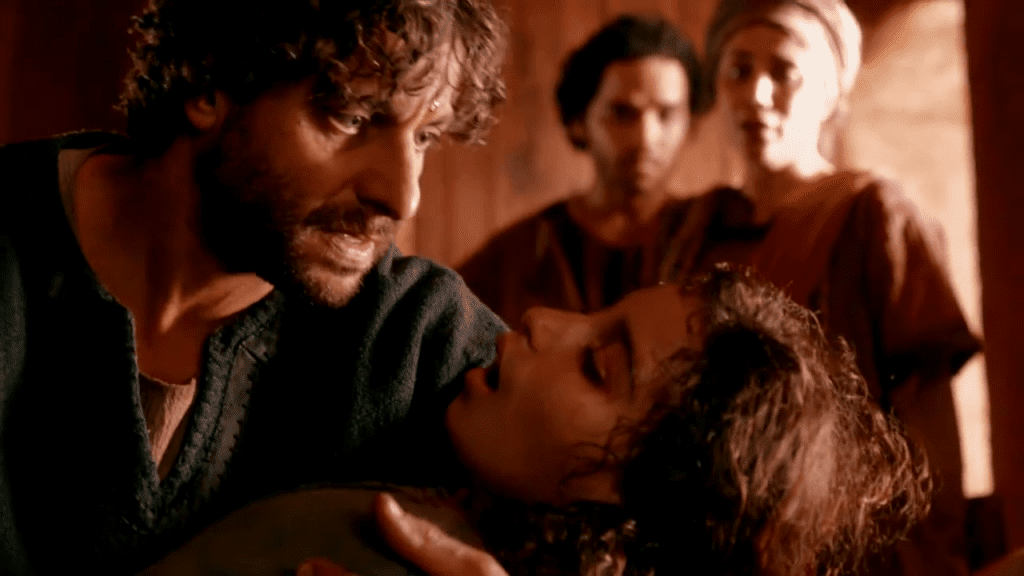 March 23 update: Whoa. I just realized that the song that accompanies this video is a cover of XTC’s famously atheistic, indeed anti-theistic, ‘Dear God’. Interesting.

February 26, 2015 Watch: The earliest known Bible movie still in existence
Recent Comments
0 | Leave a Comment
""AD" stands for "Anno Domini", a Latin expression meaning "In the Year of Our Lord".So ..."
Peter T Chattaway The Chosen — season one, episode ..."
"Why does it say at the start of episode 3 that it takes place 26 ..."
Desiree Chamberlain The Chosen — season one, episode ..."
"What about Hellboy, The Grudge, Ghoulies, and Anaconda?"
45th Spiderbob Group VGCP When R-rated franchises go PG-13 …
"Not yet, but I might do something like that once Season 2 is complete."
Peter T Chattaway The Chosen — season one scripture ..."
Browse Our Archives
get the latest from
FilmChat
Sign up for our newsletter
POPULAR AT PATHEOS Entertainment
1