Mary Magdalene, starring Rooney Mara as the title character and Joaquin Phoenix as Jesus, has been available digitally in North America for four months now, but apparently it just came out on DVD a couple weeks ago — so two new clips from the film have been made available on the distributor’s YouTube channel. Check them out below.

This is an odd clip, for reasons I explained in my scene guide for the film:

Mary washes Jesus’ feet just before the Last Supper. This is curious, and perhaps runs counter to the filmmakers’ stated intentions, for three reasons:

First, the biblical Mary Magdalene did not wash Jesus’ feet, but western Christian tradition has tended to conflate her with the unnamed “sinful woman” — often assumed to be a prostitute — who washed Jesus’ feet with perfume in Luke 7:36-50. The makers of this film have insisted that they wanted to liberate Mary Magdalene from her post-biblical association with that story, but this scene risks perpetuating that association (especially in light of Jesus’ dialogue, which resembles what the biblical Jesus said when the “sinful woman” washed his feet; see below for more on that).

Second, another Mary, the sister of Lazarus, washed Jesus’ feet with expensive perfume the day before he rode the donkey into Jerusalem (John 12:1-8). Including that foot-washing story could have given the filmmakers another opportunity to explore the role that a wide range of women — rich and poor, old and young, single and married — played within the Jesus movement. But the film ignores the sister of Lazarus, the same way it ignores the other female patrons mentioned in Luke 8:1-3, to keep its focus narrowly on Mary Magdalene, which creates the impression that Jesus had only one significant female follower — and this, in turn, arguably undermines the filmmakers’ efforts to put a more female-inclusive spin on the Jesus story.

Third, the only foot-washing that happened on the night of the Last Supper in the biblical account was performed by Jesus himself, to show the disciples how to be each other’s servants (John 13:3-17). It has often been noted that Jesus was not only acting like a slave when he did this, but possibly acting like a female slave, specifically. In the film, however, the only foot-washing we see on the night of the Last Supper is performed by a woman.

There are at least two other odd details about this clip, and the dialogue given to Jesus within it. Check out my scene guide for more information about that.

Mary Magdalene is now available on DVD and Blu-Ray in North America. 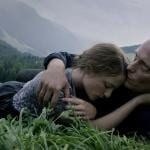 September 23, 2019 VIFF capsule reviews: Two documentaries about creativity and Infinity
Recent Comments
0 | Leave a Comment
"I have neither noticed that much. I recenty read a leadership book inspired from Cyrus ..."
Hamid Mortazavi Cyrus the Great — a Persian ..."
""AD" stands for "Anno Domini", a Latin expression meaning "In the Year of Our Lord".So ..."
Peter T Chattaway The Chosen — season one, episode ..."
"Why does it say at the start of episode 3 that it takes place 26 ..."
Desiree Chamberlain The Chosen — season one, episode ..."
"What about Hellboy, The Grudge, Ghoulies, and Anaconda?"
45th Spiderbob Group VGCP When R-rated franchises go PG-13 …
Browse Our Archives
get the latest updates from
FilmChat
and the Patheos
Entertainment
Channel
POPULAR AT PATHEOS Entertainment
1