Part 3 Chapter 6 – Before You Meet Prince Charming May 29, 2017 Suzanne Titkemeyer 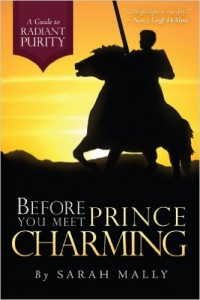 All quotes from the book ‘Before You Meet Prince Charming’ by Sarah Mally are in blue text.

In the hands of a different author, I might think the author was demonstrating the painful strain that waiting puts on humans by making the reader slog through long anecdotes that lack any internal story arc.

From this author, though, I think the issue is an absolute lack of life experience.  The stories remind me of talking to my cousins when they were toddlers.  One cousin gave me a breathless description of how the grocery store was out of peas when they went shopping and so “mama had to buy green beans!!!”.   Her twin sister detailed the horror of having a bunny appear out of nowhere in the yard when they were playing and running terrified into the house.

Funny stories from the mouths of two-year-olds.  Agonizingly dull when told by a 26-year-old author of a self-help book.

This section starts with Sarah talking with a 12-year-old after a talk delivered by Sarah and her dad.  The twelve-year-old has a boyfriend which Sarah is silently aghast at.  Sarah attempts to use leading questions to get the kid to realize that dating a non-Christian at least six years before the girl sees herself getting married is foolish.  The tween seems wonderfully immune to Sarah’s line of questioning and mentions that it’s hard to wait.  Sarah mentally devalues that statement by saying that the tween hasn’t had to wait as long as some other people – but she walks that idea back in the next sentence.

I don’t think it’s a great idea for a 12 year old to be in a serious dating relationship, but Sarah never bothers to ask what “dating” or “having a boyfriend” means to the tween.  Asking that question, however, requires understanding that “dating” is not a single monolithic concept practiced identically by all age groups.  Ms. Mally would also have to be willing to learn from a less “emo-pure” person – an idea that is clearly beyond her worldview as demonstrated by this book…repeatedly.

The next page can be simplified to “God wants us to wait because God’s Plan for us requires waiting.”  Ms. Mally misses the circular nature of the argument.  She also lists a few Biblical characters who are required to wait without discussing the nature of their waiting.

After that warm-up, Sarah launches into an example of waiting in her life.

“How much longer, dad?” I complained.
I was about 13 years old, and Dad and I were late for a birthday party. I’ve been looking forward to it all day, but now that it was time to go, Dad wasn’t ready. At first I tried to wait patiently, but after waiting about a half an hour, I was getting upset. After all, several families with girls my age we’re going to be at this party, and I was hoping to have as much time as possible to be with my friends! (pgs. 111-112)

“Dad, please hurry!” I whined. ” We’re already half an hour late, and I wanted to be early!”

Dad was still working on getting his present together, and he didn’t seem to care that we were late. He didn’t even seem to be hurrying. I was feeling annoyed.

After several more minutes of complaining on my part, Dad was finally ready to go. I jumped into the car, hoping Dad would drive fast! Approximately 5 minutes into the trip, Dad suddenly asked, “Did you bring the gift?”

“No, I thought you brought it.”

“Well, I better turn around.”

“But Dad, we are already really late!”

Needless to say Dad turned around and we hurried home to pick up the forgotten gift.(pg. 112)

When we finally arrived at the party, Dad and I went to the door and found out that we were early! We had been mistaken about the time! In fact we almost spoiled the surprise party by arriving too soon. it sure was a good thing that we were late! (pg. 112)

Next in the parade of mindless anecdotes is the epic story of waiting for God to provide ministry space of the assorted Mally family ministries.  Honestly, I can’t entirely make sense of the story so I might have some details mangled.  The Mally Family has multiple ministries that they were running out of the home for 5 years.  The ministries have accumulated so much stuff that Sarah’s bedroom and her parents’ bedroom have been transformed into offices while their former occupants have moved into the basement with more ministry crap.  The family has a few opportunities for expansion without any debt fall through. (*cough* Gothardite cult member *cough*) The search for options must have been complicated by the fact that the family hasn’t decided what exactly they are looking for.  Finally, the Mally Family received a second house directly behind their current house through some series of events that are not explained at all – but it was clearly divinely inspired.

Apparently, God wants people to wait  – and don’t you dare shorten that wait time by planning!  To me, the family needed a climate controlled storage space to put all of their ministry “materials” like the books published by the Mally Family along with the guided study workbooks for the books.

I can’t believe this chapter is going to take four posts, but there are five sections left with two quotes that boggled my mind so I’m going to stop here so the post isn’t too long.

May 29, 2017
Quoting Quiverfull: Beat That Child to Make Him Stop Crying?
Next Post

May 30, 2017 Quoting Quiverfull: Disobedient Children Are Like Dirty Rats?
Recent Comments
9 Comments | Leave a Comment
Browse Our Archives
get the latest from
Nonreligious
Sign up for our newsletter
POPULAR AT PATHEOS Nonreligious
1