Doug also throws around the word “casuistry” a great deal here. I had to stop and look it up because it was unfamiliar. This is what it means. From Websters online.

Okay, now we have Doug’s fancy word he looked up in his thesaurus/dictionary out of the way let’s look at his argument, an argument that tells me he never considered the possibility of anything different than man on top in the dark missionary position sex among Christians. Guessing he missed “Lars and the Real Girl” 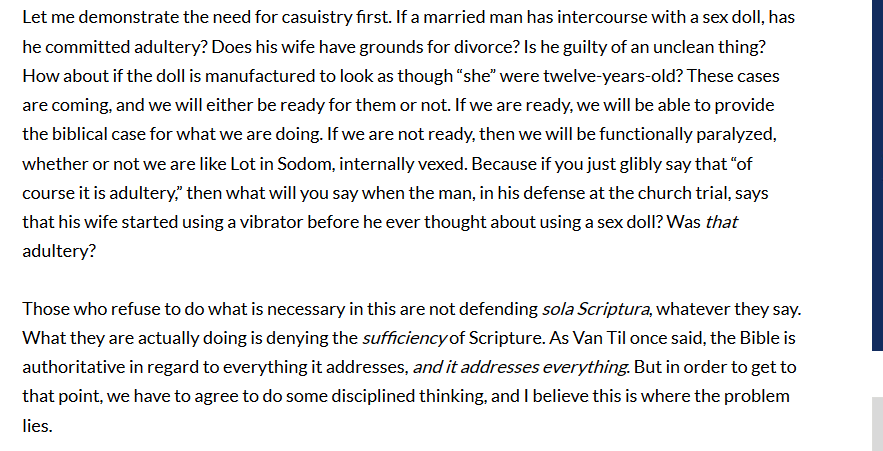 Doug does not realize this is an old issue and no one has sued anyone else for mechanical infidelity. Yawn, move along here, nothing new to see.

Sexual tsunami? He’s on a roll. Again, these are things that have been going on for years now.

Interesting that he’s saying that even talking about such things is prohibited because of the nature of vicarious thrill and titillation when that’s exactly what he is doing here. Again, a couple’s sex life is their business alone.

In the rest of the piece Doug manages to denounce and sneer at a long laundry list of celebrities and others that do not conform to his self-defined version of righteousness, poking his nose into all sorts of issues of sexuality, from gender identification to sexual proclivities. He goes so far as to say that these are people and things seeking to tear down decent Christian society. His list?

I leave you with this quote of his from the middle of that list:

“You can get sex the same way that people buying a double-wide trailer in the 70’s could get wood paneling.”

Exclusionary and judging based on class of housing. I’m so sure that Jesus would not like that much.

Skipping many paragraphs of his defining what true womanhood and manhood looks like because we all know what that looks like in Evangelical Quiverfull. Women stay home having babies and treating their husbands like God, while men behave in ways that reminds one of petty, tin-plated dictators.

Doug needs to stay out of everyone else’s bedroom. Owning your own sexuality, no matter what that looks like, is not his business at all.