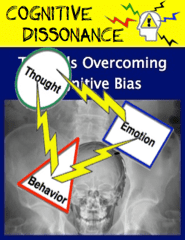 If we seek to gain more self-control when we experience cognitive dissonance, we need to understand how we respond to it.

Research in psychology and neuroscience continues to validate the original findings of the first study in the 1950s that birthed the now familiar term. Subjects were asked to perform monotonous, utterly pointless tasks while researchers pretended to observe them closely while furiously taking notes. At the end of the performance portion, the researcher asked each subject to tell the next participant that the study was engaging and fun. (They were asked to lie which would rattle their sense of consistency.) They then answered a battery of questions about their impressions of the study. The subjects were divided into two groups: one that paid subjects very well (a contemporary equivalent of $150), and one that paid only a minimal sum (the equivalent of $8). 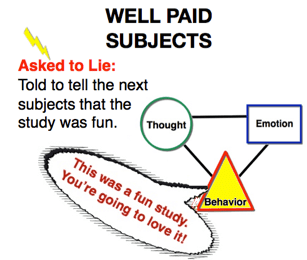 The group that was paid well, but during the evaluation phase, the subjects in this group admitted how incredibly boring and useless it seemed. This group did not feel a great deal of stress, explaining that they perceived it as performing the job that they were hired and paid well to complete. 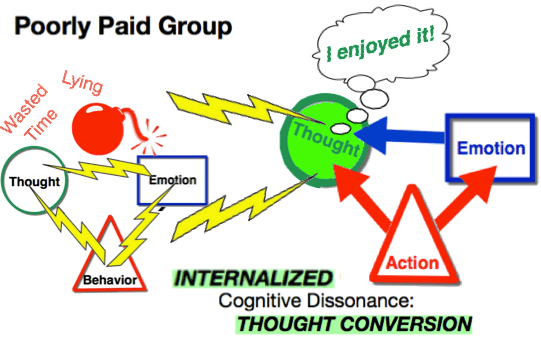 The poorly paid group experienced far more cognitive dissonance than their well-paid counterparts. They chose to comply with the requests made of them, but they expressed that they enjoyed the monotonous of the study. In the absence of the external comfort of generous compensation for their time, the poorly paid subjects experienced more stress. They felt more responsible for the lie that they were asked to tell. 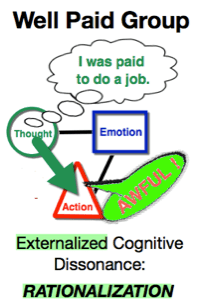 To save their ego for agreeing to participate in an utterly worthless investment of their time, they adjusted their thoughts. The idea that the study served no purpose bothered them, and their ego rose to save the day. They absorbed the disquieting feeling of dissonance, and they changed their narrative about it, redefining it as pleasant and enjoyable. They internalized their cognitive dissonance, assigning an attitude of pleasure to the experience through their own internal means.

Can it happen to me?

Consider how all of this might work in a church service with a pastor who likes to ask the congregation to ‘answer back.’ If you’re not familiar with this kind of church experience, you can likely find a televangelist who asks the crowd, “Can I hear an ‘amen’?” This is a request for behavioral compliance to which most people will yield. Sometimes, I think that it may be a tactic to keep people conscious during long discourses, but some ministers also ask people to raise their hands (“How many of you here tonight make payments on a car loan?”), or they ask the congregants to “repeat after me” as they recite a prayer, line by line.

Keep in mind that we humans like others to think of us in the same way that we think of ourselves, so we play along by conforming in the moment, not realizing that these small requests for compliance increase the likelihood that we will comply with future requests that will not be as trivial. You might choose to do what I do and refuse to comply with all such requests just because I understand this as a process of undue influence. What situations do you recall when you felt this kind of pressure to conform with seemingly harmless requests?

She blogs at Under Much Grace, Enmeshed for Jesus, and Redeeming Dinah.