Through the years I sometimes cover Evangelical writer Sheila Gregoire. Rarely because much of the time she’s perfectly nice, not fulminating poisonous tripe, like say Lori Alexander of The Transformed Wife does. Her blog To Love, Honor and Vacuum is more concerned with things like Christian women knowing they are supposed to be having orgasms too. I see that blog title, laugh and think, “Girl, get a Roomba and be done with the vacuuming!”

Today Sheila is taking on a rather vile assertion by the guys at Focus on the Family. They’ve released a book titled “How God Used the Other Woman: Saving Your Marriage After Infidelity” by Tina Konkin

This is one of those posts Sheila does where I am shouting from the sidelines “Right on!”. I totally agree with her. I don’t always agree with Sheila about everything, but I appreciate that she does not fall apart, run away crying, or get hyper defensive like Lori Alexander does. We can agree to disagree.

The gist of this awful book is that wives who are cheated upon bear responsibility for the actions of their husbands.

Sheila starts where I would, you cannot own your own problems and rebuild your marriage until the cheating spouse owns their cheating and repents from it. Sometimes that never happens.

Focus on the Family tweeted this about the book: 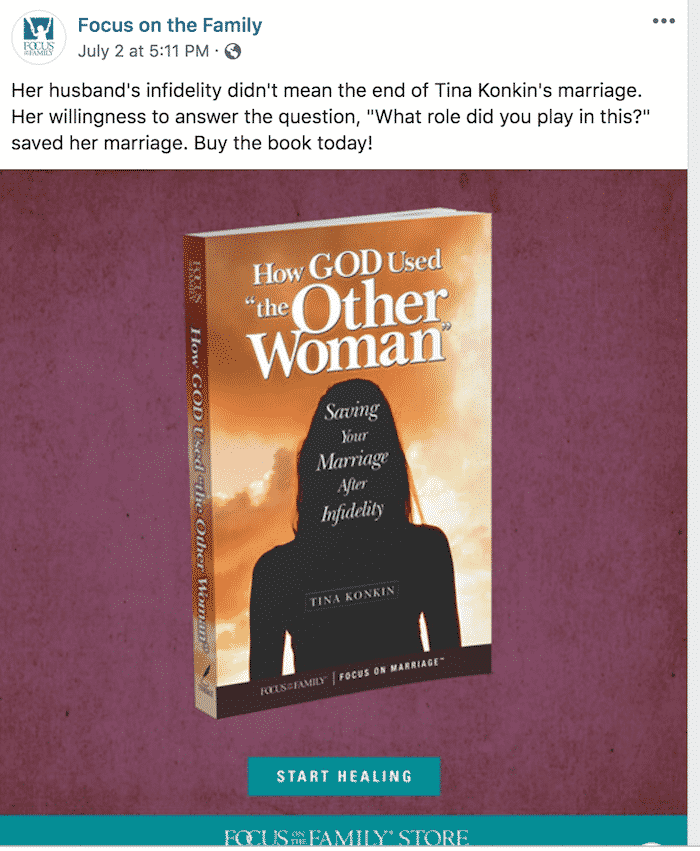 The first step must be repentance. No ifs, ands, or buts. If Focus on the Family had said something like:

“He had an affair and repented. She found the strength to forgive–and the humility to rebuild the marriage.”

I’d be fine with that. But the way that Focus worded that status, the thing that mattered was not his repentance but her acknowledging her role. That’s toxic thinking.

Do you expect anything non-toxic from Focus on the Family, a group whose leader bragged about his mastery over a small dachshund he furiously beat into compliance? Emotionally healthy people do not think animal abuse is such a great thing, much less an analogy for how to treat your strong willed child.

Is she to blame?

Sheila writes up a long laundry list of why it is not the wife’s fault if the husband cheats that I encourage you to go read, but this really boils down to one thing and one thing alone. This.

The cheater made the decision to cheat. No one else did.

No matter how good or bad the marriage is the person that cheated crossed that line into infidelity all on their own. They didn’t consult the cheated. They decided their own sexual gratification was worth more than their children and spouse, the hurt it would cause, and the ongoing damage. They willingly violated with promises made on their wedding day. It is one of the deepest betrayals someone can do.

I’m not talking about those marriages where there is an agreement in place that fidelity is not required, or people estranged and separated. I’m speaking of those where it’s likely the put upon partner has no real clue this has happened until it’s  too late to salvage much of the marriage. The cheating, lying, emotionally abusive people that string the unsuspecting spouse along.

Blaming the unsuspecting faithful long suffering wife to a husband that cheats is such a slippery slope into blaming women for all sorts of things that they have nothing to do with. Example: At my old church I was blamed for my husband deciding on his own to leave the church, even as I was staying. Not that leaving a church and infidelity to anything to do with one another. These are the same kinds of weak Christian men that refuse to take any responsibility for their own actions. The kind of men that likely blame Jackie Kennedy Onassis for not picking up pieces of her husband’s skull and wiping down the blood from his assassination, something so inappropriate in any moment that she is in no way responsible for.

A comment from Sheila’s site that explains this horrid tendency in Evangelical Quiverfull to pin the blame for every horrible thing on women:

But a choice to cheat is on the cheater.

And the problem is that there is a HUGE problem of women being blamed for things without there being proper blame on the husband.

A woman is cheated on – well what did she do? Did she sleep with him enough? Disrespect him?

A woman is raped – well what was she wearing? Did she go out somewhere alone? Why didn’t she scream louder?

A woman is abused – well did she make him angry? Did she start the argument? Was she struggling to submit?

It’s not on the women. It’s on the cheater.

July 27, 2019 Teens Rebel Because Momma Rebels Against Husband?
Recent Comments
36 Comments | Leave a Comment
"Honestly, Doug here has no idea how little I care about his opinion. My husband ..."
Whitney Currie Don’t Find Yourself?
"At a guess? Birth control."
Whitney Currie Don’t Find Yourself?
"It looks really awful. I think cutting it off is the only realistic thing to ..."
Zeldacat When Quiverfull Beliefs Run Public Policy: ..."
"That's awesome! A wandering sinner lol. I like it!"
Cathy Young Michael Pearl Literally Judges Everyone Else’s ..."
Browse Our Archives
Follow Us!