Evil Women Demanding Not to be Harassed?

As bumptious as Lori Alexander has been this week mixed with horrified surprise of finding a man masquerading as Christian while exhibiting perverted behaviors I have not taken a look at one Larry Solomon of Biblical Gender Roles this week. He’s been one very busy beaver this week. He must not have much going on in his work world.

Larry the hairy man supports Lori Alexanders words on believing Paul over Jesus, he willfully misunderstands what communism and socialism is. He does not even understand that what Jesus preached was a kind of socialism, and ranted about humanism by saying God has ordained and raised Donald Trump to near sainthood.

I don’t know what type of dirty sheets and old spices Larry Hairy Man Solomon is smoking over there, but he is scaring me. The Trump thing is almost the most frightening, although saying that Paul is equal to Jesus/God is pretty far up there. But still not the worse. Oh no! Larry posts the whining of a regular reader that has been drummed from the military for sexual harassment allegations. So Larry takes after the women of the Me Too movement.

Glassadonis is upset that he is being released, but he’s not being given a Dishonorable Discharge, which is much more serious. The way they are releasing him via a General Administrative Separation isn’t nearly as bad, even if he’s losing his benefits. Usually you see a GAS when someone continually fails to make weight, cannot keep up during mandatory physical fitness activities, lazy, mouthy, drunk, or caught with drugs. It happens because of bad personal behavior. Sometimes it happens because your Commanding Officer is just sick of having to constantly deal with your less than stellar shenanigans.

But here’s the thing neither Larry or GlassAdonis (that name is killing me here!) do not get. It’s not for a one time offense. It’s almost never used that way. Usually it is a pattern of bad behavior, documented and the soldier counseled over it time and again.

The presence of women in the military only makes it sort of a brave new world, that no one really has handled perfectly yet. For many years it’s been a boys club, with women relegated to chores like secretaries, medics and non-combat roles. There will be some ups and downs before this completely shakes out.

I remember years ago, like 27 or 28 years ago when my husband was an NCO in the Army. He came to me several times wanting to know how to handle certain situations with female soldiers, one in particular that lost days every month to painful periods. He didn’t want to write her up or counsel her if it was legitimate. We talked of various ways he could handle the situation to deescalate it.

If GlassAdonis is being separated out for sexual harassment it’s likely a pattern going on for one long time. He’s likely been counseled over it, told to cool it, yet decided he was going to do what he wanted. He likely fully brought this on himself. If there is one thing the military has had in spades for many years is macho jerks that think they know it all and that women are to be used.

Larry’s ‘advice’ that isn’t throwing a nonsensical pile of scripture at it? This: 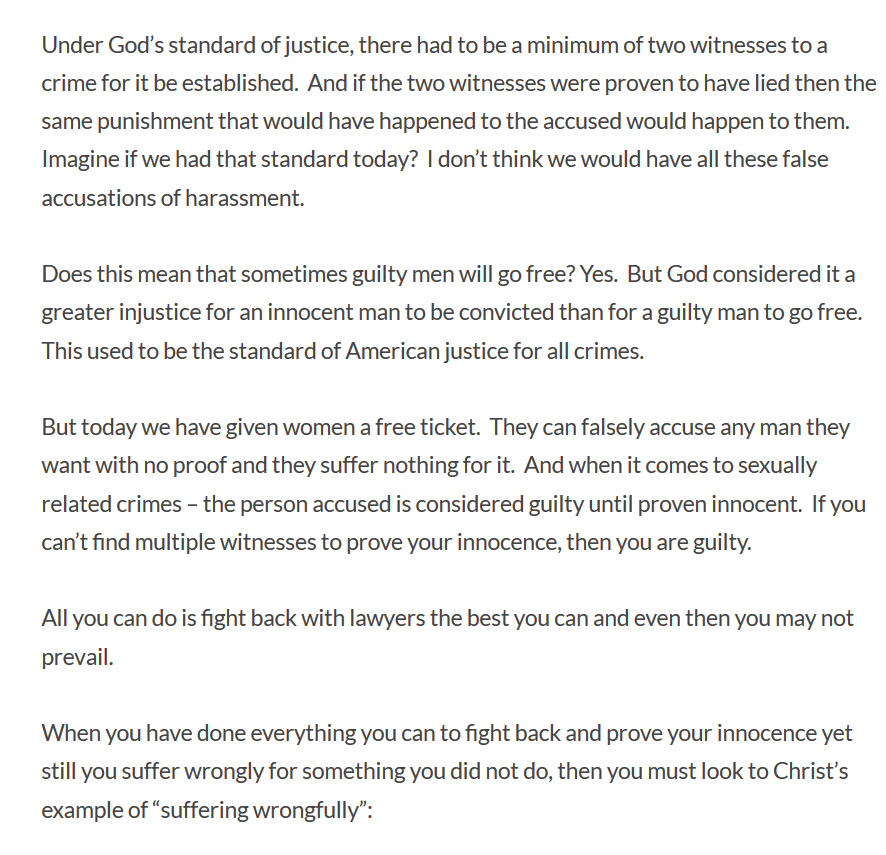 I am puzzled why GlassAdonis thinks Larry would have any answers in this situation as Larry has likely never served in the military. This is like a concert saxophonist asking a barnyard chicken to teach him another instrument. Larry is right that this guy needs lawyers.

One thing we’ve not covered here that I will have to research is Quiverfull in the military. They do exist, in greater numbers than you might imagine because of the benefits. I have seen families that fit that mold during my husband’s years in military intelligence.