Larry Solomon: Let’s Return All Women to Barefoot and Pregnant

Larry Solomon of Biblical Gender Roles has had  a busy week. But most of his bad advice is confined to telling young Christian women to find a good Christian man online, defy friends and family by marrying him and pushing out a passel of children. No matter what anyone else says. But this morning my eyes fell on this piece by Larry bemoaning women becoming educated, having careers, and most disturbingly, being able to use birth control and abortion. Larry is against women having any reproductive rights. It’s all marry and breed with no voice, no rights, just simpering submission. Larry Solomon: Let’s return all women to barefoot and pregnant.

I’m not going to quote from his copious verbal vomitous about abortion, scripture twister, and hatred for any spark of independence for women. I’m merely sharing the conclusion. Trust me, your stomach will thank me later if you decide to go in and read his lengthy mewlings. 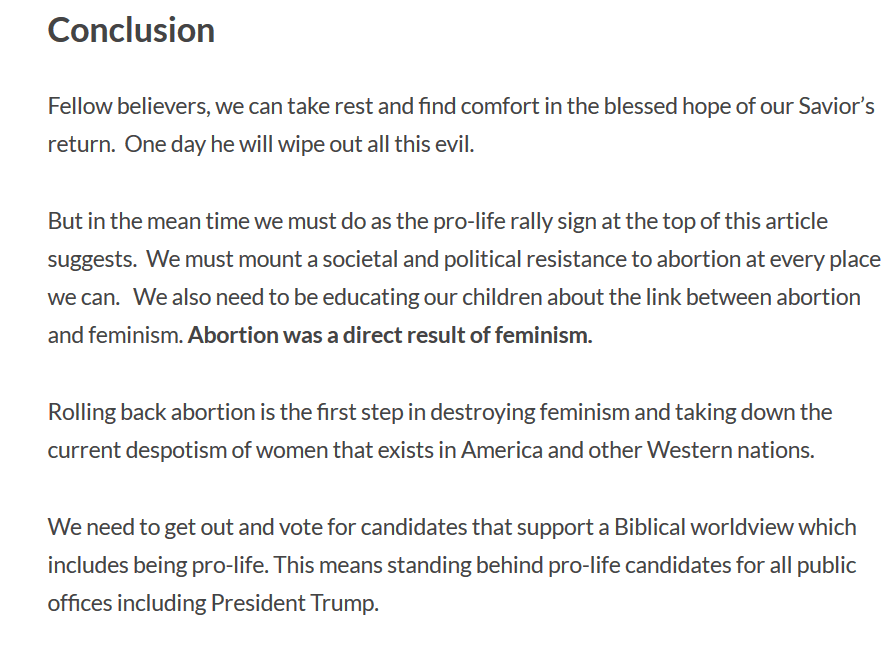 I have to answer these very wrongheaded conclusions of Larry. I cannot let these falsehoods and wishful thinking stand!

Are we even talking about the same Jesus here? The one that hung out with prostitutes, tax collectors and other bad actors? Jesus wasn’t about punishing folks during his time on earth, or even being anywhere near the religious people of his time, so I’m thinking Larry’s sick punishment fantasies are just that – fantasies.

Feminism did not cause abortion. One statistic I’ve seen when I was volunteering at a crisis pregnancy center suggested that the rate of legal abortions at that time (mid 2000s) was much lower than the rate of illegal abortions during the 1930s. Abortion, in one form or another, has been around well before feminism. It will likely continue, driven underground, if Larry and pals manage to get it banned.

Which isn’t very likely. When we saw who Larry really was we also got to see how impotent and powerless real Larry is. Larry is the equivalent of the troll under the bridge shouting at passerbyers, but much less scary.

Again, if he does manage to help roll back abortion, like he’s claiming, it will just go underground, more women will die and rates of abortion with skyrocket again. Particularly if birth control is also banned.

Larry supporting Trump is actually almost comical! Trump, now here’s a guy that has tried to force wives and mistresses to have abortions. Some great role model, particularly in the wake of his reprehensible actions towards the Turkish Kurds and his admitted falsehoods about his Ukraine phone calls asking for dirt on rivals.  It blows my mind that our president wants to levy sanctions against a place where we have strategic military bases.

Here’s the other thing Larry does not ‘get’ There are plenty of us ‘evil feminists’ (real responsible people) voting on the other side. There are more of us than his group, and it stands to reason that his slate of approved candidates just might be swept out of power on the next election.

But what do I know? In Larry’s world I’m just another dumb woman who’s brains are only big enough to contain bread recipes and scriptures.

October 10, 2019
Should You Feel Romantic Love in Marriage?
Next Post

October 12, 2019 Hipsters Are Gay Wimps?
Recent Comments
53 Comments | Leave a Comment
"This is late, partly bc of my preoccupation and partly bc I'd been slowly reading ..."
Jennifer Serena’s Serenity – Luxury Hotel, Birthing ..."
"Thank you for your commitment to truth and love, Suzanne. Best wishes to you and ..."
Meredith Anne Not a Goodbye, More of a ..."
"For what it's worth, I've learned a lot from you about a Very Creepy movement ..."
Gwen Pryce Not a Goodbye, More of a ..."
"Unfortunately, this kind of satire (if it even is satire) is what gives Christianity the ..."
Emily Is Biblical Gender Roles a Big ..."
Browse Our Archives
get the latest from
Nonreligious
Sign up for our newsletter
POPULAR AT PATHEOS Nonreligious
1