Doug Wilson of Blog and Mablog likes to do something called ‘No Quarter November’ where he takes on what he thinks are controversial subjects.  Don’t think he realizes they come across more like ‘No Brain November’ because they sound more like your Paw-Paw might rant from his rocking chair in a nearby senior home. They aren’t rational, or even supported by any factual evidence. Fact free.

Doug does not mention this film, but his ranting reminds one of the idiocy spouted by the masses in the film. Particularly after you look at his assertions and the fact there is only his word that they are wrong. He is a pseudo intellectual who thinks he is a genuine intellect.

Commies? Someone needs to tell Doug that the Cold War and real hard core communism has been mostly dead since the 1990s. Or perhaps this is just his knee jerk reaction to those on the left calling for the impeachment of president Donald Trump for collusion with a foreign power and asking for a quid pro quo on possibly illegal and very morally squishy things. Put down the tv clicker Gramps and go take a walk outside.

I swear, I have days when I think Fox News should be brought up on charges of treason just for the lies they spoon feed to older Americans.

Poverty and Wealth levels are manipulated by evil liberals according to Doug.

First Doug tries to say that the numbers released by the Bureau of Labor Statistics on poverty and wealth are very wrong. I’m not entirely sure I follow his convoluted reasoning, but I do understand how BLS compiles their numbers, calculates percentages and is quite accurate, unlike Doug.

Here is how those numbers come about, and there’s no double-dealing, or chicanery like Doug alleges. No, it does not take into account various people moving up and down the sliding scale of wealth. The Bureau of Labor  (full disclosure, my husband’s employer for over 20 years) in the Department of Labor has a division, Office of Field Operations,  that all they do is go out and price the costs of everything, food, utilities, housing, clothing, you name it throughout the U.S., even Alaska and Hawaii.

This data is complied to come up with what it would cost both per person and for a family of four or more persons to live in a region. Anything below that absolute rock bottom figure is the poverty index. The national index is all the regions factored together.

That data is fiercely protected before release and held and complied in a secure area by those with security clearances before being released to the general public and other governmental agencies to use in their planning.

Doug’s type of thinking is common in Quverfull and Evangelicalism where you have people whose only sources of information are Fox News and right wing fundamentalist conspiracy theorists. Lack of access to information can be deadly. 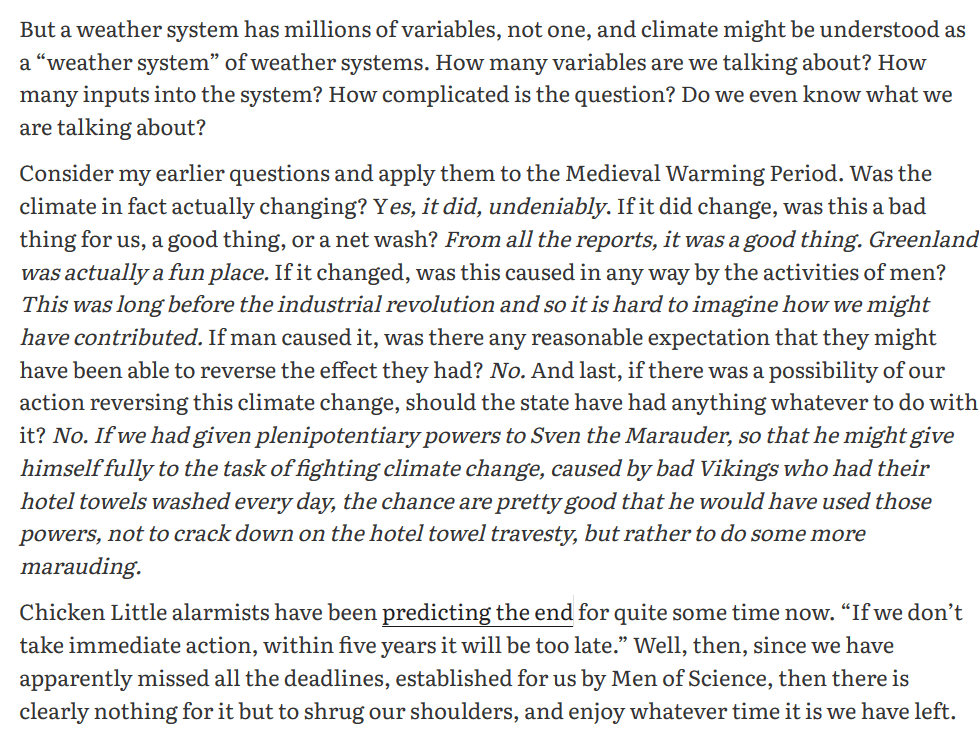 Oh Doug! Here’s what Doug is missing. Weather data has been collected for literally centuries. Yes, there are variables. A large scale volcanic eruption can change the weather in a particular region for a long time. Yes, it’s unpredictable in some ways, but weather patterns are documented, exist, have existed for a long, long time and inferences can be drawn from data like measuring polar ice, and even just general observable weather patterns.

Example: I know that when ‘The Doldrums’ or Tradewinds Convergence Zone, arrives by the fall of barometric pressure that we’re going to likely get afternoon showers. Just like others know when snow is likely, and other common weather.

Why and how? Because many centuries of evidence and long experience by others tells me so. That’s all that is happening with climate change, years of data carefully compiled tells us that everything is warming up, and ramping up to an extinction level event. Doug cannot see what’s before him. 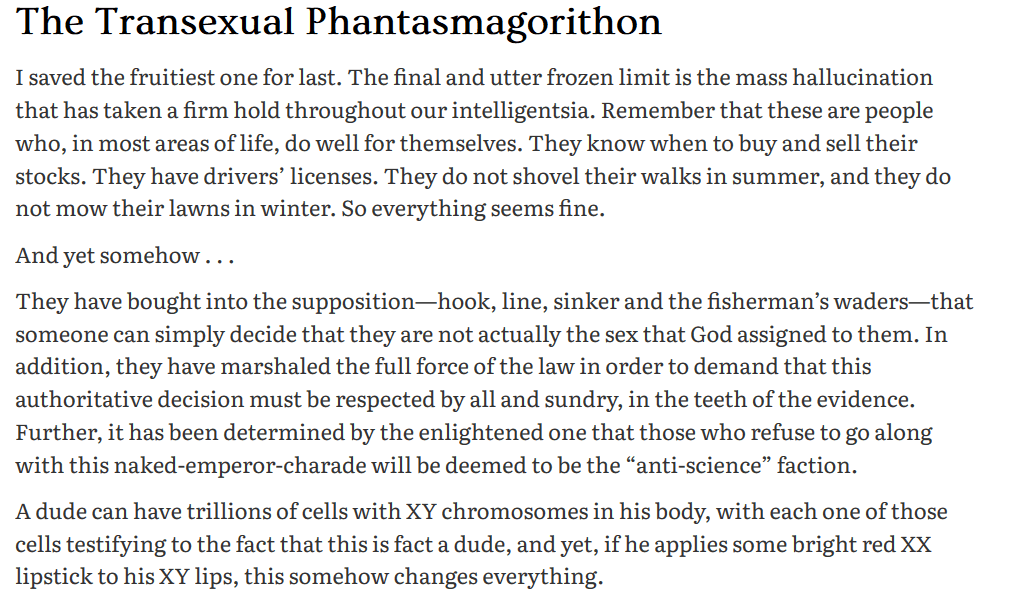 Sexuality does not work like that. We don’t just suddenly decide we’re straight, we’re gay, we’re transgendered. You just are. It’s a hardwired thing. Unlike hideous homophobia like Doug’s that is a decisive divisive decision he personally made.

Doug Wilson, wrong on data collection and collation, wrong on weather, and wrong on sexuality. A typical Fox News viewer in the wilds of Idaho, far from any real influence or power.

Did you know that Doug is now pushing his potato salad slinging romance novel on podcasts? It’s kind of hysterical how serious he is about his romance novel.

November 24, 2019
The Benefits of Being a Housewife
Next Post

November 26, 2019 'Fixing' Depression Requires More Than Prayer
Recent Comments
52 Comments | Leave a Comment
"This is late, partly bc of my preoccupation and partly bc I'd been slowly reading ..."
Jennifer Serena’s Serenity – Luxury Hotel, Birthing ..."
"Thank you for your commitment to truth and love, Suzanne. Best wishes to you and ..."
Meredith Anne Not a Goodbye, More of a ..."
"For your sake, I am so glad you will no longer be editing and managing ..."
Lana Not a Goodbye, More of a ..."
"For what it's worth, I've learned a lot from you about a Very Creepy movement ..."
Griff Pryce Not a Goodbye, More of a ..."
Browse Our Archives
get the latest from
Nonreligious
Sign up for our newsletter
POPULAR AT PATHEOS Nonreligious
1