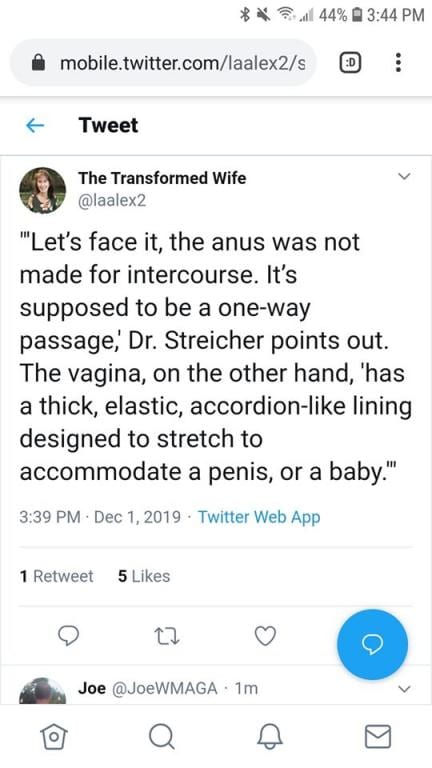 I’m confused. Isn’t this the same woman that recently told women to be modest, discrete and not to discuss these sorts of things in public? Said this is just not something good Christian women needed to discuss in public. Well, at least after she posted repeatedly about ten minutes and lube and hinted that she weighs her excrement to determine her health.

Just not getting the why here. Or why Lori decided she must couch a personal sexual choice that is no one else’s business in the language of health care. A false claim made as if it is an established medical fact.

But it leads me to a discussion on health in general and woo health advice as it relates to Quiverfull. During my years in QF I had heard more contradictory health advice, seen some of it take out friends of mine (Hello orange from living on carrots man who died from cancer and gray woman living on silver!) to the point where discussion of chemotherapy and radiation options with a friend was shouted down as ‘demonic’ She died slowly, painfully, without any medical attention before her husband got a new Corvette and a twenty years younger bride.

Lori, and others like Debi Pearl, refuse to consider any real legitimate medicine or treatment going for the “woo” every time. How does that happen? Luckily I had a front seat to see how a recent ‘woo’ trend happened.

Out of frustration over being constantly bombarded by bogus treatment information and medicines being pushed by a pile of people I joined a Facebook group named “Hold Space For My Tribe” It’s a comedy-parody site that pokes at everything woo and strangely cult like. Almost every single time I share something from there page people are confused on if it’s real, that’s how close it cuts sometimes.

Parody is sometimes a powerful way to oppose the wrongs of our society.

Shortly after I joined they posted a meme, just one of many, depicting a man displaying his anus to the sun with lots of babbling about recharging that way. I laughed, and moved on to look at something else. They shared it a handful of times until about a year ago.

Here’s the meme sanitized for publication at Patheos.

About six months ago it started popping up as legitimate health advice in some of the more radical out there yoga groups. I laughed and wondered who could possibly be gullible enough to do this.

Then yesterday happened, and on Facebook there was a news article about the actor Josh Brolin claiming he had sunburned his perineum doing this very thing! From joke meme making fun of woo to embrace by alternate healthers and injury to their followers in just under  a year.

It’s a good lesson on how things can be taken completely out of context on the internet, and find their harmful way into the lexicon of health. Beware health advice from non-scientific sources please!

Which leads us to Debi Pearl and her claims of Michael Pearl being healed of a stroke by receiving Stem Cell treatments. Treatments that are not FDA approved, are quite illegal in the United States, exploit the desperate for large sums of money and are proven to be harmful to some people. She’s promoting these types of treatments at No Greater Joy and in her new book “Create a Better Brain Through Neuroplasticity”

Woo people have pushed those unregulated stem cell clinics to yours truly, but a little research shows one what quackery they truly are.

Debi’s book. A book written by taking a pile of internet articles and twisting them to be about as truthful as the meme I posted above. Without sound science, years of proper testing protocols or anything else. But the problem with using Debi’s advice, or Lori Alexander’s medical advice is that you’re likely to end up with something worse than a sunburned perineum, something with lasting lifetime complications.

There’s a reason doctors go through many years of education followed by more years as interns and residents. Why the FDA had testings protocols in place. Why treatments aren’t just rubber stamped through willy nilly. It’s for our protection.

December 1, 2019
Seducing Your Rapist and Other Awful Commenters?
Next Post

December 3, 2019 Submission Never Fixes a Broken Man!
Recent Comments
50 Comments | Leave a Comment
Browse Our Archives
get the latest from
Nonreligious
Sign up for our newsletter
POPULAR AT PATHEOS Nonreligious
1

Intentional Ministries: When Congregations Are Pastors'...
Roll to Disbelieve
Related posts from No Longer Quivering