Dale Partridge Illustrating How Plagiarism is a Problem in Ministries

I’ll be the first to admit I know very little about Dale Partridge. I don’t think he’s Quiverfull, even if a few QF cultural enforcers like Lori Alexander seem to follow him.

Dale is quite active on Facebook, always posting positive spin type Funda-Gelical messages all over social media. Like I said I’ve paid scant attention since we are more concerned with Quiverfull here.

Looking at his photos I can easily guess what the usual suspects of Quiverfull would say, and none of it is complimentary. The Doug Wilsons, Tim Baylys, Michael Pearls, Steven Andersons et al would judge that beard and trendy clothing. Things that are completely meaningless to indicate the state of one’s soul.

Dale posts a  lot of stuff like this, purported to be ‘deep’ thoughts that seem rather shallow after you sit with them and ponder them awhile 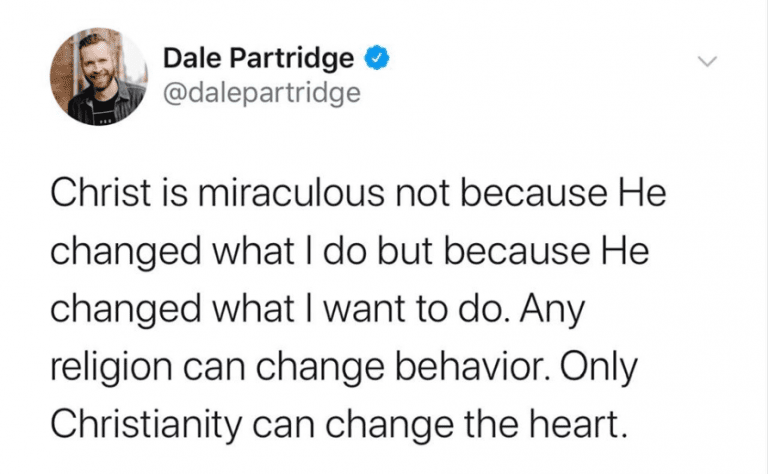 Yesterday one of NLQ’s readers sent me a link to an article by Religion News Service that pretty much accuses Dale Partridge of plagiarizing some of his material from John Piper of Desiring God among others.

The sad thing is that this is not uncommon in Quiverfull or Funda-Gelical worlds. Nearly every day I read something purportedly written by Lori Alexander, or Nancy Campbell or others and realize it was cribbed from another ministry or person’s website. One or two words moved around but largely the bulk is lifted with no changes from someone else. It seems to be a feature, not a bug in many of the more informal Evangelicals.

What do you think? Do you read Dale, or have an opinion on his self-styled Christianity devoid of any legitimate links to established denominations and his creative borrowing?

January 7, 2020
Pretend You Love Him and You Will - Debi Pearl Misunderstands Brain Chemistry Yet Again!
Next Post