Failed Male Headship Leads to Surrounding Yourself With Awful People During a Pandemic?

Failed Male Headship Leads to Surrounding Yourself With Awful People During a Pandemic? May 6, 2020 Suzanne Titkemeyer

Someone posited the other day that the male half of the she we try not to name *coughcoughcoughLoriAlexandercough* is the biggest failure as a Good Christian Patriarch. He is a good example of pretending to be a protector that fails in every single way that he claims his religion succeeds.

Still not directly mentioning the names of this couple because I have no wish to be their narcissist supply, confirm their own confirmation bias that tells them they are right, and feeds the martyrbating egoism. I will not affirm their emotional illnesses here.

First there’s the matter of the story about how awful their marriage was that we’re been publishing here. To live that many years in such misery that seems not much different than the current misery is the definition of insanity. When you keep doing the same things and expecting a different outcome.

Secondly there’s the issue with her constant all hours day and night presence online and social media, indicating he’s allowing her to neglect him, the house and everything else she should be doing. How on earth is anything getting done like mopping, cooking and lurving if she’s always sitting at her laptop keyboard? Even during a pandemic it behooves you to get up and at least take ten minutes to walk around the yard and smell the lemon tree flowers. You’d think he would care enough about her mental state to moderate her hours online.

It’ s not emotionally healthy for anyone to fall down the internet hole that intensely. This is why I take time off from it, schedule my day so I’m not just sitting here looking at things like is Jonny Quest’s dad gay or about the anus patrolling of the Charmin Bears for hours on end along with a mix of people yarping at me telling me that my opinions are always right. I know personally where my limit is, and how to stay mentally healthy. Which leads me to my third point on his failures.

Third he allows her to exist only in an echo chamber of her squealing fans. That’s not healthy for anyone. How can we hope to grow and reach our full potential when we are surrounded by virtual ‘yes men’? Change happens when we’re exposed to new ideas and thoughts, not when everyone is massaging our egos. One of the problems with not being confronted on bad ideas is that they tend to be reinforced and grow into something monstrous. Instead of trying to keep her grounded in the reality of the Bible and the love of God he enables her worse impulses and lies.

We’ve watched this happen slowly over the last ten years. There was a time when her original blog, Always Learning, was only occasionally toxic. I’d skim, realize that day’s posting was just mostly harmless and move on. Then I noticed she was posting more toxic ideas, and this just kept escalating, like some bizarre one-up-manship that no one should participate in, culminating in her book ‘The Power of the Transformed Wife’ and the new blog to go along with it.

Now we’re in uncharted waters of an ocean of toxic ideas, lies and strange hatreds in this time of COVID 19. She has not been shy about embracing bad ideas, fake cures, and spewing out toxic medical advice even if she’s not a doctor. Yesterday’s video of her medical advice was a new low in her lies and medical advice. She should face legal consequences for the medical advice she gives out without being a licensed physician. I was personally so triggered by it I had to do a video pointing out that the only person telling you what homemade remedy, supplements and  real medicines you should be taking should be your doctor, not her.

That leads to point four – surrounding oneself with truly toxic and despicable people. Even her fans have started to notice that’s she’s gone off the deep end there and started to protest, leading to her closing comments and doing a lot of editing and banning. Think about this for a second. She’s doing this in the middle of a pandemic! Deliberately spreading the worst hatred and fake news. 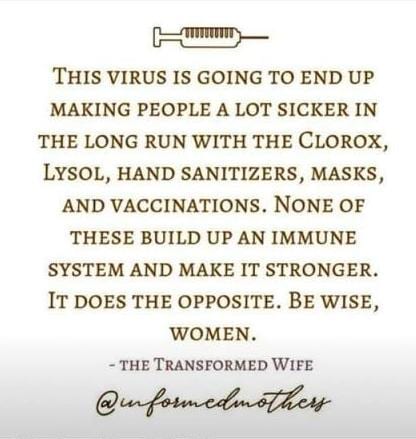 Example. The other day she shared her words as worked in a meme by a Facebook group named “Informed Mothers”. This is a group run by a woman named Gigi Kundalini and is full on conspiracy theory embracing and no vaccines. It’s another anti vaxxer page on Facebook hiding behind the words on motherhood to keep from being deleted like Facebook has done with so many anti vax groups for promotion of sheer lies.

Gigi is a piece of work. Gigi’s all in on MLMs and sales, and uses a number of her conspiracy groups to promote her MLM sales. Gigi’s all over the fake health news groups more than this wife. And this is who the wife decides to align herself with? Even the wife’s usual crew of enablers became upset and tried to warn her when she posted the meme.

If it were merely other loons who think that masks cause lung problems (here’s a hint, they don’t! according to Johns Hopkins, NIH and Mayo Clinic!) that would be one thing, but at the same time she embraces the worst of manhood too, guys like Kyle Trouble. 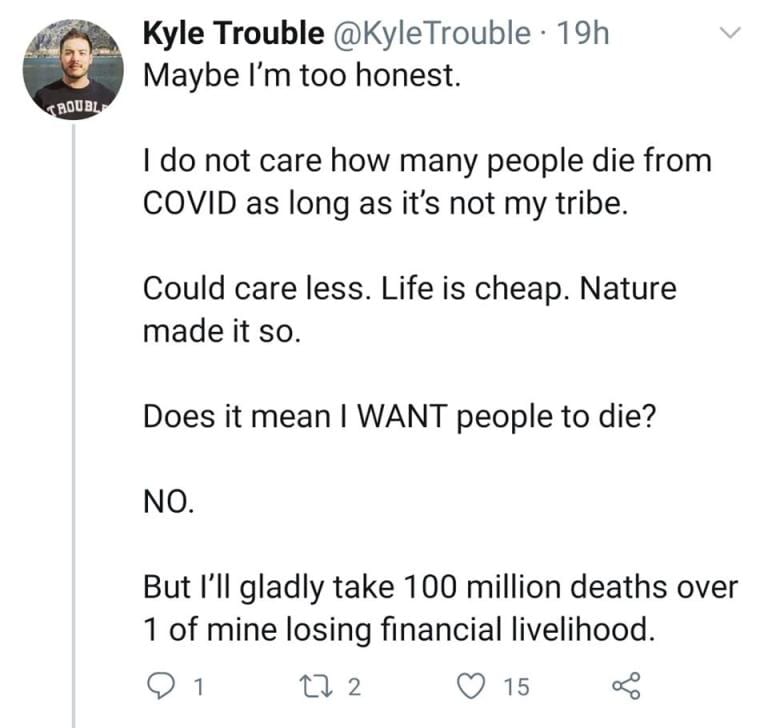 Yeah, one of those guys, her personal troupe of Red Pill men. Constantly posting a stream of women-hating detritus on his Twitter account while trying to say he’s merely a nice guy trying to help other men find love overseas. His websites look like a combination of idiotic pickup artists and extreme woman hatred.

This is who this wife chooses to embrace. Her husband makes no attempts to be a moderating influence on her aligning herself with hatred like that. Unlike what he says he believes in he ultimate has no influence, effect or power over her. Another toothless lion spending more time trying to talk to other woman online, issuing invitations for coffee, dinner and new jobs. Yes, he offered a stay at home mother with small children a job at an orthodontic practice in Oklahoma in complete opposition to everything his wife teaches.

This all proves what a lie it is that the husband is claiming to guide, protect, help, and suggest anything to his wife. It reads more like he is just happy she is leaving him alone and not attempting to force big green salads down his gullet all the time.

May 5, 2020
Jill Rodrigues and Her Jesus-y Quarantine Parenting - COVID Open Thread
Next Post

May 7, 2020 Corona Virus Response a Feminist Plot - Open Thread Covid 19
Recent Comments
0 | Leave a Comment
Browse Our Archives
get the latest from
Nonreligious
Sign up for our newsletter
POPULAR AT PATHEOS Nonreligious
1

Intentional Ministries: When Congregations Are Pastors'...
Roll to Disbelieve
Related posts from No Longer Quivering