What Exactly is ‘Blanket Training’?

Giving our usual Sunday marriage piece a rest since the male half of the duo lost his father this week in Paris, France. With the COVID 19 flight and travel restrictions in place it’s very likely he will be unable to make the funeral. That has to hurt, and hurt badly.  For more you can read what was described by one of our readers as ‘The ten miles of word salad’ he wrote about his father on his wife’s blog. Godspeed.

There’s been so much talk lately in the reality television world about exactly what ‘Blanket Training’ we need to go over this very basic tenet of Quiverfull.

Most folks in America had never encountered the term until that very first Duggar television special “14 Kids and Pregnant Again” Michelle Duggar first uttered those words on that special, explaining that it was a good Godly way to start teaching a child self discipline. She gave the simple explanation, if I recall correctly, of placing a baby on a blanket and giving them a little swat with a wooden spoon when they moved off the blanket.

The Duggars edited that bit out in airings of that special after getting some unwanted pushback to the idea of harming a baby. They’ve rarely referred to it again in writing or on the show. But it remains a solid part of their child discipline beliefs.

Here is video of Michelle Duggar struggling to control the behavior of Joy Anna and Jed, outtakes where she’s not pulling out the rod, but it seems like she might be itching to do just that. Keep in mind this was filmed right about the same time that Josh was taking advantage of his sisters. Josh was sticking his hand up this little girl’s skirt as a teen. TLC had to know what happened.

What Michelle didn’t tell people in that first special is that ‘Blanket Training’ is the brainchild of one very abusive Christian patriarch by the name of Michael Pearl. Pearl talks about blanket training in his book on child discipline “To Train Up A Child.” The best way to describe that book is to say that Pearl’s methods always boil down to hitting a child with an implement for any rebellion perceived or imagined. He talks of using 1/4 inch plastic plumbing pipe, a rod of correction, a wooden spoon, or paddle. The book has been linked to the deaths of Lydia Schatz and Hannah Rose and many others.

In recent years the Pearls downplayed the abuse, editing and adopting other loaded coded language instead of the original bald faced words. Using words like ‘switching’, like it’s a harmless little swat that doesn’t even hurt. While saying elsewhere in the book that the discipline must hurt enough to break the child and bring about submission and humility.

A video of the Pearl’s child training before they softened the book. Warning – this is hard to watch.

“Blanket Training” is a technique in the Pearl’s book that involves putting a 6 month old baby on the floor on a blanket, putting a few toys just off the blanket, and then hitting the child with an implement like a wooden spoon if they attempt to move off the blanket towards the desired toys. Tempting the child, then beating them the second they show any inclination to take the bait. Very cruel.

Surely no one still does that, I hear you say. Oh yes they do, they just hide it better than they used to do. Here are screen caps from that hidden secretive chatroom connected to Lori Alexander’s old site Always Learning. This is a recent post too. 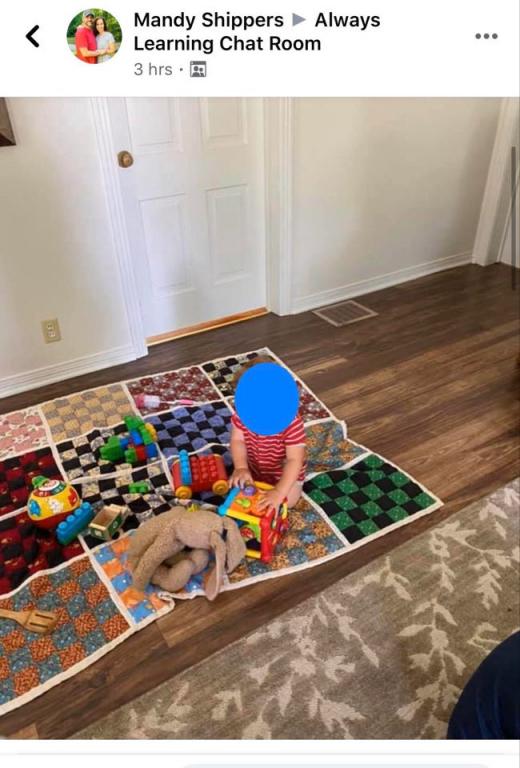 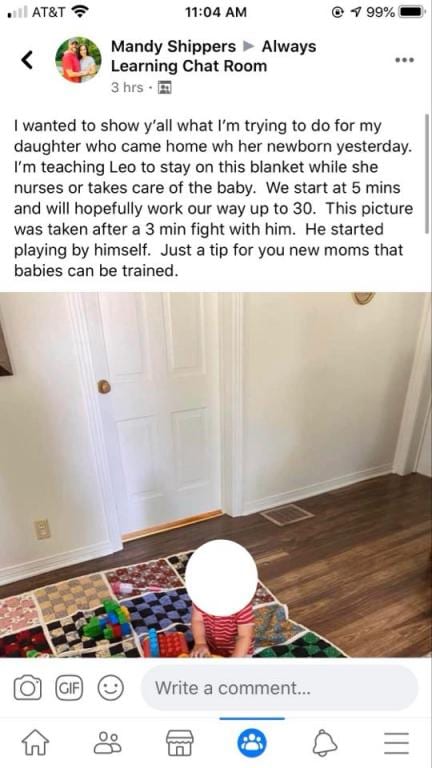 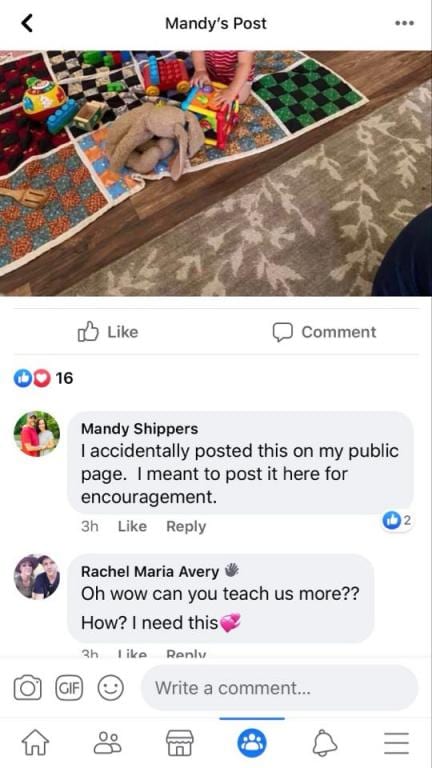 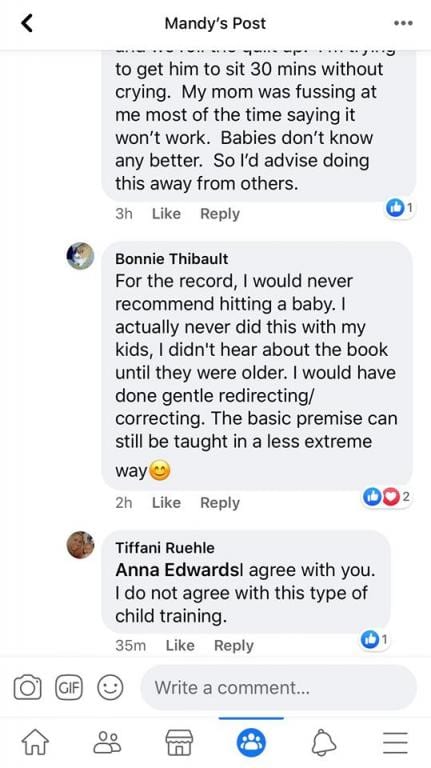 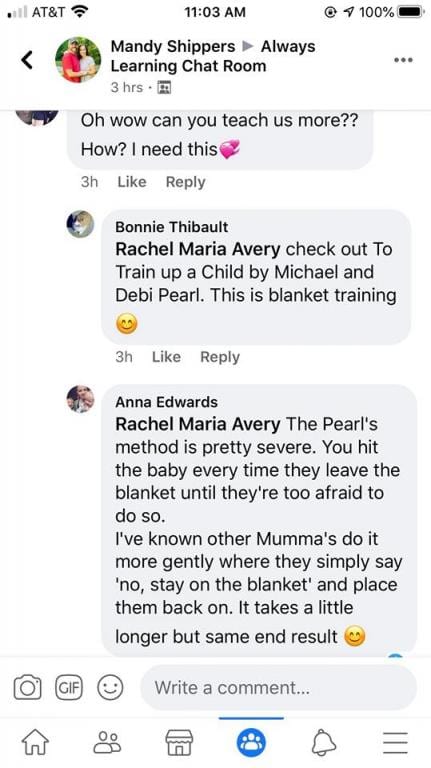 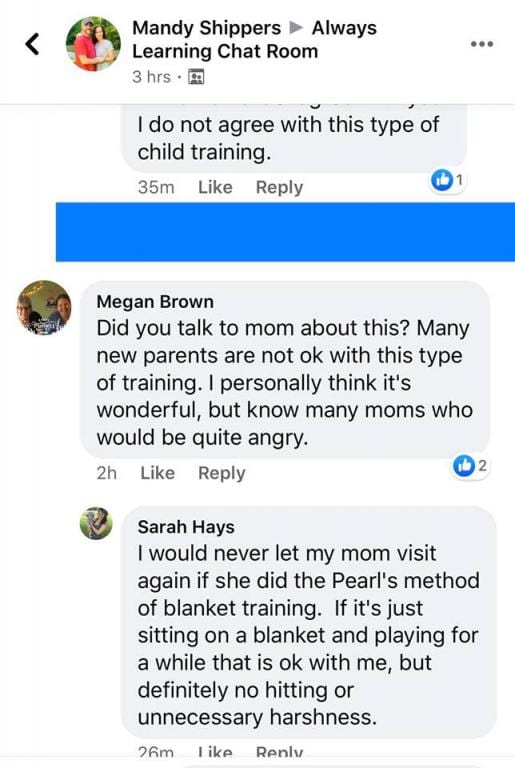 Notice that there is a wooden spoon actually on the blanket. While the poster never states she hit the child the very presence of the spoon means it’s quite likely she did.

Blanket training at it’s most simple is beating a baby until it learns to stay fearfully on it’s blanket.

This is child abuse! Why none of these people use a Pack N Play, or a door gate, play pen, walker, bouncer of the other myriad ways to distract a small child or baby that does not involve beating them we will never know. This is the reality of blanket training, it involves abuse and inflicting pain, and there are better solutions to this problem.

While doing a little research for this I ran across two rather curious films that the Duggars have apparently taken part in. One titled “Birth Control: Is It Up To Us?” pretty much makes a lie out of Jim Bob Duggar’s claims that the family is not Quiverfull.  Here’s the trailer. This is Quiverfull.

and some Duggar sponsored thing called “The 5 Day Adoption.”

Has anyone seen the second one or have any idea what it is?

May 30, 2020
Systemic Racism Translates Into Calvinist "I'll Pray For You"?
Next Post

June 1, 2020 Suzanne Venker, Gender Genocide, Toxic Masculinity, and "Mrs. America"
Recent Comments
0 | Leave a Comment
"This is late, partly bc of my preoccupation and partly bc I'd been slowly reading ..."
Jennifer Serena’s Serenity – Luxury Hotel, Birthing ..."
"Thank you for your commitment to truth and love, Suzanne. Best wishes to you and ..."
Meredith Anne Not a Goodbye, More of a ..."
"For what it's worth, I've learned a lot from you about a Very Creepy movement ..."
Gwen Pryce Not a Goodbye, More of a ..."
"Unfortunately, this kind of satire (if it even is satire) is what gives Christianity the ..."
Emily Is Biblical Gender Roles a Big ..."
Browse Our Archives
Related posts from No Longer Quivering