We are on chapter 2/part 3 of our review of Doug Wilson’s rather racist tome “Black and Tan” Last week is here.

This week starts with Doug’s remembrances of the 1950s in Annapolis, Maryland. Great, Paw-Paw’s racist rantings about how he misses his childhood when women and black ‘knew their place’.

Doug starts out waxing out that his bucolic elementary years were spent in a white elementary school and that the blacks had an equal elementary school just down the block. Then integration hits. He says his own father did the redistricting of school maps to integrate the schools and his younger siblings ended up being the lone white kids in primarily black schools as most whites reacted with “Oh no! Not my kids!”. White flight into private white academies occurred.

He complained because his father was so instrumental in ending segregation in Annapolis that he and his siblings bore the brunt of it. He claims his sister got beaten up when Martin Luther King Jr. died. At least we see where his racism started.

I cannot speak to the tense racial situation in Annapolis, any more than I can speak to what happened to integrate the public schools where I was raised. I went to private Catholic schools, and we already had African American kids attending by the mid 60s. Just a few, but enough that as a kid I didn’t think anything of it, assuming that most schools were mixed. It’s funny what life long lessons we pick up about culture in early childhood. I would see coverage of integration in places like Southie in Boston and wonder why they were so violent and insanely against it. Sheltered in my protected bubble.

Then Doug’s father moved the entire family to Ann Arbor, Michigan, a place I have some knowledge of. He bemoans the radical left and democrats running rampant in the area, without understanding this is more typical of university towns, which Ann Arbor is, than most places. He calls Ann Arbor “Liberalism on steroids!” ha!

He talks of the racism of the black kids at his high school, how he ended up on a racial harmony sort of panel and the outrage of one of his co-panelist over the children’s book “Little Black Sambo”

“But Sambo was not an African-American; he was from the sub-continent. And besides, as I recall saying that evening, I had nothing but the highest respect for Sambo. If anyone asked me to turn tigers into butter for my pancakes, I confess that I would be entirely nonplussed.” 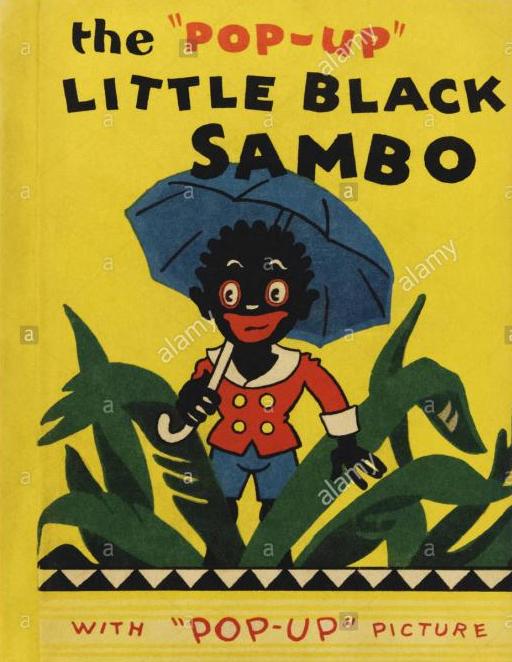 Doug seems completely unable to understand that the problem with the book is less about the story, which is a cultural tale common in India and parts of Africa, than with the illustrations. Most copies of the book were illustrated with the “Pickaninny” style, which showed people of color in a very unflattering light and continued racial stereotyping during the “Jim Crow” era.

Continuing reading Doug’s dubious tales of fighting for white rights and speaking of his semi-historian father I am extremely puzzled how an educated man holding liberal views on race like Doug’s father managed to turn out such a racist nutball as Doug. This is all followed by more dubious tales of his color blindness and many friendships with the local negroes.

“It was odd how the same family could be considered ‘nigger-lovers’ in Maryland and racists in Michigan.”

Okay, I am not bandying about those two words that start with N for shock value. They are in Doug’s book, scarily enough. He goes on to claim he’s no racist because God sees all races the same. Gee, you could have fooled me!

“Enslaved blacks in the antebellum South who came to faith in Christ were coming to something far greater than personal forgiveness. Where the Spirit of the Lord is, there is liberty..”

Slavery and liberty cannot exist at the same time, in the same way, in the same place. Wilson’s reasonings are ridiculous. The rest of the chapter is pages upon pages of word salading that tries to excuse all the bad racist behavior in America as cultural, and makes many claims that Jesus owns us all.

I am not going to post a book today. I am going to point out that the photo I used today is of a sad historical spot that deserves to be restored and acclaimed more than it is. It is the Cub Run Primitive Baptist Church in Centreville, Virginia on Compton Road. It was founded very early, and it one of the first black churches in Virginia. Owned by freed people of color named Harris, who were freed in the 1790s. Supposedly there is a committee working to restore the building. It should be listed as a Historical place, but yet again overlooked.

He explains what a “Black and Tan” is at the end of the chapter, never once picking up that this is something of an insult in Ireland, offensive and English. Next week Doug uses scripture to support the notion of slavery.

August 9, 2020 Did the Trump Campaign Shake Down Jerry Falwell Jr to Endorse Trump?
Recent Comments
0 | Leave a Comment
"This is late, partly bc of my preoccupation and partly bc I'd been slowly reading ..."
Jennifer Serena’s Serenity – Luxury Hotel, Birthing ..."
"Thank you for your commitment to truth and love, Suzanne. Best wishes to you and ..."
Meredith Anne Not a Goodbye, More of a ..."
"For what it's worth, I've learned a lot from you about a Very Creepy movement ..."
Gwen Pryce Not a Goodbye, More of a ..."
"Unfortunately, this kind of satire (if it even is satire) is what gives Christianity the ..."
Emily Is Biblical Gender Roles a Big ..."
Browse Our Archives
Related posts from No Longer Quivering