We do not cover the antics of Girl Defined – Bethany Beal and Kristen Clark very often because they seem to be pretty silly lightweights in the world of Evangelical Quiverfull. Remember that giggling video they did saying QF wasn’t real and NLQ founder Vyckie Garrison was exaggerating her story? How about the time they both claimed they could have been super models except for the faith in Jesus, despite the fact neither fit that look or body type? How about all that ridiculous girlish pap about modesty and defrauding men?

Once the twosome went from a blog and a single book to discovering YouTube video blogging and a pile of other books they’ve managed to be influencers on the Evangelical Christian girl waiting for Mr. Right in modesty scene, with conferences and all! Products, books and conferences, turned into a big business for them.

I always picked up a potential mean girl vibe, like Lori Alexanders in training, from both of them. Sort of a Regina George thing. But that may just be my own gut reaction to girls that praise their Nazi greatgrandpa in dumb blonde seeming cutesy-ness. This tweet of theirs sums up everything about them that horrifies me. How middle school and juvenile most of their thinking is: 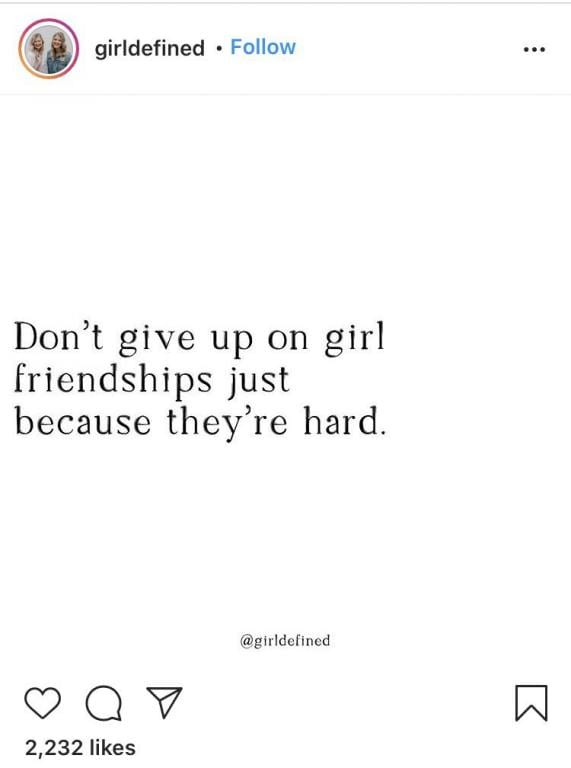 No, no, no, no!!!! Friendships with other women are not hard if you are both no longer piles of hormones preteens with a mountain of insecurities, petty jealousies and self loathing. This is strictly an issue of immaturity! The only adult women I find hard to maintain friendships with are judgemental people like Lori Alexander and those that try to sell me an MLM.

A few weekends ago they held their Girl Defined conference. It was an online conferences instead of their usual speaking engagement, so no one spread any plague rat cooties or COVID. And one aspect of that conference has been troubling.

Someone pointed me to Reddit and the people upset that they did not receive what they were promised in their $79 dollar conference package. From Reddit.

I attended the Girl Defined conference at the $39 ticket level and am in the conference Facebook group. My ticket was paid for fair and square, I was respectful of the space and the people, and I followed all of both the Girl Defined and the Fundie Snark ground rules the entire time. (I even resisting sharing sweet, sweet receipts when GD sent out an email about not sharing individual tickets less than half an hour after a fundie snarker pointed out this obvious loophole.) I was truly just there for the snark. However, I needed to share something very troubling.

At the $79 VIP ticket tier, Girl Defined promised access to a private Zoom Q&A with Kristen and Bethany for VIP attendees only. The link to the Zoom appeared to have gone out quite some time before the conference. However, there is a post in the conference Facebook group in which at least five (!) different women expressed that they never received a Zoom link for the private VIP call, despite having purchased the $79 VIP ticket, and consequently missed the call. This could be chalked up to a mere mistake (and I do think it was genuinely a mistake at first) so I wanted to wait a few days before doing anything to give Kristen and Bethany time to remedy the situation. However, it has now been six days since the conference and GD has actively been ignoring the situation, despite several girls having brought the error to their attention. Both the Girl Defined Facebook page as well as Bethany’s personal page have been tagged a combined total of three times in that thread of comments alone, and they have not replied. One attendee said she has emailed them about this a few times and gotten no answer and that she was bummed because the Zoom call was what she wanted most from the whole conference. (Word for word, that is what this girl said.) Another attendee remarked that she DID receive an answer from them on Instagram DMs and was told that they would send her the recorded Zoom call, but, she added, “it’s just not the same.” I agree. It’s not.

What makes this whole situation more appalling to me is that Kristen and Bethany absolutely know that there was a problem with sending out those Zoom links and are truly trying to brush over this whole situation and sweep it all back under the rug. (What makes it even more gross, if that’s even possible, is that the girls who missed out on the call are mostly just sitting down and accepting that they missed out, which is EXACTLY what GD’s teachings have primed them to do. It’s hard to stand up for yourself when you’re taught you aren’t enough, you shouldn’t love yourself, and you should submit to authority.) I swear, I’m 100% serious: They know what they’re doing. I was able to find FIVE different posts/comment threads from before the VIP call happened in which attendees expressed that they never got the link in their email, and GD replied and said they would send out the links again. To no avail, apparently, as it was after the call that it came to light that at least five women missed out. The current thread about missing the VIP call is one of the top posts in the Facebook group and, like I said, they’ve been tagged by three different people. They didn’t miss it.

Girl Defined crew, this is not okay. You can’t write me off for my atheism, my sexual orientation, my political leanings, or any other unrelated identifier that you would usually invoke to dismiss criticism. This is an issue of morality. Are you going to do what’s right and take an hour out of your useless lives to give your followers what they actually paid for, or are you going to avoid, avoid, avoid and shirk accountability like you always do? Your conference attendees have been so kind in extending grace to you for this mistake, and as much as I do not approve of your self-hating, psychologically damaging, bigoted, abusive religious rhetoric, I maintain that you OWE them the thing they paid for. Anything less would literally be a crime. So: if you’re the amazing, God-honoring martyrs… sorry, I mean, Christian girls you say you are, maybe, I don’t know, do the right thing for once? It wouldn’t be that hard.

Note: I’m not including screenshots in this post for the sake of assuring the privacy of those who attended the conference, and (sigh) in keeping with the conference rules, however, I have sent screenshots to the mods for verification that I’m truly not making this up.

Kristen and Bethany: if there’s a hell, you deserve to burn in it.

Yes, I think someone, or two someones, owes some conference goers at least a partial refund. Plus apologies to make, crow to eat, etc…

Before we pat them on the back too much for avoiding spreading around the Coronavirus that link in the piece above leads to discussion of a “Group” discount rate offered to a group of viewers all together somewhere watching this.

I’m not sure if anyone has posted about this, but I saw GD’s post about the conference going online and I am wondering this: what makes them think that anyone is going to buy a ~$100-$400 package for a “group viewing” instead of just buying a $39 single ticket to watch with other people?

Obviously, people shouldn’t be gathering in a space to watch this (for many reasons) but how would they even know if a bunch of people just watched on a single ticket package? Like surely they are losing money now that the conference is online.

August 9, 2020
Did the Trump Campaign Shake Down Jerry Falwell Jr to Endorse Trump?
Next Post

August 11, 2020 Steven Anderson - Old People Are Abominations?
Recent Comments
0 | Leave a Comment
Browse Our Archives
get the latest from
No Longer Quivering
Sign up for our newsletter
POPULAR AT PATHEOS Nonreligious
1

Nonreligious
Were the Sacrifices Worth it?
No Longer Quivering
TRENDING AT PATHEOS Nonreligious