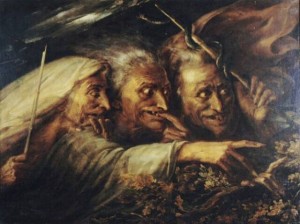 They don’t huddle around the cauldron cackling, “Bubble, bubble, boil and trouble” and they don’t fly on broomsticks or have green skin, ( although come to think of it one witch I knew did have a sick green-ness about the gills, but I think that’s because he was a drunk) but they do cast spells and put curses on people and they do worship Satan, and don’t be deceived by the “white witch” lark. There’s no such thing. All magic is black magic because of the philosophy behind it: those involved in witchcraft seek power, and anybody who seeks power for it’s own sake is bad.

Think of all the wicked people who justify their quest for power by saying it is for a good cause. Almost all evil in the world is caused by people who think they’re doing it for a good cause. Not just Darth Vader. Think of the Nazis who really believed the concentration camps were necessary in order to bring about a master race…see what I mean?

Furthermore, if you invite diabolical powers into your life. Don’t be surprised if they show up, and don’t be surprised if, once you’ve opened Pandora’s box you can’t get the lid back on. Remember in all the fun that the purpose of Hallowe’en is to scare the spooks away–not invite them in. Dressing up as monsters has the same purpose as putting gargoyles on cathedrals–you’re supposed to be scarier than the devil in order to give him the creeps and send him running. So when you carve a jack o’lantern make him scary as you can, but say a prayer as you put him out that he might keep away the real monsters of the night, and if you dress as a ghoul or a ghost or a witch or a warlock remember that you are doing so to creep them out and say a prayer of deliverance from all the dark forces of the world.

And if you come across anyone who takes witchcraft seriously tell them politely that if they summon the devil he will probably come, and that messing with the occult is the spiritual equivalent of an eight year old kid taking a five gallon can of gas into a fireworks warehouse then playing with matches.

November 1, 2011 For All the Saints
Recent Comments
0 | Leave a Comment
"Catholicism has always defined the ideal but there are no limits on God's mercy and ..."
Guest Tony Palmer: Is There Salvation Outside ..."
"With all due respect, Shaun, are you relegating the actual Faith to whatever the local ..."
PGMGN Notes on Tony Palmer’s Funeral
"There are good parking valets and bad parking valets. There are good housesitters and bad ..."
Elliot Bougis The Case for Conversion to Catholicism
"did you vote for Bush Fr Longenecker? would you have?"
Petey Understanding Iraq
Browse Our Archives
get the latest from
Catholic
Sign up for our newsletter
POPULAR AT PATHEOS Catholic
1