Sin and the Synod

I have now read what some are calling the “Relativistic Relatio” from the Synod on the family and I’m afraid that I am not impressed.

It is not that the language is wishy washy, vague and confusing to the faithful.

I’ve commented on that here and here.

It fails to impress not because of it’s supposed “radical shift in the Vatican approach…” but because there hasn’t been a radical shift.

The vague, wishy, washy language is simply more of the same: “We really must be kind and try to listen to everyone and give everyone a warm welcome because they’re all feeling terribly hurt and wounded” that we’ve been hearing for years from the Catholic leadership.

If this document were a radical departure from the Catholic leadership it would be saying things like, “We whole heartedly affirm the joyful way of self sacrifice and supernatural living that men and women share as they embark on the adventure of life long marriage. Longing to co operate with God in the gift of new life, this radical and dynamic way of life offers a glimpse of glory and a profound way to walk in the most abundant and fulfilled path for human life. We acknowledge that this is a difficult pilgrimage, a mountain to ascend and a narrow way and few there be that find it.”

Now that would be a radical departure.

Instead it is more weary self flagellation about how we have not welcomed everyone and how we need to listen to the voices of the victims.

I’m all for listening to the voices of the victims. I’m also in favor of being with the victims and helping them out of their sorry state.

I read through the Relatio with all my powers of giving the benefit of the doubt switched on.

We must remember this: it is only a mid way discussion document. That’s it. The final document will not be out for a year, and we have the second half of this particular synod still to go. Secondly, a synod like this is not going to change doctrine or discipline. They are all going to paddle about in the shallows publish some stuff about being nice to everyone, make a few headlines and then tootle off home.

Nevertheless, when I read the Relatio what struck me as most disagreeable was not the compromising opinions about homosexuality, co habitation and alternative forms of family, but how lacking it was in some very fundamental principles and ideas of the Catholic faith.

There was a good bit of talk about “the expansive love of Christ” and “our gaze fixed on Christ” some references to church documents but very few references to Sacred Scripture or the gospels. This is in stark contrast to the documents issued during the pontificates of Popes Benedict XVI and John Paul II. Instead it was very big on discussion of social change and economic pressures.

The introduction of “Graduality” was done by referencing the idea that we accept non Catholic Christians and non-Catholics as having some share in the divine life albeit partial. This, it was suggested, was a good analogy for those who are not in a “fully sacramental” marriage relationship.  Is it? The analogy breaks down when we think what happens if a non-Catholic wants to be part of the Catholic Church. We say, “Good. You need to be baptized and confirmed and join the church. That means you can’t go to the Episcopal Church and take communion any more. Got it?” We’d do the same for a divorced and remarried couple, but it is being suggested that we somehow say to the divorced and remarried couple, “You can continue to live together as man and wife and come to communion and that’s okay.” To continue the analogy that would be like saying to the Muslim convert. “You can be baptized and worship at the Mosque every week instead of Mass.” I don’t think so.

What was most striking was the absence of all mention of sin and repentance. I sat up and took notice of the words conversion here in para. 28-29

For this reason, what is required is a missionary conversion: it is necessary not to stop at an announcement that is merely theoretical and has nothing to do with people’s real problems. It must not be forgotten that the crisis of faith has led to a crisis in matrimony and the family and, as a result, the transmission of faith from parents to children has often been interrupted. Confronted by a strong faith, the imposition of certain cultural perspectives that weaken the family is of no importance.

Conversion has, above all, to be that of language so that this might prove to be effectively meaningful. The announcement is about letting it be experienced that the Gospel of the family is the response to the deepest expectations of a person: to his or her dignity and its full realization in reciprocity and communion. This is not merely about presenting a set of regulations but about putting forward values, responding to the need of those who find themselves today even in the most secularized countries.

They lost me here. I thought conversion was  the gut wrenching kernel of the Christian gospel: “Lord Jesus Christ, Son of God, have mercy on me a sinner.”

Instead their definition of “conversion” sounds like some sort of sociological gobbledegook. “the gospel of the family is the respond to the deepest expectations of a person: to his or her dignity and its full realization in reciprocity and communion…” What? 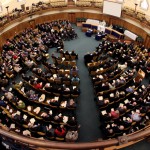 October 14, 2014 Why I Distrust Church Synods
Browse Our Archives
Follow Us!