11 South Asian Accessories and What They Really Mean–a reaction

A friend posted this link on Facebook to an article called “11 South Asian Accessories and What they Really Mean” by Aarti Olivia. It is an explanation of some of the most common culturally misappropriated aspects of Indian culture. And there’s still something missing in this conversation.

It’s tricky because I don’t want to lessen the voice of a marginalized person. I don’t want to make it all about me. I don’t want to be “not all white people.” I don’t want what I do to be a microaggression to someone else (and please don’t make fun of that concept. Being kind to people and believing them when they are hurt by something is not a bad thing).

But when the author says, for example, that the only time it is okay to wear a bindi is for marrying a South Asian person or attending a South Asian event there is zero space for a deeply religious Hindu who is not South Asian to use this mark for its religious significance.

Yes, I wear toe rings and a mangala sutra (okay, not so often these days because the baby pulls on it) and I am not married to a South Asian. I wonder if I should stop trying to defend my doing so. I wonder if I’m in the wrong because it’s never going to not hurt someone’s feelings who doesn’t know me and know the significance it has to me. But I do really want to open up people’s minds about how non-Indians can be Hindu. It’s still a really foreign concept to Hindus and non-Hindus alike.

I ask that if you see me out and about with a bindi on that you don’t assume it’s something I’m doing for fashion or to be cool and that I don’t know the significance of it. But I can’t force you not to be offended by it. I can’t tell you how to feel about a non-Indian Hindu. Still, so far I’m continuing to lean towards not hiding or denying my religious beliefs because I wasn’t born with South Asian ethnicity.

UPDATE: How To Call Out Cultural Misappropriation: My Proposed Solution

What Makes Me A Hindu

Why Am I Called “The White Hindu” 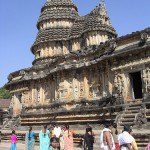 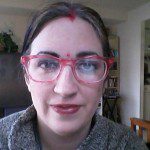 December 14, 2016 How to Call Out Cultural Appropriation: My Proposed Solution
Recent Comments
5 Comments | Leave a Comment
Browse Our Archives
get the latest from
The White Hindu
Sign up for our newsletter
POPULAR AT PATHEOS Hindu
1