Ah, Christmas memories from childhood… Playing elf to my pediatrician father’s Santa at the Children’s Hospital party. Honoring my Swedish heritage by choking down one bite of lutefisk every Christmas Eve. Getting a pile of books about natural disasters and true crime from Grandpa Gehrz the next morning…

Good times. And recalling such rituals reminds me that I shouldn’t be quick to judge the way that other people celebrate Christmas.

But even someone more charitable than me might balk at this version of the holiday:

Christmas is to us Germans the most lovely and meaningful season of the year. From it, we gather inner strength and power from the eternal life force of our nature. Mother and child, family and kin are at its center. It is not limited to a day that swiftly passes, but rather it encompasses a long period of preparation and many mythic beings and customs. Despite many foreign influences, over the course of centuries it has remained an ancient German holiday, and its nature can only be understood within the territory of our people. Today, we have once again come to know the true meaning of our Christmas customs and traditions, freeing them from foreign names and influences…

As translated by retired Calvin College professor Randall Bytwerk, that’s an excerpt from the December 1939 issue of N.S. Briefe, a periodical founded by Josef Goebbels as an “intellectual leadership organ” for Nazi party officials. 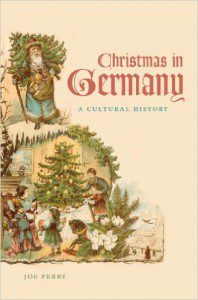 This nazified Christmas, written up by one Wilhelm Beilstein, exemplifies a theme described by historian Joe Perry in his book, Christmas in Germany: A Cultural History.

On the one hand, Beilstein was tapping into a long tradition of seeing in Christmas something distinctively meaningful for the German people. According to Perry, 19th century nationalists like the philosopher Alexander Tille “believed that there was something particularly German about the holiday… organic and unique, a synthesis of the winter solstice rituals of primeval Teutonic tribes, the Christian celebration of the birth of Jesus, and the age-old customs that defined German character.”

But “German Christmas” was neither “age-old” nor all that “organic.” An invention of aristocrats and intellectuals desperate to regain stability after the disruptions of the French Revolution and Napoleonic Wars, it took on new meaning in eras of political, economic, and technological change. “German Christmas was never a set of timeless traditions,” concludes Perry. “Rather, the symbols and rituals of Germany’s most popular holiday composed a fluid and permeable sign system, available for appropriation by a variety of competing interests and groups.”

Adolf Hitler and his National Socialists were just one such group. So how, according to Beilstein, did the Third Reich celebrate the birth of Christ?

#1 – by not mentioning the birth of Christ.

Father Christmas? Ja. The Prince of Peace? Not so much. In fact, 1937 inaugurated a new Christmas Eve tradition: a national broadcast of Father Christmas’s Radio Program, featuring a message from Rudolf Hess, Hitler’s deputy Führer.

And while the Virgin Mary was absent from Beilstein’s version of Christmas, he equated the holiday with “Holy Mother’s Night,” a time when “the shining eyes of her children are a mother’s best thanks for all the work and love she has put into preparing for the holiday.” Indeed, Perry observes that the “Nazification of the family Christmas was primarily women’s work.” Continuing what party ideologue Alfred Rosenberg called “the emancipation of women from the women’s emancipation movement,” Nazi Christmas reinforced the new regime’s understanding of women’s roles: Kinder, Küche, Kirche (“children, kitchen, church”).

Perry’s chapter on “Christmas in the Third Reich” starts with Auguste Reber-Gruber, the director of the women’s division of the N.S. Teachers’ Union. In a 1936 article, she emphasized the centrality of motherhood to the meaning of Christmas: “…the myth of blood, the holy belief in the God-willed order of eternal procreation, of the being and rebirth of the child.” In this line, Perry detects a version of the National Socialism’s “de-Christianized Christmas… [Reber-Gruber’s] attempt, in short, to supplant the birth of Christ with the birth of the archetypal ‘Aryan’ child.” Carols were rewritten in accordance with the new ideology, with one Hitler Youth publication arguing that such songs reflected a pre-Christian, “primordially German” spirit, so “[w]ho would get excited if we changed some words to this or that Christmas song…?”

Protestant and Catholic leaders tried to maintain “conventional religious observances to shelter popular piety from Nazi de-Christianization campaigns” and “the collapsing boundaries between Christian customs and Nazi inventions troubled German women.” (Indeed, Christmas helped to complicate the uneasy church-state relationship that I described earlier this fall.) But Perry was struck just how successful the Nazis were in reinventing Christmas “as a neopagan holiday that celebrated the supposedly Nordic roots of the ‘Aryan race.'”

The Politics of Winter Solstice

In addition to the familial Christmas celebration, note that Beilstein called for a community gathering focused on the winter solstice. Here he quoted his Führer:

The winter solstice fire each year brings many millions of Germans into the winter forest, and forges them strongly together into an unshakable unity. And the solstice fire has always been a proclaimer of Germandom along our borders. In the past, the solstice fire was never a sacrificial fire to some sort of divine being. It was always a reminder, an symbol, an affirmation by our people of the eternal laws of life. It burned in times of trial, and in times of joy. It was lit in 1813 during the wars of liberation, and by the youth movement before the war as it turned away from the stable in Bethlehem and the songs of hosanna to the Son of David.

And what a communal fire it was to be, starting with a “strong, manly dance with torches” led by the SS and symbolizing for Hitler the “spark of enthusiasm that will burst into flame when the people most needs it, the flame in which the traitors, troublemakers, and liars who threaten our people will meet their well-deserved end.” (Under Heinrich Himmler and Reinhard Heydrich, the SS evolved its own neopagan Yule rituals, rooted in “blood and soil” nationalist ideology.)

Perry points out that the Nazi recasting of “Christmas and the winter solstice as a metaphor for the rebirth of the German nation” was actually borrowed from an unlikely source: the Social Democrats. But it served distinctly right-wing ends: “…making winter solstice cookies… or singing National Socialist Christmas carols… constructed fascist identities in the private space of the home.”

Alas, Beilstein added, two months into World War II, “we cannot conduct [the community celebration] this year due to the demands of the war,” but until his long-awaited pan-German unity was restored, Beilstein advised his readers that

Wherever Germans may life, whether in the Brazilian jungle, under Africa’s sun, in the heights of the Carpathians, or in the confusion of New York, they turn their thoughts to the homeland in the Christmas season. Their eyes follow the clouds moving toward German’s soil. Their longing for their home grows, and their memories of childhood come back as they recall their mother’s German words. The ties between Germans on both sides of the border grow stronger which, on Christmas Eve Reich Minister Rudolf Heß speaks over the radio to the most distant people’s comrades, saying that we will never forget them, that they belong to the great family of the German people, which has risen again and has a great future.

Adapted from an earlier post at The Pietist Schoolman. 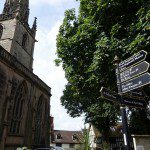 December 14, 2016 The Peace of Christmas during the Pain of Life
Recent Comments
1 Comment | Leave a Comment
Browse Our Archives
get the latest updates from
Anxious Bench
and the Patheos
Evangelical
Channel
POPULAR AT PATHEOS Evangelical
1