When Religious Biography Is Not Hagiography: Woodrow Wilson

Can a Christian historian write a religious biography without falling back into hagiography, a term that evokes ahistorical, moralizing accounts of saints?

That was the question lying behind my three-part fall series on the problems of writing biography, a type of project that I’m still considering. I noted historian John Fea’s retrospective concern that he had been too sympathetic to 18th century diarist Philip Vickers Fithian when he wrote The Way of Improvement Leads Home several years ago. And guest blogger Bruce Berglund noted last week that Christian audiences are still prone to prefer inspiring, heroic tales of principle, faith, and courage to challenging, complicated accounts of compromise, doubt, and fear.

Yet in a 2015 review essay for Christian Scholar’s Review, Rick Kennedy took note of the “emerging genre” he called “the new academic hagiography.” Referring to biographies by fellow Christian historians George Marsden, Grant Wacker, Thomas Kidd, and John Wigger (among others), Kennedy observed that

[i]n this New Hagiography the author must try to analyze methodically while believing. Unthinking piety has to be avoided, but reasonable empathy, even responsible apology, is encouraged. No longer compelling are old methods of analysis based upon suspicion or psychological theories.

Though still rigorous and critical in their methodologies, these biographers are “reverent” and “want their readers to imitate the Christian character of” subjects like Jonathan Edwards, George Whitefield, Francis Asbury, and Billy Graham. (For a longer summary of Kennedy’s article, and a few reflections on it, see this 2015 post at my personal blog.)

Much as I do admire such works, they don’t serve as especially useful models for the biographical project I’m contemplating. Reasonable empathy is one thing, but I’m not sure that responsible apology would be appropriate. Nor would I hope to encourage imitation of the subject.

And I’ve no interest in telling the story of a pastor, evangelist, missionary, or theologian. But then why must religious biographies focus on religious professions? For those of us who believe in the common priesthood, there’s no reason to think that the spiritual lives of those given other vocations and gifts aren’t also significant.

biographies of prominent men and women whose eminence is not primarily based on a specifically religious contribution. Each volume provides a general account of the figure’s life and thought, while giving special attention to his or her religious contexts, convictions, doubts, objections, ideas, and actions. Many leading politicians, writers, musicians, philosophers, and scientists have engaged deeply with religion in significant and resonant ways that have often been overlooked or underexplored.

Edited by Wheaton historian Timothy Larsen, the series will even include entries “on men and women who were lifelong unbelievers, attending to how they navigated and resisted religious questions, assumptions, and settings.” But it began last year with a pastor’s son and Presbyterian elder who never lost “his sense that God had called him to a life of service to humanity”: Pres. Woodrow Wilson, as presented by Kidd’s Baylor colleague (and co-author) Barry Hankins. 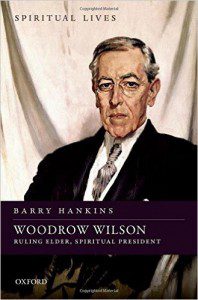 Woodrow Wilson: Ruling Elder, Spiritual President hit shelves in time for the 100th anniversary of American participation in a world war that Wilson first avoided, then accepted, and finally sought to redeem. Indeed, Wilson’s failure at the Versailles Peace Conference brings Hankins to his pointed conclusion: “Having spiritualized the bloodiest war in history to that time, there was simply no way to account for the fact that it changed nothing that was basic to human nature.” While his earlier biography of Francis Schaeffer is mentioned in Kennedy’s “new hagiography,” it’s clear that Hankins doesn’t want his readers to imitate Woodrow Wilson’s Christianity.

A younger Wilson hailed John Calvin as “the great reforming Christian statesman,” but Hankins concludes that the Presbyterian president’s language of calling and redemptive purpose actually came to him by way of theological liberalism and the Social Gospel:

The faith Wilson inherited, then made his own as a sixteen-year-old lad, had been gutted of its content—spiritualized into an amorphous doing of good…. Like most, Wilson was a man of his times, living in an era that had largely lost a sense that the ways of man can never be the ways of God; that, while we pray for the coming of God’s kingdom, it will never come fully through human effort alone.

Interestingly, given the other reason that Wilson has recently returned to national attention, Hankins observes that the 28th president

was always at his least progressive and most cognizant of the depravity of human nature when he addressed the race issue. While all manner of other social and political reforms were well within the grasp of a generation on the cusp of millennial transformation, race remained for him the one national sin nearly impervious to justice.

Of course, when Hankins’ biography came out, Wilson’s name was in the news because Princeton University (where he served as professor and president) refused to remove it from a school and residential college, to the dismay of students and others upset that the university would so honor a president who revived segregation in the federal government. Hankins narrates well Wilson’s infamous 1914 confrontation with civil rights activist William Monroe Trotter, news of which left one initially hopeful African American editor “at a loss as to why the president who professes to walk in the footsteps of Christ should lose his temper when a delegation of colored men called on him to discuss the wrongs that are being perpetrated against their race.”

I think it would have benefitted from a more fully developed contrast with Wilson’s rival-turned-secretary of state, William Jennings Bryan (who shared much of Wilson’s politics, but not his theology), but Hankins presents a plausible evaluation of a Christian scholar and statesman who early on rejected Old School Presbyterianism in favor of “[pursuing] a religion of action, not doctrine,” convinced that “his work… advancing justice, fairness, peace, and even righteousness” in the academy and then politics “was God’s work.” The analysis of the use of a text from Ezekiel (!) in the context of the 1915-1916 Preparedness debate is a nice study of the public use of Scripture. And it’s fascinating to read of professor and university president Wilson’s complicated views on the relationship of religion to higher education — by way of a professor whose own institution has wrestled with living out an ambition “to enter the top tier of American universities while reaffirming and deepening its distinctive Christian mission.”

For all its many strengths, Hankins’ biography also hints at a problem of evidence that cannot be unusual in religious biographies of Christians who made their name outside of the church. After unpacking the religious language in several Wilson stump speeches from 1912, he acknowledges that “[s]uch theologically weighty issues can be addressed only clumsily in a political campaign.” Yet especially in the second half of the biography, the preponderance of evidence backing Hankins’ analysis comes from this and other public examples of civil religion, even knowing that “[m]uch of what [Wilson] said was driven by audience.”

By contrast, consider Will Inboden’s study of religious influences on American containment policy during the early Cold War. While he quoted from speeches given by Harry Truman that “radiate with spiritual language,” Inboden admitted to wondering “whether [Truman] was simply employing religious rhetoric for political gain.” So he checked such public discourse against private, unpublished sources (e.g., diaries, correspondence, marginal notes like Truman’s 1948 scribble deeming “perfectly asinine” a Federal Council of Churches call for peace with Russia) and found that “the president seems to have held these convictions about the spiritual stakes of the Cold War as strongly in private as he did in public.” (Even more remarkably, Inboden came across the prayer diary of a Republican member of the Senate’s Foreign Relations committee.)

In this sense, the chapter on Wilson’s intimate, extramarital relationship with Mary Hulbert Peck (“indiscreet but not improper,” he insisted) is not only the least hagiographic section of a non-reverent biography, but perhaps the most revealing. Although Wilson destroyed most of Peck’s letters to him, she preserved his and wrote her own memoir. (As did Edith Bolling Galt, who became Wilson’s second wife — and his virtual regent for part of 1919.) In a book that otherwise leans heavily on public discourse, that chapter reveals something of the private man who tended to conflate “love for God, romantic love for a woman, and a general love of humanity.”

February 13, 2017
Nicholas of Cusa on the Diversity of Religions
Next Post 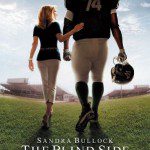 February 15, 2017 Betsy DeVos, Sandra Bullock, and the Historical Cost of School Choice
Recent Comments
0 | Leave a Comment
Browse Our Archives
get the latest from
Anxious Bench
Sign up for our newsletter
POPULAR AT PATHEOS Evangelical
1 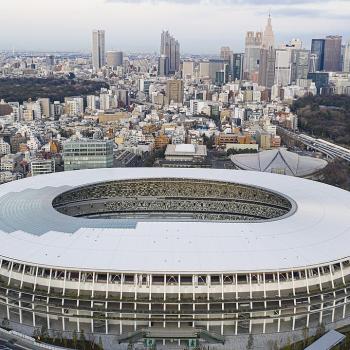 The Circular Relationship Between Culture and the Bible
Many people only want to say the Bible transcends culture. However, the...
view all Evangelical blogs
What Are Your Thoughts?leave a comment
Copyright 2008-2021, Patheos. All rights reserved.