Jesus, Hosea, and the Third Day

Early Christians believed that Jesus had predicted his Resurrection, and associated that event with the third day. They also suggest that such a belief should have been obvious enough to anyone who searched the scriptures. That latter statement is puzzling, as there really is no very clear statement that associates the Messiah with such a third day chronology. Where would you even begin searching? Let me suggest a passage that people might have had in mind when developing these ideas. Finding the passage itself is not the problem, but we have to read it as they read it at the time, and more specifically, in the language they would have used.

The evangelists all have Jesus making prophetic statements about rising on the third day. Luke 18.33 is typical: “and on the third day, he will arise” (kai te hemera te trite anastesetai). Here is Luke 24.46: “Thus it is written, that the Christ should suffer and on the third day rise from the dead (kai anastenai ek nekron te trite hemera). Compare Matthew 20: kai te trite hemera egerthesetai. Jesus says, “Destroy this temple, and I will raise it again in three days” (John 2.19). In the early second century, Ignatius of Antioch used the idea in his Letter to the Smyrnaeans: “The Word raised up again His own temple on the third day.” That phraseology became a core part of Christian doctrine, used in the Apostles’ Creed and subsequent derivatives, like the Nicene Creed: on the third day, he rose from the dead (te trite hemera anastanta apo ton nekron). The third day idea also features in other gospel passages, for instance concerning the sign of Jonah.

The origins of this idea are far from clear. We can find plenty of things in the Old Testament that happened on a “third day,” but the Resurrection link is tenuous. The best linkage comes in Hosea, a text that Jesus reportedly quoted when he spoke of God desiring mercy not sacrifice (Hosea 6.6, Matt. 9.13). When Matthew 2.15 quotes the line “Out of Egypt I have called my Son,” he is quoting Hosea 11.1.

The key passage here is Hosea 6.1-2, which in the King James version reads as follows:

Come, and let us return unto the Lord: for he hath torn, and he will heal us; he hath smitten, and he will bind us up. After two days will he revive us: in the third day he will raise us up, and we shall live in his sight.

Yes, that is being raised up on the third day, but the language of the Hebrew is nothing like as explicit as we might like in terms of being raised from the dead. The NIV renders verse 2 as follows:

After two days he will revive us; on the third day he will restore us, that we may live in his presence.

He will revive us from the two days, on the third day He will set us up, and we will live before Him.

Restoring, setting us up … this is a good way from resurrecting. Also, in the language of the time, these are not days in any specific chronological sense, but are rather used to mean “a short time.”

Christian commentators through the centuries – including Jerome and Luther – have given this text a retrospective Resurrection gloss, but the reading is disputed.

That reading becomes a lot credible when you recall that a great many early Christians would of course have known the text in the Septuagint Greek, and here the Christian resonances become much clearer. In the Septuagint, the passage reads “After two days he will heal us (Ugiasei, ὑγιάσει); on the third day (en te hemera te trite, ἐν τῇ ἡμέρᾳ τῇ τρίτῃ) we shall be raised and live in his presence  (anastesometha kai zesometha enopion autou) and shall know him (gnosometha).”

The word anastesometha  assumes anastasis, the standard early Christian word for Resurrection. It occurs 42 times in the New Testament, variously in the context of the Resurrection of Christ, or the general Resurrection that was the hope of so many Jews of the time. The Luke passages I used earlier have anastesetai and anastenai. If early believers “searched the scriptures” for the language of Resurrection, the Greek version of Hosea would hit them hard, swiftly, and specifically. To quote N. T. Wright, “No Second Temple reader would have doubted that this referred to bodily Resurrection.”

Even better for many early readers, this passage not only describes healing, life and Resurrection on the third day, but also speaks of knowing God, gnosometha, using the concept of gnosis. So gnosis followed Resurrection… hmmm.

What is missing here is any connection between the Hosea text and the messianic idea, and I really do not quite understand this. It would be wonderful if I could point to contemporary evidence that some Jews at the time read the Hosea verse in that messianic context, but I don’t find such a link, and that might be my inadequacy.

The obvious place to look for such a reading would be Qumran. Promisingly, the Qumran sect had a strong interest in Hosea, and Roman Vielhauer has an excellent chapter on that theme in the collection edited by George J. Brooke and Jesper Høgenhaven,  The Mermaid and the Partridge: Essays from the Copenhagen Conference on Revising Texts from Cave Four (Brill 2011). Vielhauer, by the way, is a leading Hosea scholar, author of Das Werden des Buches Hosea: Eine redaktionschichtliche Untersuchung (2007). As I understand it, though, the most important Hosea commentary from Qumran (4Q166) concerns chapter 2 of the prophetic work, and I can’t see obvious material about the chapter six passage that I am discussing here, nor about any messianic focus. If anyone can point me to relevant research, please do so.

Somewhere in a cave in the Judean desert, there has to be a messianic commentary on Hosea 6. Has to be  …

But to return to my basic point, it’s a useful and maybe essential lesson: when looking for Old Testament references in the New Testament, it pays to begin with Greek. If Koine Greek was good enough for Almighty God, it’s good enough for us. 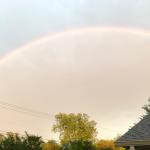 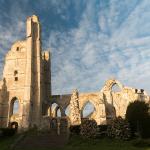 May 14, 2019 When Churches Were Left in Ruins
Recent Comments
2 Comments | Leave a Comment
Browse Our Archives
get the latest updates from
Anxious Bench
and the Patheos
Evangelical
Channel
POPULAR AT PATHEOS Evangelical
1