Both Chris Gehrz and myself have recently been thinking back to the horrendous circumstances of 1918, in light of all the disease and epidemic related news going the rounds today. The influenza pandemic of 1918 especially produced a highly apocalyptic mood in that earlier period. It’s often forgotten what a long shadow that mood cast over the artistic production of the following decade, which among other things produced some of the greatest films ever made. I’ll focus here on one particular triumph of apocalyptic, which is Metropolis.

In the late 1920s, the coming of talking pictures suddenly made obsolete a gloriously flourishing tradition of silent cinema. Many classic silent films were utterly forgotten, and even the best are known today only to academic specialists and dedicated film buffs.  In consequence, our culture has lost some artistic triumphs, including some stunning works of Christian thought and speculation.

Anyone familiar with the silent era can recite the overtly Christian classics based on Biblical themes – Intolerance (1916), The Ten Commandments (1923), Ben-Hur (1925), or The King of Kings (1927). Less often counted in this roster are the megahits of mainstream popular culture, which nevertheless grounded themselves absolutely in Biblical texts, and Christian mystical traditions. I have already written about the stunning 1921 epic The Four Horsemen of the Apocalypse, which was based on the 1916 Spanish bestseller of that name by Vicente Blasco Ibañez.

In Europe too, mystical and millenarian themes permeated the legendary films coming out of Weimar Germany. This is much in my mind right now because of the wonderful Netflix series Babylon Berlin, which continues to impress and amaze, and the present third season is set in the German film-making world of 1929. I offer that praise despite subtitles that were manufactured in the lowest pit of Hell. Long, long, sections of dialogue are left untranslated, including lots that is highly relevant to a complex plot. They spent how much on producing the series, and outsourced the subtitles to an intern? Anyway – end of rant.

As I remarked, the great director F. W. Murnau commonly deployed apocalyptic images, and his films Nosferatu and Faust both depict catastrophic urban plagues that would immediately have suggested the recent influenza. But what might we legitimately call a Christian film? For me, that does not necessarily suggest a strict focus on the central Christian story, but rather something that draws centrally and essentially on Christian stories, beliefs and scriptures, and by that criterion, Metropolis must be regarded as a major Christian film. Let me explain.

The most influential European filmmaker of these years was probably Fritz Lang (1890-1976), whose strongly Catholic interests combined with his attraction to mythological themes. He had seen military duty in the Austrian service and been repeatedly wounded. Throughout the postwar years his films return to themes of apocalyptic warfare and destruction, usually accompanied by plague and spiritual corruption, all of which inevitably recall the wartime rhetoric of cosmic confrontation.

Lang’s 1927 work Metropolis is commonly regarded as one of the classics of cinema, and at the time it was probably the most expensive film ever made. Only in light of recent restoration work can we see how explicitly it draws on apocalyptic themes in its prophetic depiction of modern society. Partly, Metropolis reflects the ideas of Oswald Spengler, whose sensationally popular book The Decline of the West appeared in 1918. Spengler presented nightmare forecasts of the vast megalopolis, ruled by the super-rich, with politics reduced to demagoguery and Caesarism, and religion deformed by strange oriental cults. In the future world of Metropolis, the ruling classes dwell in their own Tower of Babel, while the industrial working class is literally enslaved to Moloch.

Lang borrowed that model but added explicit references to the New Testament, and above all, Revelation’s chapter 12. This describes the awesome figure of the Woman Clothed with the Sun, “the moon under her feet, and on her head a crown of twelve stars,” who gives birth to a messianic ruler. She is the holy and heavenly counterpart to Satanic figures like the Scarlet Woman and the Whore of Babylon. The plot of Metropolis depicts the contest between two female figures who respectively recall the Woman Clothed with the Sun, and the Whore of Babylon. The former is named Maria, while her evil android counterpart is associated with a satanic inverted pentacle.

Through the discovery of long-lost copies of the original film, we now see how directly and extensively the film quotes Revelation, and especially its account of the Beast and the Whore. Repeatedly, we see the visions of cosmic destruction awaiting the futuristic city. So comprehensively Catholic is Metropolis, so utterly Marian, that the ushers should be handing out copies of the Catechism in any theater where it is shown.

And yes, guilty pleasure, I enjoy watching the film to the 1984 soundtrack featuring Queen and others. Freddie Mercury was a dedicated and very knowledgeable science fiction fan: see this video, which integrates chunks of Metropolis.

I should say a word about Lang’s religious background. His mother was Catholic and he was raised Catholic, but he was part Jewish. His wife, Thea von Harbou, who did the screenplay for Metropolis, became an increasingly convinced Nazi and anti-Semite, and the marriage fell apart. At least, that was one reason for the breakup: there were plenty of others.

But whether it mainly came from Lang or von Harbou, the film’s Catholic and apocalyptic element is overwhelming.

Silent cinema produced some of the greatest religious art of modern times. We might call that fact the Greatest Story Seldom Told.

I am adapting this post from a piece I wrote on Aleteia back in 2014.

March 28, 2020
Virtual Field Trips for Your Kids
Next Post

March 31, 2020 The Christians Who Didn't Take Communion... for 350 Years
Recent Comments
0 | Leave a Comment
"Life would be much better if humanity never invented religion but instead focused all that ..."
Christian Moon Gaffney and Catholic History
"I totally agree about Berryman"
philipjenkins Why Pop. 1280 is an American ..."
"I don't see how this relates in any way to what I posted."
NorrinRadd Will This Week Bring an Epiphany ..."
"If you believe that Torah or O.T. bible is accurate, please read Numbers 5:11-31 and ..."
Enlightened Will This Week Bring an Epiphany ..."
Browse Our Archives
get the latest from
Anxious Bench
Sign up for our newsletter
POPULAR AT PATHEOS Evangelical
1 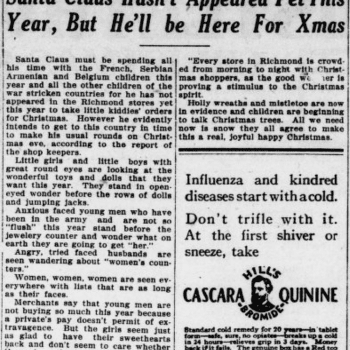 Evangelical
Christmas during a Pandemic: The United States in...
Anxious Bench