Iraqi refugee dreams of home. And her name is a reminder.

It took some time to find the apartment

. It was tucked away in a labyrinth of unmarked streets and unmarked buildings.

Finally, we discovered the staircase that led behind the building. Tapping on the door we were greeted warmly by a good looking couple and their beaming daughter. The apartment was simple, tidy and clean. A picture of Jesus hung prominently in the living room

This was another couple from Mosul, Iraq. Although I had only had less than a dozen interviews, I found myself pre-writing the story. It would no doubt be another version of persecution, loss, and frustration. Yes, the stories in this collection are have many common threads. But these are uncommon people.

The couple smiled and laughed at each other and took my questions with grace, but I still sensed the loss, the sadness. It hung in the air like a coal-fired stove, just waiting for me to breathe it in. 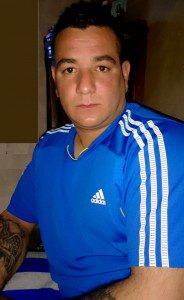 Yousef was a massive man with huge shoulders and rippling biceps. He worked at a gym in Mosul, helping train other bodybuilders

. He was in the process of buying his own gym when the whole region fell to Daesh.

He carried the burden of his family like a grim warrior, lifting the weight of circumstances beyond his control. It showed on his face. He had worked hard to provide for his family. They had a house

with furniture on a little plot of land. It was a home for the young couple who had been married since 2006. And now, it was gone.

“There was a notice, spray painted

on the wall outside our home. It had the sign of the ‘Nazerne’ and told us we had to leave,” said Yousef.

All they could take was a little cash

, their passports, ID cards and a few clothes.

But his wife cut in.

“But we have everything.”

The translator told me it was the Arabic word for “Nineveh.” I was intrigued, wondering about this woman who carried a name rich with geography, history and symbolism.

Nineveh. Was this woman the key to why I was here

The plight of Nineveh, the refugee

Nineveh — the refugee – has a name with a rich and complicated meaning. Growing up, the language used in their home was Aramaic – the same language that Jesus spoke. Her mother’s naming her after the land of her ancestors fit a familial pattern of meaningful names. She has a sister named Dejla, which is Arabic for the Euphrates River.

Her other sister is named Nahrain, which means “land between the rivers.” In Iraq, this is name given to the area of land between the Euphrates and the Tigris river systems.

You might know the area as Mesopotamia, encompassing some of Syria, Turkey, Iran and Kuwait. The fertile crescent provides some amazingly rich soil and corresponding rich heritage. Known as the cradle of civilization it has also been the birthplace of struggle of man against man.

All three sisters are gone now from Iraq, taking the names of the rivers and lands with them.

Nineveh had her daughter dangling on her knee. The girl is just nine, but seems normally adjusted despite her hellish year. “We have told her everything,” Yousef says. “We don’t shield her from truth and it helps her understand why we are in the current situation. We want for our daughter to have security and to study one day.”

The daughters name is also rich with meaning. Christine. “Christ-in-her”

I asked what was next for the young family.

“We want to go home,” he  said. “We want to live a normal life, to have jobs and to live safely. We are strangers here.”

I ask them what they will do if they cannot go home.

They have paperwork started so they can go to Canada.

“What if they don’t take you?”

The couple looked at each other and the silence and the shrug told me what I needed to know.

Almost on que, Nineveh gathers herself and tells me about what remains their glue.

“From the very beginning, Jesus is in our home. Our relationship continues to be strong. Never have we questioned God. Never have we doubted. Not then. Not now.”

Like so many of the others, Yousef and Nineveh ask for prayer for the Christians that still remain in their homeland.

Is this the end?

I write about Nineveh, this wonderful refugee, with a heavy heart. The woman named after the land which has seen so much difficulty and turmoil may never return.

The prophets spoke against corruption and sin and evil. And for thousands of years the land has seen restoration, a haven for Christians in the fertile crescent. But with this rise of ISIS evil and the banishment of righteous people, I hear the echoes of the prophetic voices of Nahum, Jonah and Zephaniah.

In a way Nineveh represents the faithful in this land. She carries with her the name of her home but also the spirit that I’ve seen in so many.

I gulp when I realize there may never be a strand of good in the land again.

So Nineveh, with her sweet smile and resilient faith, is likely to find a new home in a foreign land. She and her family will probably never go home to Iraq.

They’ll have to learn another language and live a different cultured way. When they visit new churches, they won’t sing songs drawn from the saints of old.  The customs that date back thousands of years are but a shadow with the modern Western church.

They are young and will adapt with some struggles, but their lives will be better. Still, it’s sad to see this birthplace of faith scoured clean of faith. The road to this cleansing has been difficult, with the loss of thousands of lives.

In our culture, we define persecution as the mean people who make us take down “God bless our troops” signs from public buildings and force schools to quit singing “Away in a Manager.” Persecution are those who mock us on Facebook or tell us that we can’t pray on football fields.

We don’t know a thing about persecution. But this couple will always have an understanding, a depth of what it means to live for your faith – and give up everything. They were saved. Many were lost.

And at night, they will continue to pray for the faithful that remain.

They’ll pray for the healing of the land of Nineveh.

February 22, 2016 Life after work: Will I be a grumpy retiree?
Recent Comments
0 | Leave a Comment
Browse Our Archives
Related posts from David Rupert