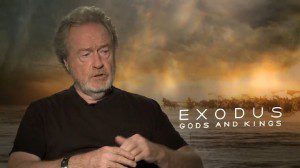 The Facebook page for Exodus: Gods and Kings released a new video of Ridley Scott discussing the movie and how he came to make it today, and along the way he mentions a plot element that I hadn’t heard anyone mention before.

Specifically, he says that the purpose of the plagues is to “turn the population against Ramses, because it can only be the population [that] will make Ramses toe the line,” and that a “revolution” starts when the people raid the granaries and are shot at by Ramses’ archers.

This is a fascinating wrinkle, and one that actually has a sort of biblical basis, given that passages like Exodus 11 make it pretty clear that Pharaoh’s officials and the Egyptians as a whole were siding with Moses and the Hebrews rather than the Pharaoh by the time the plagues were done. The text says Pharaoh’s officials even begged him to let the Hebrews go. So did the common people exert their own kind of pressure, too, by rioting against the Pharaoh’s troops? It’s not impossible.

In any case, you can watch the video below:

November 3 update: The video was released on YouTube a few days ago too:

The film’s Facebook page also posted this 15-second clip of Ridley Scott discussing the chariot sequences, and it overlaps a bit with the longer video above:

November 1, 2014 Newsbites: Women of the Bible! Ben-Hur! Noah! Clavius!
Recent Comments
0 | Leave a Comment
Browse Our Archives
get the latest from
FilmChat
Sign up for our newsletter
POPULAR AT PATHEOS Entertainment
1