A brief comment on the Exodus: Gods and Kings casting controversy 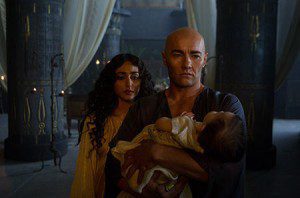 Three months ago, Ridley Scott noted that the actors he hired for Exodus: Gods and Kings represent a range of different ethnicities, and hardly anyone noticed. Last week, he made an off-the-cuff remark about how he couldn’t cast some obscure Middle Eastern actor as the lead in a massively expensive movie such as this, and the internet went berserk.

Scott’s comment was quickly assumed by many people to mean that he was justifying hiring an “all-white” cast. Many people claimed, dubiously, that it would be more historically accurate if the villainous Egyptian slave masters, many of whom are killed by an act of God at the Red Sea, were played by black actors instead. (Just think what sort of controversies there would be if the film had gone that route.)

Jonathan Merritt even went so far as to say today that no Bible movie — not even The Nativity Story, which cast a Maori girl as the Virgin Mary, a Palestinian as her mother and Iranians as her father and cousin Elizabeth — has made any progress when it comes to casting ethnically-appropriate actors. Apparently the fact that Keisha Castle-Hughes was born in Australia disqualifies that film somehow. Seriously?

Murdoch quickly backed down from that remark, and conceded that “there are many shades of color”. Others, however, seem less willing to recognize that fact.

Or so it’s tempting to think, when people go on and on about the “all-white” cast of Exodus as though the cast list on the movie’s website didn’t prominently feature actors like Ben Kingsley (half-Indian), Indira Varma (half-Indian), Dar Salim (Iraqi) and Golshifteh Farahani (Iranian), or as though the electronic press kit for the film didn’t include interviews with Farahani and Hiam Abbass (Palestinian).

(Merritt, for his part, does concede that John Turturro, an Italian-American, might be an “exception” to the pale-skinned actors who have some of the most prominent roles in the film. One could also point to Maria Valverde, the Spanish actress playing Moses’ wife, or Kevork Malikyan, the Turkish-born Armenian who plays her father.)

It certainly requires some suspension of disbelief to accept Christian Bale as a Middle Eastern prince. Bale himself has admitted in recent interviews (see below) that he wouldn’t last very long in the Sinai desert with his pale northern European skin. But I can also understand why the studio would want a “bankable” actor like him to play someone as iconic as Moses. (As Glenn Kenny observed, it’s possible that the studio insisted on having a “name” in the lead after Ridley Scott tried, and failed, to make Orlando Bloom a star with his previous epic film, Kingdom of Heaven.) 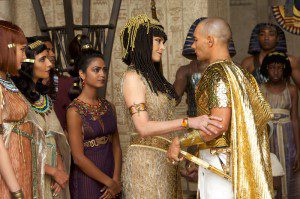 I also don’t buy Sigourney Weaver as a Mediterranean queen at all — just look at how pale her skin is even next to Joel Edgerton’s! — and I doubt very much that her character is so central to the film or its marketing that they couldn’t have hired someone more ethnically appropriate.

In that case, however, I think Scott just wanted to work with a friend again. (This is his third collaboration with Weaver, following Alien and 1492: Conquest of Paradise, in which she played yet another Mediterranean queen.)

Indeed, when you hear Scott talk about why he hired the people he did, that’s what you often hear: he had talked to Bale a few years ago about collaborating on a movie, and at last he found one; or he saw Joel Edgerton audition for one of his earlier movies, and he always wanted a chance to actually hire him for something; etc.

And in that vein, it’s worth noting that Exodus also marks a reunion of sorts for Scott and Ghassan Massoud, the Syrian actor who plays an adviser to the Pharaohs in this film and previously played Saladin in Kingdom of Heaven — an entire film built around Scott’s efforts to be sensitive to the story’s Middle Eastern setting.

Indeed, Scott has made some interestingly “diverse” choices in his other movies too, for example by casting the Latin American Oscar Isaac, who played Joseph in The Nativity Story, as the English King John in Robin Hood. (The historical John was a Norman and was thus basically a French Viking.) And that, too, was a reunion of sorts; Isaac had previously played a minor Iraqi character in Scott’s Body of Lies.

Could he have pushed the envelope even further? Perhaps. Should movies set in the ancient Middle East cast actors who feel more authentic than the Caucasians who have typically dominated these roles? Absolutely, and it’s good to see Arabic, Tamil and possibly even Maori actors playing Jesus in some of the latest Bible movies.

But let’s at least recognize what Scott did do with this film, and what the challenges of casting a film like this are, before we rush to condemn him.

P.S.: Regarding those interviews Christian Bale has given, see the videos below:

December 1, 2014
Watch: Moses before and after his religious conversion in two new clips from Exodus: Gods and Kings
Next Post

December 2, 2014Ben-Hur finds its leading lady, starts casting extras
Recent Comments
1 Comment | Leave a Comment
"In 1972, yes. The movie was made in 1956 but the ratings system didn't exist ..."
Peter T Chattaway One of the reasons I do ..."
"And to think... this movie was rated G? It was."
Bishop One of the reasons I do ..."
"John 7:5 states explicitly that the brothers of Jesus did not believe in him, at ..."
Peter T Chattaway The Chosen starts shooting its second ..."
"Thanks. There is a whole other anecdote in between those two verses. Other relatives, sure, ..."
tmirus The Chosen starts shooting its second ..."
Browse Our Archives
get the latest from
FilmChat
Sign up for our newsletter
POPULAR AT PATHEOS Entertainment
1