Religion on The Bachelorette: Just Under the Surface

Religion on The Bachelorette: Just Under the Surface July 3, 2012 Nancy French 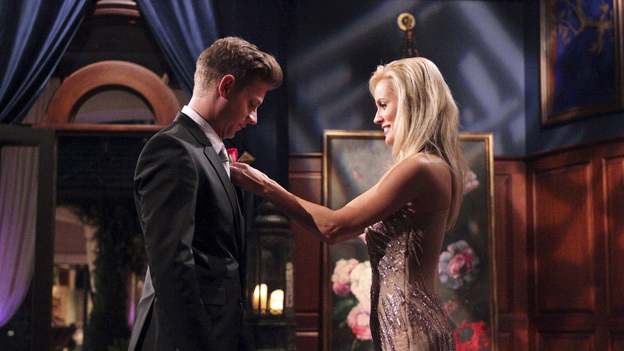 By now French Revolution readers know that I suffer from a malady – an addiction to the Bachelor and Bachelorette.  Judge not!  I know you have your secret television loves too.

The show is fascinating for a million reasons, including one reason common to many reality shows – because the producers work with “real people,” reality television is hardly a religion-free zone.

For example, Emily Maynard, the current Bachelorette, wears a cross bracelet, bought a cross off the street on a date, and frequently claims she’s “blessed.” Though she was not married when she conceived her daughter, she drops clues that she currently has an active faith.  For example, she has said she won’t live with anyone before getting married, won’t have steamy hot tub scenes, and prayed before returning to the very show which broke her heart the first time around.

She’s not the first evangelical to appear on the show. In 2010, Bachelor Jake Pavelka was a Methodist, nominated to be on the show by his fellow church members sick of all the drinking and “overnight” dates featured in previous seasons.  On the first night of his “journey” — the term contestants use for their weeks-long romance — they were asked “Do you believe in pre-marital sex?” and “What is the most important thing in your life?”  (Jake’s answer was “God.”  When asked what his definition of love was, he quoted Scripture.)

But even if people start with religion on the show, it gets lost amongst all the hair extensions, boob jobs, hot tubs.  On Survivor, Amazing Race, and Celebrity Apprentice, Christian contestants come – and leave – with their faith.  What is it about The Bachelor franchise that seems to strip people of any semblance of religious morality?

1. The format of the show doesn’t promote virtue.

It’s silly to point out, but the ubiquitous alcohol, the fast paced – near polygamous – romantic situations, and the constant cameras don’t bring out the best in the contestants.  Twenty five contestants battle to distinguish themselves – sometimes with the flashiest personality, the most flirtatious manner, or most revealing clothing.  With the time limitations, physical attraction is used as a substitute for time-tested friendship and emotional compatibility.

However, compromise isn’t inevitable.  It is possible – in life and in the show – to turn down an invitation for an overnight date.  In fact, Emily did just that when The Bachelor Brad Womack invited her to spend the night, claiming that she didn’t want to set a bad example for her daughter. (With the “overnight date” episode coming up next week, viewers will see whether Emily can hold on to her values.  We’re pulling for her!)  In fact, we’re always hoping the Bachelor or Bachelorette can hold onto their faith and morality as they navigate the complicated, producer-arranged circumstances.  So far it’s been one disappointment after another.

“Listen to your heart” is practically the only value on which most contestants on The Bachelor and The Bachelorette agree. In fact, too many Americans rely on this truism, as shown in, well, every self-help talk show and romantic comedy ever produced. At the end of Jake’s season, for example, host Chris Harrison told us, “Rest assured, Jake’s choice came from his heart.”

Jake said: “I let my heart lead… You have to listen to your heart.”

Our hearts, however, lead us astray.

Jeremiah 17: 9 warns us about our hearts, by saying, “The heart is deceitful above all things  and beyond cure.  Who can understand it?”

Candlelight, revealing gowns, and romantic settings are designed to appeal to our, umm, hearts.  But Proverbs 31 warns us about the temporary nature of charm and physical attraction: “Charm is deceptive, and beauty is fleeting;  but a woman who fears the Lord is to be praised.”

In other words, “listening to your heart” is a recipe for disaster. In fact, after sixteen seasons of The Bachelor and seven seasons of The Bachelorette, only four couples have stayed together: Trista Rehn and Ryan Sutter, Jason Mesnick and Molly Malaney, Ashley Hebert and J.P. Rosenbaum, and Ben Flajnik and Courtney Robertso.  Plus, fans were recently saddened to hear that even host Chris Harrison is divorcing his wife and the mother of his two children.

On normal dates, people talk about casual and deeply meaningful matters.  They talk about more than jobs, favorite movies, and former flames.  They talk about faith – whether they hate religion or embrace it – and what drives them to act, feel, and make decisions in their normal lives.  On The Bachelor, perhaps because of the abbreviated time frame, the most emotional conversations usually occur with dramatic past stories – a terrible injury, their broken homes, or (more frequently) their own divorce.  It’s rare for an actual conversation about values to occur.  (Though perhaps they’re happening, but they don’t make it to air.)

On occasion, faith slips through under the guise of “values.”  Remember when Kacie Boguskie brought Bachelor Ben Flajnik to her Tennessee home and said, “You’re in the Bible Belt now?” and he replied: “I’ve always considered it the bourbon belt.” Later, her conservative Christian parents refused to give the relationship their blessing, because they didn’t believe in cohabitating before marriage.

Later, after Kacie was sent home in the limo ride of shame, she appealed to Ben.  She made her way back to him, to explain that she was her own person, that she wasn’t necessarily limited by her parents’ old fashioned faith

Which brings us to…

4.     Faith isn’t a big deal on The Bachelor because it’s not a big deal in our own lives.

Jason said that his Jewish heritage didn’t affect his romantic decisions.  Jake, as much as he talked the talk, chose the worst available option, the bed-hopping Vienna who had already been married once and engaged twice before Jake proposed. So far Emily seems to be holding to her values, but her remaining suitors?

She certainly has some interesting choices:

Arie Luyendyk, a racecar driver originally from the Netherlands, does not reveal any religious tendencies.  He lived with a woman and was a temporary father to her children before a bad break up.  Instead of being bothered by this revelation, Emily says this is a good sign, because – get this — it shows he’s ready for a family.

Sean Lowe, a blonde fitness model, seems to be the real deal.  He peppers his language with evangelical catchphrases, and made it clear to Emily’s friends that he shared her Christian beliefs.  His bio indicates he was a member of the Fellowship of Christian athletes and a member of his church’s youth group.   Emily obviously has a connection with him, as he’s one of the last three standing.

Jef Holm has been described as a “half Mormon.”  Though he says he’s not “practicing right now,” he attends services regularly and says he was raised with traditional Mormon values. Some Latter Day Saint Bachelor fans claim this is like being “half pregnant” (not possible), but speculate that he’s not living up to the tenets of the church in which he was raised. If Emily is an evangelical, does this mean that she might have a relationship crisis much like non-religious Ashley and the Jewish J.P. Rosenbaum faced?  (After casually admitting during the show that they came “from different backgrounds,” Ashley began the year long process of converting to Judaism.)

It’s too much to say that the Bachelor and Bachelorette are mirrors of the moral choices are own sons and daughters are making, but in many respects it’s not too far off.

Where does that leave me?  Terrified, slightly hopeful, and glued to my television every single week.

Jef from The Bachelorette: “I’m Not a Practicing Mormon”

The Mormon Bachelor: a Religion-Specific Spin-Off

Is Jef Holm Shy?  Why Appear on The Bachelorette?

July 3, 2012 Book Giveaway: Home and Away on Fox and Friends
Recent Comments
0 | Leave a Comment
Browse Our Archives
get the latest from
Politics Red
Sign up for our newsletter
POPULAR AT PATHEOS Politics Red
1