This post is part of a blog challenge series, 30 Days of Devotion to Hekate.  Day 23 and we are looking at how Hekate has helped me and when She has refused to help me.

I find this one a little difficult, because to be honest I don’t really ask for much help from Her or the other Gods.  But there is one time that answers both questions.  Which might seem odd, but bear with me.

It was last year, I began the year by falling pregnant, discovering I was pregnant and then having my pet rat die and my cat go missing never to return.  Then in May my father died, unexpectedly.  I spent the next week, looking after my kids, tired and aching, helping my mum clean out my dad’s house and support her with funeral arrangements and all the other tiresome stuff that you have to do when someone dies.  In that same time period, my fridge broke down and I then discovered I had gestational diabetes – which for a perpetually starving but morning sickness prone pregnant woman is hell on earth.

This sort of thing continued on for the entire year.  Thankfully no more people I loved died, but pets dying – yes.  Multiple, expensive appliances and necessities dying – yes.  The oven and mower among other things.

I had two good moments that year to offset the bad (and of course good small moments count too) the day I found out I was pregnant in January, and then when my daughter was born in September.  Even if the whole labour thing went completely awry.

So basically all of last year, except my daughters existence, was an awful year.

As an outgrowth of everything that happened I drifted away from all of my religious practices and thoughts and self.  I didn’t go atheist or anything, I just couldn’t be religious for the year.  I had so much to do and deal with, so much running through my head, so much hurting me – I couldn’t dedicate any part of myself to the Gods.

Which is odd, one might think that this would be the perfect time to turn towards the Gods, for strength and love and comfort.  But not me, it’s a time when I, not turned away, but closed myself off.

And She let me.  She never once pushed me to do anything.

The thing about Hekate is She usually does push, gently and subtly for the most part, but She pushes.  She pushes you to continue, to do things, to move and make decisions and grow.  But She didn’t do this for me last year.  She didn’t push me to feel better, to move on, to accept or change what was happening (even if I could have).  She backed off and left me alone – though I could still feel Her there, waiting in the shadows.

So, in this way She both refused to help me, but She also helped me at the same time.  She refused to do anything for me.  But in so doing, She did exactly what needed to be done.  Left me to myself to deal with everything, because that is what I needed to do, it was the only way I could have got through it.

Until this year, all of a sudden, when She decided enough was enough and it was time for me to start working again – and not just like before, but more than ever.  And things changed, drastically.  Not so much my life, though that is changing too – but my religious life and devotion has taken a drastic turn, for the better.

8 – Variations on this deity (aspects, regional forms, etc.)
9 – Common mistakes and worst misconceptions about this deity
10 – Offerings – historical and UPG
11 – Festivals, days, and times sacred to this deity
12 – Places associated with this deity and their worship
13 – What modern cultural issues are closest to this deity’s heart?
14 – Has worship of this deity changed in modern times?
15 – Any mundane practices that are associated with this deity?
16 – How do you think this deity represents the values of their pantheon and cultural origins?
17 – How does this deity relate to other gods and other pantheons?
18 – What quality or qualities of this god do you most admire? And find the most troubling?
19 – Art and music that reminds you of this deity
20 – A quote, a poem, or piece of writing that you think this deity resonates strongly with
21 – Your own composition – a piece of writing about or for this deity
22 – A time when this deity has helped you, and refused to help
23 – How has your relationship with this deity changed over time?
24 – Something you wish you knew about this deity but don’t currently
25 – Any interesting or unusual UPG to share?
26 – Bonus: Hekate in popular culture – TV, movies, plays, fiction books
27 – Bonus: Hymns to Hekate
28 – Bonus: Beginners Ritual Outline
29 – Any suggestions for others just starting to learn about this deity?
30 – Bonus: Resources and Sources about Hekate 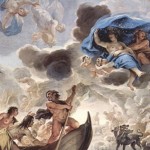 August 23, 2016 30 Days of Hekate: 23 - Changes to Relationship with Hekate
Browse Our Archives
get the latest from
Pagan
Sign up for our newsletter
POPULAR AT PATHEOS Pagan
1

Death and the Solitary Hallows
This Hallows I urge you to contemplate knowledge that can only be...
view all Pagan blogs
Copyright 2008-2020, Patheos. All rights reserved.