30 Days of Hekate: 23 – Changes to Relationship with Hekate

This post is part of a blog challenge series, 30 Days of Devotion to Hekate.  Day 23 and we’re looking at how my relationship with Hekate has changed over time.

I think the relationship I have with Hekate has certainly changed a lot over time.  From the beginning, as I spoke of in my second post in this series, She was simply there without me being aware of it.  I only realised after learning about Her in a book and paying more attention to things, that She was there with me, influencing me at times.

So obviously the relationship was one sided at first.  Then it became a relationship of me striving to inform and educate myself on Her and the other Gods, and in things like witchcraft.

As a teenager the relationship was mostly based on Witchcraft and my obsession with darkness, morbid things and death.  I am a creepy person, what can I say?  Despite me being aware of Her other aspects, I was in the phase of focussing on Her darker aspects and Witchcraft.  She helped me a lot with all of that of course.  It wasn’t a bad time at all and I look back on it with fondness – I still have a tub full of all my writings, including poetry, from that time.  It’s been a while since I’ve looked through it all though.

When I became a mother things changed of course.  I am still a creepy gothic person, but  it’s not a major focus any more.  Not to say it isn’t still noticeable with all the skulls and grim reapers and such decorating my house – but I have other things more front and centre now too.

Since having kids, my focus in witchcraft changed from general witchcraft to Hearth witchery and my relationship with Hekate has gone through various stages of ebb and flow.  Sometimes She is very present in my life, demanding attention but other times She is like a shadow, barely there, hardly felt.  Still there, but distant.

I spoke of the most recent, and perhaps most noticeable time She has been shadowy and distant in my post on times She has helped and refused to help me.  That happened last year up until this year, when pretty much day one of this year I felt something akin to a full body slap.  She very clearly made me aware that enough was enough and it was time for me to get back into everything and focus on Her, and the other Gods, again and more than ever before.

And here I am, back at the start it seems, studying and learning about Her and the other Gods all over again.  But in a new way, since I already know what I first learned – well, I have forgotten some things, but mostly I know what I learned before.  Now I am learning more about Hellenism itself, the religion rather than only the mythology and parts of history. I have also rededicated myself to Her via becoming a Devotee of the Covenant of Hekate. My practice has become much deeper, expanded and I think it has made me even closer to Hekate.

I sense there are still more changes to come in all of this, this isn’t all She requires of me yet.  I guess I’ll find out later.

7 – Names and epithets
8 – Variations on this deity (aspects, regional forms, etc.)
9 – Common mistakes and worst misconceptions about this deity
10 – Offerings – historical and UPG
11 – Festivals, days, and times sacred to this deity
12 – Places associated with this deity and their worship
13 – What modern cultural issues are closest to this deity’s heart?
14 – Has worship of this deity changed in modern times?
15 – Any mundane practices that are associated with this deity?
16 – How do you think this deity represents the values of their pantheon and cultural origins?
17 – How does this deity relate to other gods and other pantheons?
18 – What quality or qualities of this god do you most admire? And find the most troubling?
19 – Art and music that reminds you of this deity
20 – A quote, a poem, or piece of writing that you think this deity resonates strongly with
21 – Your own composition – a piece of writing about or for this deity
22 – A time when this deity has helped you, and refused to help
23 – How has your relationship with this deity changed over time?
24 – Something you wish you knew about this deity but don’t currently
25 – Any interesting or unusual UPG to share?
26 – Bonus: Hekate in popular culture – TV, movies, plays, fiction books
27 – Bonus: Hymns to Hekate
28 – Bonus: Beginners Ritual Outline
29 – Any suggestions for others just starting to learn about this deity?
30 – Bonus: Resources and Sources about Hekate
Previous Post 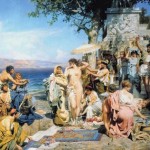 Witchcraft Before Wicca: Three Important Magickal...
Raise the Horns
Related posts from Hearth Witch Down Under

The Corner Crone: Are You Thor, the God...
There was a time when I felt I wasn’t witchy enough because...
view all Pagan blogs
Copyright 2008-2017, Patheos. All rights reserved.