The Cake of ‘Sinful Autonomy’ that Voddie Baucham Eats Anyway

While these influences explain the QF proponent’s vantage concerning their view of social justice, by vaguely defining the thought-stopping terms of ‘Biblical’ and ‘Marxist,’ it falsely bifurcates all civil liberties into two juxtaposed, mutually-exclusive, antagonistic categories. This general error of language-dependent fallacy termed as Vagueness results in a Black-or-White Fallacy. This linguistic, logical Boobytrap causes the unsuspecting person to fall into fallacious reasoning. This final link in the chain of argument which proceeds from a Disjunctive Syllogism eliminates other cogent alternatives and terminates in what seems like a logical conclusion.

Voddie Baucham uses a Gish Gallop of Syllogistic Errors with Non Causa Pro Causa derived assumptions to strengthen his arguments that all things are expressly pro- or anti- Biblical. Consider the example of human agency and how it affects the attitude that many Calvinists have about the Enlightenment Era.

I think of the Protestant Reformation as the crucible of much good which influenced the Western World in many positive ways that were not merely religious. The Enlightenment that followed became the outworking of the principles learned in the Reformation that fostered equality, social justice, literacy, and participatory government. (Liberty begets liberty.) The Reformation as the soil in which the Enlightenment grew brought forth the gift of the American Experiment. Her people decreed and established a haven of freedom for all, granting stewardship of it to her autonomous citizens. 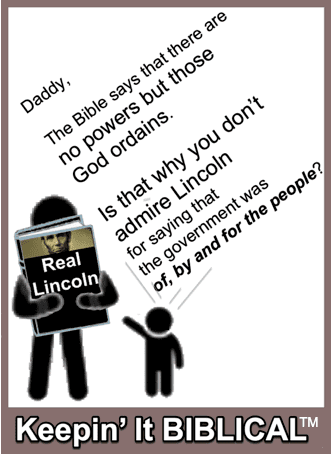 In contrast, some Calvinists reckon the Enlightenment as a monolithic era of man’s arrogance. From the literalist’s perspective, self-governance became a rebellious shaking of one’s fist at God to instead join ‘We the People‘ who achieve goodness without Him. Grasping autonomy somehow robs God of His Own; human rights become new idolatry. These Calvinists claim to only find true freedom through submission to those institutions that they claim mirror God’s authority over them as described in the Bible. (No representative government or democratic process existed then, so the Bible offers no specific guidance about how to live as both Christian and American.) I’m troubled that if civil liberty in the US derives from such a sinful, human system of autonomy, how is it that these same ideologues have no issues with their utilitarianism when exercising their civil rights? Don’t they conveniently consume what they condemn?

Baucham traces social justice to Liberation Theology which he catastrophizes as a child of his ‘Cultural Marxism.’ This master ‘wonderword‘ – a pejorative from an already Poisoned Well – becomes a convenient receptacle for so much blame. Or is it a game of ‘pin the tail’ on the scapegoat? So much seems to tumble down a Slippery Slope – right into the lap of the devil.

I look forward to defending some alternatives in a future post.

Hard to tell if I recorded this 30 years or 10 minutes ago… pic.twitter.com/GPDURhYIJL

June 25, 2020
The unHoly Marriage of Trump and Evangelicals in the Time of Black Lives Matter
Next Post