I’ll be back tomorrow with the further adventures of a robot humping and murdering Ace in Doug Wilson’s book “Ride Sally Ride”. It’s too bad not to share. But today I want to talk more about president Trump’s hospitalization and a curious lack of any chatter about it in the Evangelical Quiverfull world.

Yesterday, as I am sure many of you did, every few hours I’d checked media sources to see who else in the Trump administation had tested positive for SARS Cov 2, Coronavirus. Chris Christie, Kellyann Conway, a laundry list of those the president surrounds himself with have popped positives.

That wasn’t even the most startling news about Trump’s bout of Coronavirus happening. Various doctors giving various contradictory statements with coded language. Mark Meadows, Trump’s Chief of Staff told a very different story than what the doctors stated, saying that the condition is much more serious than reported by the doctors.

His main doctor, Dr. Sean Conley is an osteopath, not a regular M.D., so I’m not entirely sure how reliable of a source or doctor he is. Conley seemed to be dodging many real questions on the health of Trump. So who really knows what his actual medical state is at this point.

I don’t think it is an abundance of caution that they gave him an untested DNA recombiant biologic being called “Regeneron” after the company that makes it along with an antiviral used against Ebola. I don’t know much, but I have had many years on a biologic, and for them to give him a largely untested one speaks to the seriousness of his condition.

Biologics are usually the drug of last choice for many immunio disorders, no matter what those pretty television ads for Skyrizy and the like tell you. Expensive, with a long laundry list of possibly bad outcomes. They’ve gotten better in the last twenty years, but it still comes with risks. The one I was on the longest, Xolair, is now black boxed by the FDA for a larger number than usual of patients dropping dead on it. It worked for me for eight years until one day it just stopped. That they are going there so quickly with Trump says nothing positive. These meds carry increased stroke risks and heart problems.

Trump even spoke on video from his suite at Walter Reed Medical Facility in an attempt to calm the nerves of our nation and others. There have been some rumblings that the Chinese are worried, and the stock market tanked hard on Friday after the news was released.

So, you would think that the twitter feeds, Facebook pages and websites of the Quiverfull cultural enforcers that push and promote him, crow about him from the rooftops being ‘God’s choice’ would say something. Even something simple like, “Please pray for President Trump.” Nothing, utter silence, which puzzles me considering these are people that will chew the scenery at the drop of a hat and make the dramatic all the more dramatic. Silence. What’s up with that?

I hope Trump does not die from this because it would really throw this world into major turmoil. It would throw the election into even more confusion. But it would be nice if we finally had a White House that didn’t lie, that we could trust the statements of instead of this funk of falsehoods and contradictory statements. It’s even come out now that Trump was tubed up for oxygen, hiding it behind his mask on Friday. That he had symptoms before the debate on Tuesdays, and tromped around for two days after a positive test doing campaign rallies and other events chockablock with unmasked people. A one man super spreader.

The only good I can see is the huge load of funny memes being sent about, particularly some of the “Game of Thrones” and Ruth Bader Ginsburg mashups. 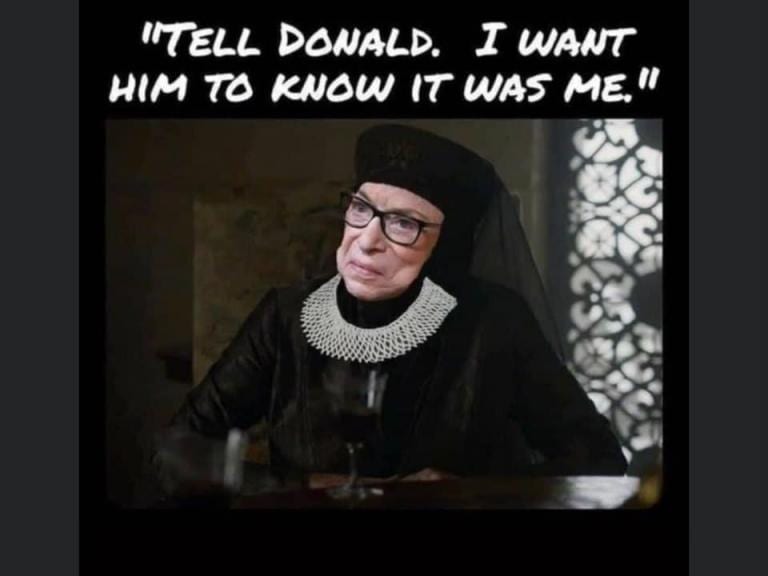 October 5, 2020 Ride Sally Ride Chapter 2 - Here Come the Gay Lawyers
Recent Comments
0 | Leave a Comment
"This is late, partly bc of my preoccupation and partly bc I'd been slowly reading ..."
Jennifer Serena’s Serenity – Luxury Hotel, Birthing ..."
"Thank you for your commitment to truth and love, Suzanne. Best wishes to you and ..."
Meredith Anne Not a Goodbye, More of a ..."
"For what it's worth, I've learned a lot from you about a Very Creepy movement ..."
Gwen Pryce Not a Goodbye, More of a ..."
"Unfortunately, this kind of satire (if it even is satire) is what gives Christianity the ..."
Emily Is Biblical Gender Roles a Big ..."
Browse Our Archives
Related posts from No Longer Quivering