Father Pavone’s action was so ridiculous, Snopes.com was asked to verify it. Have they stored Baby Choice for years? We believe so.

Note – see our recent coverage on this matter starting with the most recent post:

– In qualified apology, Father Pavone asks us to reach out – we did and didn’t hear back… – Oh, and the videos are still up. Update: the first video and apology have been removed! (Click here for more.)
– Breaking: Fr. Frank Pavone defends sacrilege: “The issue is not how I’m treating a baby.”

– Adoring Trump: Fr. Frank Pavone uploads second video with body used as prop
– Did Father Frank use a dead body or a crafty image of one? Priests for Life responds.
– “Father Frank, Live!” on Facebook: Using the Dead to Elect Trump? Going too far? (Disturbing images; Update on body, Priests for Life.)

As we wait to learn more about Father Pavone’s Baby on Altar for Trump show – in the few moments before our first polls close in the country – we should recall how ridiculous Father Pavone’s deed was and how embarrassing it is for pro-lifers of all walks of life.

You may have heard of Snopes.com – you submit a rumor and one of their investigators fact-checks it.

Sometimes the rumor is based off of a wild meme or something preposterous you’ll hear on the news or read online.

How did the pro-life cause make it onto Snopes this week? Father Frank Pavone.

This Catholic priest, national director of Priests for Life, and with faculties in the Roman Catholic Diocese of Amarillo in Texas brought the pro-life movement to Snopes after commodifying the body of a child on an altar in a sacrifice to Donald Trump.

Note – see our previous posts on this matter starting with the most recent:

– In qualified apology, Father Pavone asks us to reach out – we did and didn’t hear back… – Oh, and the videos are still up.
– Breaking: Fr. Frank Pavone defends sacrilege: “The issue is not how I’m treating a baby.”
– Adoring Trump: Fr. Frank Pavone uploads second video with body used as prop
– Did Father Frank use a dead body or a crafty image of one? Priests for Life responds.
– “Father Frank, Live!” on Facebook: Using the Dead to Elect Trump? Going too far? (Disturbing images; Update on body, Priests for Life.)

Read what Snopes has uncovered on where this baby came from:

ORIGIN:On 6 November 2016, a Catholic priest posted a live Facebook video in which he placed (what was said to be) an aborted fetus upon an altar, urging fellow Catholics to vote against Democrats and legal abortion.

A spokeswoman for the Catholic clergy activist group, Priests for Life, confirmed that the fetus was real and was given to the organization by a pathologist under a strict agreement on confidentiality, although she was able to tell us that it was aborted in the second trimester of pregnancy. The group has dubbed the fetus “Baby Choice.”

In the video, Fr. Pavone has the fetus on an altar, which the spokeswoman said is located in a room that is sometimes used for Mass at the organization’s headquarters in Staten Island, New York. The Priests for Life group originally performed a funeral service for the body, which is preserved in formalin and normally kept in a memorial chapel.

Father Pavone (Priests for Life): Did you tell Snopes that the baby’s body used in the video was known as “Baby Choice”?

I’ve been waiting to learn from you the answers to the questions I emailed your organization. Considering the possibility that this is Baby Choice, as you call the child’s body, please tell us more about the child’s body’s origin.

Also, do you name every child “Baby Choice” – isn’t each child unique? – or do you simply have this child and one from 2012 named Baby Choice? Or is there only one Baby Choice that you’ve kept – kept from burial – over the years?

Please tell us this child – nor any child every entrusted to or received by Priests for Life – has either been stored for political use and show, deprived of burial, or disinterred.

Protestors said “Baby Choice” was a victim of a second-trimester saline abortion, in which a salt solution is injected into the mother’s womb to slowly poison the fetus. The body of the intact Caucasian fetus, at 20-22 weeks’ gestation, was covered with black spots where the salt solution burned off the top layer of her skin.

The only information that Father Pavone disclosed about the baby, dubbed “Baby Choice,” was that he had acquired her from outside North Carolina and brought her to town so that her funeral could coincide with the demonstration.

Baby Choice” has been the name given to various fetal remains obtained and displayed by anti-abortion groups including Americans Against Abortion, Operation Rescue/Operation Save America and Priests for Life over the past three decades.

The first “Baby Choice” appeared in 1985, and is similar to the baby memorialized in Charlotte last week: a girl at the same gestational age, who died from the same abortion procedure, featuring similar black burn marks on the skin.

Father Pavone said the baby in Charlotte was not the original 1985 “Baby Choice.”

However, two Operation Rescue/ Operation Save America members described the baby as not being recently deceased, saying they have used her in similar demonstrations elsewhere.

Organizers insisted that they treat the baby’s remains with dignity and respect as part of their fight to end abortion.

Dr. Patricia McEwen – whom the Priests for Life office referred inquires [sic] to about “Baby Choice” and now serves with Operation Save America, Life Coalition International and Doctors for Life International – said she first met “Baby Choice” in 1991, and that the baby regularly travels around the country in anti-abortion demonstrations. The baby is the victim of “a very old saline abortion,” McEwen said, and is kept in formaldehyde when not being used in demonstrations.

“We’ve gotten attached to this little one. She’s the evidence of our sins, of our crimes against the little ones,” said evangelist Rusty Lee Thomas of Operation Rescue/Operation Save America, who said he once carried “Baby Choice” on a six- month walk across in America in 2004.

“It’s not like we want to exploit her or anything like that. Even though ‘Baby Choice’ is dead, she still speaks. We need to weep and mourn and grieve, and ‘Baby Choice’ helps in that process,” Thomas said.

Church regulations issued by the Vatican’s Congregation for the Doctrine of the Faith in 1987, signed by then-Cardinal Joseph Ratzinger (now Pope Benedict XVI), state that fetal remains – whether fully developed or not, whether aborted or not – “must be respected just as the remains of other human beings.” That includes timely and reverent burial or cremation, and forbids any “commercial trafficking.” “Furthermore, the moral requirements must be safeguarded that there be no complicity in deliberate abortion and that the risk of scandal be avoided.”

(The paragraph from the CDF document cited reads in full: “The corpses of human embryos and foetuses, whether they have been deliberately aborted or not, must be respected just as the remains of other human beings. In particular, they cannot be subjected to mutilation or to autopsies if their death has not yet been verified and without the consent of the parents or of the mother. Furthermore, the moral requirements must be safeguarded that there be no complicity in deliberate abortion and that the risk of scandal be avoided. Also, in the case of dead foetuses, as for the corpses of adult persons, all commercial trafficking must be considered illicit and should be prohibited.”)

Father Frank Pavone, this is amazing: do we have a sort of trafficking of human remains, exploiting a child’s body and denying burial for political purposes while desecrating an altar? Whether or not there are several babies named “Baby Choice”, Snopes and the Catholic Herald both note that Priests for Life stores (either denying burial or having disinterred) children’s bodies in formaldehyde for decades at a time. That’s a harsh bill of (not-)goods.

As we have stated, we have received no reply from Priests for Life in response to our request for information on these matters.

Besides the sacrilege, Father Pavone, let’s at least clarify whether or not children’s bodies are ever stored, denied burial beyond a customary amount of time, or disinterred.

Let’s just start there, Father – your sacrilege, commodification of human bodies, disobedience to your Bishop, and foolish political preference are a separate conversation.

It should also be noted that Father Pavone responded to a request for comment from a media organization outside of the USA, the Daily Mail. This afternoon, the Daily Mail published an exclusive email explanation from Father Pavone on the origins of the bodies they receive. Check it out, here. The body was received, entrusted to Priests for Life for burial – but not so fast, dignified creature’s remains: first, you must be used as a tool for his political agenda! 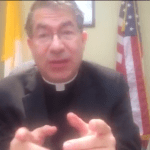 November 8, 2016
In qualified apology, Father Pavone asks us to reach out – we did and didn’t hear back… – Oh, and the videos are still up. Update: the first video and apology have been removed!
Next Post