Update – 7 November, 2016 at 14:28 pacific time: Priests for Life has responded to our request for comment. Click here for more.

Update – 7 November, 2016 at 16:02 pacific time: A second video with the body of a child used as a prop has been uploaded by Father Frank Pavone onto Youtube. Click here for more.

Update – 8 November, 2016 at 15:23 pacific time: Father Pavone’s action was so ridiculous, Snopes.com was asked to verify it. Have they stored Baby Choice for years? We believe so.

Update – 9 November, 2016 at 12:00 pacific time: Fr. Frank Pavone: Thank me, for “today is a great day for America and the Church”; Rebukes Bishop. (Statement by Priests for Life) Click here for more.

Father Frank Pavone does not come off as shy.

Yesterday, 6 November, the Priests for Life National Director went live on Facebook to preach and advertise for his show, “Father Frank, Live!”

Some have speculated as to whether Pavone had an image of the child’s body or the actual child’s body on the altar. (Update – 7 November, 2016 at 14:28 pacific time: Priests for Life has responded to our request for comment. Click here for more.)

Father Frank Pavone has been critical of Hillary Clinton and has encouraged Catholics to vote for Donald Trump tomorrow. Some have questioned his use of Priests for Life’s resources as potentially using a non-profit to help elect a candidate for office.

Concerning the video, our brother, Mark Shea, has expressed the need for a new pro-life movement here.

The nature of heresy is not that it tells a falsehood. It’s that it tells a real truth of the faith and blows it up into a swollen and inflamed thing that blocks out the rest of the Church’s teaching.

That’s why heresy is so hard to fight. It’s a truth, for instance, that God the Father is majestic and glorious and the ruler of all creation. So when the Church tries to get Arius to quiet down, he can always say, “What is *wrong* with saying God the Father is greater than the Son? Jesus himself says “The Father is greater than I!” The heretic can always point to something in the Church’s tradition that backs him up and accuse the critic of rejecting the Church’s teaching.

So: the Church does indeed insist on the right to life of the unborn baby.

BUT. That does not mean that in the name of fighting abortion, you get to use the unborn’s naked body as a prop for attacking your culture war enemies on the eve of an election. It does not make the unborn’s body a *thing* for you to manipulate as political imagery. Funerals are, above all, about the dignity of the deceased.

Ed Mechmann, director of public policy for the Archdiocese of New York, slammed Fr. Frank Pavone in a blog post entitled, “A Political Desecration” on Monday afternoon. He wrote,

Yesterday, Fr. Frank Pavone, the leader of Priests for Life, went live on Facebook to endorse Donald Trump for President. That’s his right as a U.S. citizen, and one can agree or disagree with that as a matter of course. But the way he did it was absolutely appalling, and deserves to be repudiated by all of us who consider ourselves to be pro-life in the fullest meaning of that word.

What did he do? He used a dead aborted baby, laying naked and bloody on an altar, as a prop for his video.

Yes, you read that correctly.

The video is below. Is it taking things too far? Is Father Frank wrong? Is this the image we want people to think of – one of fear, death, and hatred – in the year of Mercy? Does Father Frank speak for you?

If anything, watch the last minute of the video. Some may find the transition from ritual to a quick promotion of “Father Frank, Live!” incredibly disturbing, disrespectful, and as contributing to the commodification of human life.

What would the USCCB’s Secretariat of Pro-Life Activities say about this?

We reached out to Deidre McQuade, Assistant Director for Pro-Life Communications for the United States Conference of Catholic Bishops, for comment via phone and e-mail on Father Pavone’s Facebook Live video and have not heard back. We will update you with any comment we might receive.

Additionally, we reached out to the Roman Catholic Diocese of Amarillo, Texas, in search of comment from the Diocese where Father Frank has faculties – even though he is not physically located within the Diocese. We do know that the Diocese has been made aware of the video, and will wait to hear for an official comment.

Seeing as Father Frank Pavone is a member of the Pontifical Academy for Life, we reached to the Academy for comment on Monday afternoon. We will update our story if we receive one.

Other priests in recent months have used strong language to dissuade Catholics from voting for Democrats, such as Phoenix’s Father John Lankeit and Father Mark Goring of the Companions of the Cross.

We are waiting to learn whether Father Frank will be asked to remove the video – or will remove it as a result of the backlash. On the other hand, several viewers expressed their support of Father Frank’s message in comments during the Livefeed.

One thing worth noting is that even though Father Frank has posted new content since going live for the video in question, he has “pinned” it to the top of his Facebook Page, making it easier to access and view. 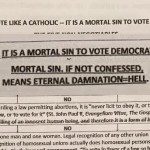