St Patrick’s Day Parade: What Would Jesus Do?

Some Catholics are up in arms over Cardinal Dolan agreeing to be the Grand Marshall of the St Patrick’s Day Parade in New York which has been infiltrated by homosexual activists.

Elizabeth Scalia has stirred the pot with this post comparing Dolan to Jesus who ate with sinners, did not condemn the woman taken in adultery, rebuked Pharisees and told the story of the prodigal son. Her post is written in her gentle and probing style,  but it has attracted the ire of those who disagree and think Cardinal Dolan should have rained on that parade instead of reigning at that parade.

Yes, yes, Jesus dined with sinners and did not condemn them. He accepted and forgave everyone who repented.

However, the sinners Jesus dined with knew they were sinners. The prodigal son and Matthew the tax collector and the woman taken in adultery and the woman who washed and anointed his feet…they were not only sinners, but penitent sinners.

What we have in the case of gay pride is just that: Pride. It is inyerface homosexuality. It is parading itself publicly on purpose and without repentance.

Here is a lifestyle and moral choices that the church says “cries out to heaven for justice.” These sins demand condemnation and rebuke. Can we be silent in the face of sins that cry out to heaven for justice? We accept everyone. We dine with sinners, but what do we do with those who protest, “This is not a sin and I am not a sinner?” Have we forgotten that  people who have made rotten moral choices can also be self righteous and proud? It’s not only the “Pharisees” who are blind to their sin.

How do we deal with this.  If we don’t condemn do we not condone?

It’s a tough one. We want to adopt that kindly cliche, “Love the sinner, hate the sin.” But homosexual activists say, “You can’t separate my actions from who I am. If you say you accept me, you must accept who I love and how I love them. I am homosexual. You can’t accept me and reject that part of me.” Don’t that have a point? After all, at the final judgement it will not be the sin that is condemned to hell, but the sinner, and do we not make that same judgement here on earth? We sentence the murderer to life in prison for the murder he committed. Hate the sin, love the sinner? How does that work exactly? Isn’t it just a theory?

On the other hand, must we all turn into Westboro Catholics? Do we really want to carry placards saying “God Hates Fags” and “Fags Eat Sh*t”? I don’t think so.

So what should Cardinal Dolan do?

What would Jesus do? Continue Reading 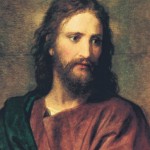 September 10, 2014 How to Use the Lord's Prayer as a Spiritual Weapon
Browse Our Archives
get the latest from
Catholic
Sign up for our newsletter
POPULAR AT PATHEOS Catholic
1

Spooky Tales for Catholics: An America Magazine Roundup
strongly endorse Dracula although I wonder if the note about his likely...
view all Catholic blogs
Copyright 2008-2020, Patheos. All rights reserved.