The Gospel and the Script Doctor

Aristion was a prestigious and influential figure in the early church, about whom we know very little. But what we do know has some far-reaching implications for early attitudes to the making of the gospels, and the authority of scripture.

Most of what we know about Aristion comes from the early/mid second century writer Papias of Hierapolis, whose work survives only in small fragments. Hierapolis was a critical center of the peimitive church, located in what is now south western Turkey, close to Colossae and Laodicea, which are both mentioned in the New Testament. Papias recorded traditions about the apostles, and also of the next generation, such figures as “Aristion, and the presbyter John.” Papias himself was apparently a pupil or disciple of both men. As Eusebius noted two centuries later,

At least he mentions them frequently by name, and gives their traditions in his writings … Papias gives also in his own work other accounts of the words of the Lord on the authority of Aristion who was mentioned above, and traditions as handed down by the presbyter John; to which we refer those who are fond of learning.

Given the context, it is reasonable to locate Aristion in Asia Minor, probably in Ephesus. Among other things, Papias’s words about the various Johns are a vital source for everything we think we know about the Johannine tradition. It is a reasonable speculation that Aristion was close to the person or people who wrote the final version of the Gospel of John, even if he was not directly involved in it himself. That point may be significant, and I’ll return to it shortly.

At the end of the nineteenth century, scholarship seemed to throw new light on Aristion’s life and career. Scholar F. C. Conybeare reported finding an Armenian gospel (codex Matenadaran 2374) with some intriguing readings and annotations. The most celebrated involved the Longer Ending of Mark’s gospel. 16.9-20, a conclusion that does not feature in the best early manuscripts. As it stands, Mark ends in mid-air, so to speak, but any questions about the author’s original intent are neatly resolved by the later addition, which ties up narrative ends by providing a “real” Resurrection appearance. That is the conclusion we know in the King James Bible. Even if this Longer Ending does not date from Mark’s time, it is certainly an early text: during the mid-late second century, Irenaeus refers to it, as does Tatian’s famous gospel harmony, the Diatessaron. The Armenian codex found by Conybeare includes this Longer Ending, but with a note or gloss attributing it to Ariston Eritzou – probably, to “Aristion the Elder,” or “the Presbyter,” and also, likely but not certainly, to the man we know from Papias,

Over the past century, scholars have argued about this gloss. Some deny its validity, noting the lack of any earlier textual tradition, and a nine hundred year gap is not easy to span. Yet the codex must be copying from some earlier text, of wholly unknown date. Conybeare argued for a fifth century original.

Other suggest other possible Aristions, given that the name was not uncommon in the early centuries. But many take Conybeare’s claim seriously. In his favor, we can imagine a medieval scholar recognizing that the Longer Ending was indeed a later addition, but why on earth would he think to credit it to that particular person, rather than to someone famous, some early pope or patriarch, or a martyr like Ignatius or Polycarp? Why Aristion, unless there was indeed a tradition linking it to him?

Offering some support to the Aristion link, the Longer Ending has definite Johannine echoes. It stresses the key role of Mary Magdalene as a Resurrection witness, and moreover has Jesus appear to the eleven surviving apostles as they sat at a meal. Having said that, it also makes reference to something like the journey to Emmaus, which presently survives only in Luke – although the Longer Ending account has a different outcome than Luke’s.

For the sake of argument, assume that this late first century Aristion reported by Papias was the one referred to, and further assume – more boldly – that the claim about his authorship was true. Certainly, somebody sat down and wrote that Longer Ending, and they must have written in somewhere in the years between (say) 90 and 140. Let’s say it was our Aristion – while acknowledging that this can never be known for certain.

But think that through in terms of the dynamic. Imagine an early Christian community probably around 100, which owns this precious text that is very probably associated with Peter himself. Papias in fact is the best evidence for Mark being the follower and interpreter of Peter, making his gospel an invaluable apostolic legacy. Yet as it stands, the gospel’s ending would have made it close to worthless for an early congregation. Or at least, the particular copy that this community owned had lost its original ending, breaking the story in mid-tale. So what to do? Should they just toss the thing?

Or could they bring in a – what would we call this? A repair person? A manuscript fixer upper? If only our language had a convenient name for such a figure. Actually, it does.

Modern Hollywood would recognize the situation instantly, and would know the solution. Faced with an unworkable text, they would bring in a script doctor, one of the most valued and under-appreciated of Hollywood professions. Carrie Fisher was one legendary and highly prized example of the breed, who contributed far more to film-making in that capacity than she ever did as Princess Leia.

But to return to the Mark Crisis at the end 0f the first century. That particular script doctor – call him Aristion? – had no hesitation about adding to the manuscript in order to make it serviceable, to give it a real ending. I rather doubt if anyone said “But this is sacred text and every word is divinely inspired! How dare I add my own unworthy thoughts to this work?” Nor did they follow later concerns about the integrity of authorship, that every word had to be attributed to one literary master craftsman. Apparently, nobody objected to creating a document with words attributed directly to Jesus himself – although it is just possible that the passage in question (16.15-18) had previously circulated separately in his name. Do remember that Aristion claimed to know and transmit many “words of the Lord.”

The doctoring was evidently needed, and it was done. The church needed it, and that trumped other considerations.

The fact of such a large addition also suggests how ready those congregations would have been to adjusting or editing other stories or readings that had become problematic over time. At least in those early years, gospels were far more open to editing, improving, and rewriting than later ages might think plausible, or proper.

There is a valuable description of the early history of Mark’s Longer Ending in Clayton L. Coombs, A Dual Reception: Eusebius and the Gospel of Mark (Fortress Press, 2016).

October 9, 2019
Evangelicalism Is Not a Political Problem
Next Post 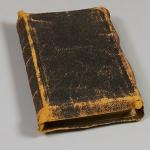 October 14, 2019 The Second Canon
Recent Comments
0 | Leave a Comment
"Informative and interesting. Thank you. This raises questions about the term Protestant Reformation."
the old scribe How the English Reformation was Named: ..."
"Thank you for the insights. As you pointed out, technology has been a two edged ..."
the old scribe Is Religion Naturally Averse to Technology?
"I suppose the question is whether or not the Holy Spirit could use technology to ..."
Nimblewill Is Religion Naturally Averse to Technology?
"What a great post, Allie! Insightful and eloquent."
Ansley Every Day People in Every Day ..."
Browse Our Archives
Related posts from Anxious Bench