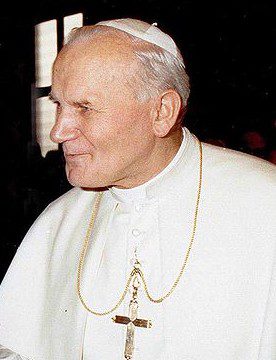 I’m at a loss for words (and many others can say what I would like to express far better than I can), so I’ll be brief. Pope John Paul II was, I believe, the greatest and most influential man of the 20th century. I think he will in due course be canonized, declared “the Great” (like Popes Leo and Gregory), and also a Doctor of the Church. This is not mere “eulogizing exaggeration.” I’ve thought this for a long time.

His impact was incalculable. What I’ll remember most will be his extraordinary teachings and efforts towards greater understanding among all peoples. Everything he wrote about and did and sanctioned has been of immense importance: the Catechism, his encyclicals on the Gospel of Life, the Blessed Virgin Mary, ecumenism, faith and reason, labor, and all the others.

He was instrumental in the downfall of Communism, and has dealt a death-blow against Catholic liberals (though they don’t appear to know it yet, or — far more likely — are too proud to admit it). He reinvigorated the true spirit of the Second Vatican Council, which had been hijacked and almost made a mockery of by the dissidents we are blessed to have in our midst. He instituted crucial liturgical, educational and even architectural reforms and spearheaded exciting, truly progressive (in the right sense of this highly-abused word) teachings such as his emphasis on the theology of the body, and on marriage and women.

His call for a renewed evangelism and re-evangelism has been central to the self-understanding and motivation of apologetic and evangelistic efforts and enterprises like EWTN, Catholic Answers, Envoy, The Coming Home Network, Catholic radio (including my associate John Martignoni, who is now on the radio), Catholic publishing (such as my own publisher, Sophia Institute Press, OSV, and Ignatius) and all of us on the Internet and elsewhere who are trying in our own meager, deeply-flawed ways to share the truth and rationales of Catholic Christianity with the world.

He was my hero and, I think, the greatest man in the world, by any estimate of the word “greatness.” He was Peter Among Us. He exhibited and manifested the Spirit of Jesus like no one I have ever seen in my lifetime (save perhaps Mother Teresa). May he rest in peace, and praise be to God for delivering such a “holy giant” to the Church in our terrible times. He will be a powerful intercessor in heaven. If ever there was hope incarnate in one (living, created) man, that Christianity still can have a significant cultural and evangelistic impact, it resided in John Paul II: the holy man and singular leader of men; shepherd of the world. And the world knew it; that’s the marvelous and wonderful thing about it. The Gospel of Jesus lives, so powerfully! It can and will transform the lives of all who accept it by God’s grace.

I shall list below some articles which document the impact that His Holiness, Pope John Paul II has had on the Catholic Church and the world, and then his own writings:

Petrine Ministry and Communion in the Episcopate (Cardinal Bernardin Gantin)

Splendor of Truth (William Most)

St. John of the Cross and the Hidden God ( [JPII’s dissertation was on St. John] Donald F. Haggerty)

The Crisis of Faith and the Theology of Mission: A Reflection on Redemptoris Missio (Timothy T. O’Donnell)

Declaration on Euthanasia (Sacred Congregation for the Doctrine of the Faith, 5 May 1980)

Redemptoris Mater (Mother of the Redeemer, 1981)

Sollicitudo Rei Socialis (On the Social Teaching of the Church, 1987)

Familiaris Consortio (On the Family, 1981)

Orientale Lumen (The Light of the East [Ecumenism], 1995)

Mulieris Dignitatem (On the Dignity of Women, 1988)

Papal Consecrations to the Immaculate Heart (Pius XII and JPII, 1984)

The Church Must Learn To Cope With Computer Culture (1989)

Television and the Family: Guidelines for Good Viewing (1994)

Cinema: Communicator of Culture and of Values (1995)

Importance of Harmonizing Human Love with Respect for Life (1984)

Faithfulness to the Divine Plan in the Transmission of Life (1984)

The Church’s Position on the Transmission of Life (1984)

A Discipline That Enobles Human Love (1984)

Continence Protects the Dignity of the Conjugal Act (1984)

Continence Frees One From Inner Tension (1984)

The Redemption of the Body and the Sacramentality of Marriage (1984)

Respect for the Work of God (outline of conjugal spirituality, 1984)

Loss of Original Sacrament Restored with Redemption in Marriage-Sacrament (1982)

Tertio millennio adveniente (As the Third Millennium Draws Near, 1999)

I Appeal to World’s Scientific Authorities: Halt the Production of Human Embryos! (1996)

Message to the Pontifical Academy of Science on Evolution (1996)

Seek to be active in life of your local Church (to Catholic Charismatics, 1996)

Wipe out the tragic scandal of hunger (1996)

We entrust, O Mary, and consecrate the whole world to your Immaculate Heart! (1982)

Pacem in Terris: A Permanent Commitment (2003)

To Delegations of Other Christian Churches and Organizations (1978)

On the Centenary of the Birth of Albert Einstein (1979)

Meta Description: Tribute to Pope St. John Paul II and links for much further information about him, and to his writings. 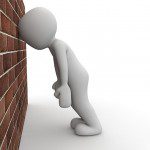 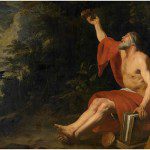 June 8, 2005 "The Prayer of a Righteous Man Availeth Much" (Jas 5:16: KJV)
Recent Comments
0 | Leave a Comment
Browse Our Archives
get the latest from
Biblical Evidence for Catholicism
Sign up for our newsletter
POPULAR AT PATHEOS Catholic
1