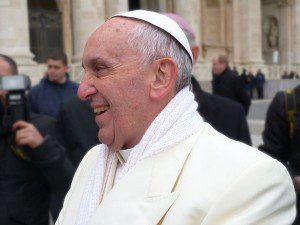 This is the latest complaint of Pope Francis’ endless, relentless (and, I’ve found, usually wrongheaded) critics. It’s the second aspect of the infamous “rabbits” controversy that I wrote about two days ago.

Here are the pope’s related remarks, as recorded in America magazine:

This does not mean that the Christian must make children in series. I rebuked a woman some months ago in a parish who was pregnant eight times, with seven C-sections (cesareans). “But do you want to leave seven orphans? That is to tempt God! (Paul VI) speaks of responsible parenthood.

That example I mentioned shortly before about that woman who was expecting her eighth (child) and already had seven who were born with caesareans. That is an irresponsibility (That woman might say) ‘no but I trust in God’ But God gives you methods to be responsible. Some think that, excuse me if I use that word, that in order to be good Catholics we have to be like rabbits. No. Responsible parenthood!

A woman who is a semi-regular visitor to my Facebook page, wrote in a public post there:

I don’t trust the liberal media and I do try to check original sources. And I love Pope Francis — I really do. But I think the choice of wording was poor and I also think he threw the pregnant lady waiting for her 8th surgical delivery under the bus. I’m sorry Dave but every time I read that I wince. And what is this “tempting God” theology as it relates to being open to new life? I don’t recall ever seeing that in the Theology of the Body, and I’m pretty sure this lady wasn’t trying to test God’s goodness or absolute power! I think Pope Francis needs to find a way to be pastoral in his evangelizing attempts — a way that won’t hurt and sadden the rest of the flock!

It’s being an irresponsible parent, is what. The pope was exactly right. Now people are going after him for attacking this woman, while ignoring his point: that she ignored grave reasons for not conceiving another child, and put her children at risk of losing their mother (as he stated).

Grave reasons for not having further children, or spacing them, is every bit a part of Humanae Vitae as being open to life is. The two are not contradictory.

Where is the evidence that the pregnant woman and her husband ” ignored” grave reasons. Perhaps they factored them in. I’m really surprised at you David — and not in a good way.

This led me to make a lengthy and detailed response:

I don’t see that it is even arguable. First of all, the pope was himself familiar with the woman’s case (having rebuked her in person); therefore he would have known (most likely) more factors than the ones he mentioned in his interview. As usual, he is not being given the benefit of the doubt by his critics. In an article in Vatican Insider it’s stated:

So now the argument (if kept up) would be over whether C-sections entail a greater risk. Yes, they do. Here is what the Wikipedia article on the topic states:

Risks to the mother

In Canada the difference in bad outcome in the mother (e.g. cardiac arrest, wound hematoma, or hysterectomy) was 1.8 additional cases per 100 or three times the risk.[12]

. . . As with all types of abdominal surgeries, a Caesarean section is associated with risks of postoperative adhesions, incisional hernias (which may require surgical correction) and wound infections.[13] If a Caesarean is performed under emergency situations, the risk of the surgery may be increased due to a number of factors. The patient’s stomach may not be empty, increasing the anaesthesia risk.[14] Other risks include severe blood loss (which may require a blood transfusion) and postdural-puncture spinal headaches.[13]

Women who had Caesarean sections were more likely to have problems with later pregnancies, and it is recommended that women who want larger families should not seek an elective Caesarean. The risk of placenta accreta, a potentially life-threatening condition, is 0.13% after two Caesarean sections, but increases to 2.13% after four and then to 6.74% after six or more. Along with this is a similar rise in the risk of emergency hysterectomies at delivery.[15]

Mothers can experience increased incidence of postnatal depression, and can experience significant psychological birth trauma and ongoing birth-related post-traumatic stress disorder after obstetric intervention during the birthing process.[16] Factors like pain in first stage of labor, feelings of powerlessness, intrusive emergency obstetric intervention are important in the development of birth trauma.[16]

Women who have had a Caesarean for any reason are somewhat less likely to become pregnant or give birth again as compared to women who have previously only delivered vaginally.[17]

There were also additional risks to the baby that were described in the article.

Wikipedia also has an entire article entitled: “Delivery after previous Caesarean section” which details a host of risks involved.

[N]oth­ing at all is “bad about a C-section,” . . . the pope was speak­ing of a woman who had already had seven of them and was going out of her way to get preg­nant again. A Face­book friend and fel­low Catholic blog­ger, JoAnna Wahlund, explains why the pope was right to be con­cerned. (This was in a Face­book thread on my own page.)

All preg­nan­cies have the poten­tial to be risky. But seven C-sections dras­ti­cally increases the risk of pla­centa acc­reta, which can cause the uterus to rup­ture (killing both mom and baby). If a woman has had seven C-sections, her uterus is paper thin, and doc­tors tell her, “Another preg­nancy could very well kill you and your child,” then yes, it is risky and irre­spon­si­ble to delib­er­ately seek to achieve preg­nancy in that sit­u­a­tion.

Now, what the pope says, in effect . . ., is not, Don’t have a C-section but, If you’ve had seven of them, maybe going out of your way to get preg­nant again isn’t the best thing. Don’t tempt God. There are licit ways for you to avoid preg­nancy, which you should use. If you do oth­er­wise, you risk that you will die, your baby will die, and your other chil­dren will be left with­out a mother. Respon­si­ble par­ent­hood.

Therefore, the pope’s reasoning is perfectly in accord with medical knowledge (as well as Catholic ethical teaching and thinking on reproduction and childbirth). C-sections entail not insignificant risk; multiple ones entail that much more risk. It is (generally speaking) irresponsible to deliberately have eight c-sections.

For further information about the risks of multiple c-sections, see:

Multiple C-Sections: How Many Is Too Many? (Elizabeth McGee, C-Section Birth & Recovery, March 2009)

Once again, his rebuke was a loving and wise one, and he deserves no scolding or withering criticism for making it.

People want to criticize him, moreover, because he mentioned a real person. He didn’t mention her name. In the Bible, St. Paul mentions actual names of people whom he was rebuking:

2 Timothy 2:16-18 (RSV) Avoid such godless chatter, for it will lead people into more and more ungodliness, [17] and their talk will eat its way like gangrene. Among them are Hymenae’us and Phile’tus, [18] who have swerved from the truth by holding that the resurrection is past already. They are upsetting the faith of some.

2 Timothy 4:14-15 Alexander the coppersmith did me great harm; the Lord will requite him for his deeds. [15] Beware of him yourself, for he strongly opposed our message.

Others, like Simon the Sorcerer (Acts 8:9-24), had their names mentioned in Scripture, to be known for posterity as a bad example. St. Paul wrote at length about a person in the Corinthian church (though not by name this time; just like the pope’s statement) whom he recommended as a recipient of social stigmatization until he repented:

1 Corinthians 5:1-5  It is actually reported that there is immorality among you, and of a kind that is not found even among pagans; for a man is living with his father’s wife. [2] And you are arrogant! Ought you not rather to mourn? Let him who has done this be removed from among you. [3] For though absent in body I am present in spirit, and as if present, I have already pronounced judgment [4] in the name of the Lord Jesus on the man who has done such a thing. When you are assembled, and my spirit is present, with the power of our Lord Jesus, [5] you are to deliver this man to Satan for the destruction of the flesh, that his spirit may be saved in the day of the Lord Jesus.

Later, Paul told them to receive the man back into the fold after he repented (2 Cor 2:6-11). It was intended to help this person and to provide an example of how we should not act (in terms of sin), and how the community should react to the sinner, for the purpose of his repentance and restoration.

Likewise, the pope in rebuking this woman (the first time, in person), was trying to help her to better follow Catholic teaching. And by bringing it up again, he was trying to illustrate by bad example, how women should apply the responsibilities of parenthood, according to the Church. This helps people, too.

The problem is that all this is lost in today’s society. Rebukes are widely regarded as terrible, “judgmental” or “intolerant” things and “personal insults” and we mustn’t ever do that (unless, of course, the pope is the target). The notion of the loving rebuke for pastoral purposes is almost totally lost, even within the Church. This is what happens when people think more like the surrounding culture than according to a Catholic or otherwise Christian worldview. St. Paul also warned us:

Romans 12:2 Do not be conformed to this world but be transformed by the renewal of your mind, that you may prove what is the will of God, what is good and acceptable and perfect.

I don’t see that the pope has done anything wrong here, according to either the Bible or Catholic teaching. On the contrary, he issued a loving (though admittedly very stern) rebuke (in essence, an act of love): the example of which will help other women to avoid the same mistaken perspective. But because of our current cultural mindset, many cannot or will not receive it as such , and realize that it is entirely within a biblical worldview to do such a thing. He acted very much as St. Paul would (judging by the above examples), and Paul urged us to imitate him (1 Cor 4:16; Phil 3:17; 2 Thess 3:7, 9) as he in turn imitated Christ (1 Cor 11:1; 1 Thess 1:6). The Vicar of Christ should certainly imitate Christ and also the great Apostle Paul, who imitated our Lord.

[see also the vigorous discussion on my Facebook page] 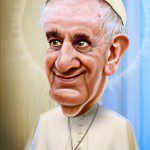 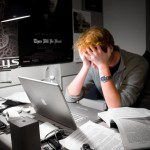