Jesus, in Effect, Used Abortion as a Metaphor for Hell (Gehenna)

Gehenna is a reference to the Valley of Hinnom, which is directly south of Mt. Zion, near the Old City of Jerusalem. When I was in Israel in October 2014, I walked down a good portion of the Kidron Valley (after walking around the entire Old City), next to the Temple Mount and ancient City of David, down to the Pool of Siloam. This is perpendicular to the Valley of Hinnom. But I didn’t go further into that area, due to the significant unrest in the Arab portions of Jerusalem when we were there. We even got tear gas in our eyes when visiting Rachel’s Tomb in Bethlehem. It would have been strange indeed to walk the valley that in Jesus’ mind was akin to hell itself, due to the ritual childkilling that so often took place there.

It seems fairly obvious also that in the richly metaphorical Jewish mind, high places were often seen as more holy (Mt. Zion and Mt. Moriah, where the temple was, Mt. Sinai, and on and on). Thus it stands to reason that low places (i.e., valleys) would come to also symbolize Sheol and later, hell. The most unholy thing imaginable in the Jewish mind (including the mind of Jesus, we might surmise), was the sacrificing of one’s own children to be burned to death in a furnace in order to please some false god.

We know from biblical history that child sacrifice to Ba’al or Molech (which is what abortion is at bottom: a person’s own baby sacrificed to the idolatrous gods of greed, hedonism, or sexual “freedom”) took place there:

2 Kings 23:10 (RSV) And he [King Josiah] defiled To’pheth, which is in the valley of the sons of Hinnom, that no one might burn his son or his daughter as an offering to Molech.

2 Chronicles 28:3 and he [King Ahaz] burned incense in the valley of the son of Hinnom, and burned his sons as an offering, according to the abominable practices of the nations whom the LORD drove out before the people of Israel.

Jeremiah 19:2-5 and go out to the valley of the son of Hinnom at the entry of the Potsherd Gate, and proclaim there the words that I tell you. [3] You shall say, `Hear the word of the LORD, O kings of Judah and inhabitants of Jerusalem. Thus says the LORD of hosts, the God of Israel, Behold, I am bringing such evil upon this place that the ears of every one who hears of it will tingle. [4] Because the people have forsaken me, and have profaned this place by burning incense in it to other gods whom neither they nor their fathers nor the kings of Judah have known; and because they have filled this place with the blood of innocents, [5] and have built the high places of Ba’al to burn their sons in the fire as burnt offerings to Ba’al, which I did not command or decree, nor did it come into my mind;

Jeremiah 32:35 They built the high places of Ba’al in the valley of the son of Hinnom, to offer up their sons and daughters to Molech, though I did not command them, nor did it enter into my mind, that they should do this abomination, to cause Judah to sin. 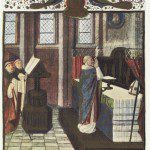 August 15, 2015 My Comments Policy: Thoughts on Amiable and Constructive Dialogue
Recent Comments
0 | Leave a Comment
"The Father's of the Church, Councils, and Popes actually interpreted and taught that Matthew 5:32 ..."
Ammi Matthew 19:9 “Divorce Exception” Translation Bias
"As the nature and direct cause or the effects of 'original sin' have yet to ..."
klatu Could Jesus Have Possibly Inherited Original ..."
"Some views thrive on being oppositional to other ones. It's also true that a certain ..."
Dave Armstrong Reply to Gavin Ortlund’s “Relics: A ..."
"Mr. Armstrong,, this article reminded me of a recent video I was watching by a ..."
Analytic Computist Reply to Gavin Ortlund’s “Relics: A ..."
Browse Our Archives
Related posts from Biblical Evidence for Catholicism