Biblical Evidence for Physical Objects as Aids in Worship

(Called “Idolatry” By Some Protestants) 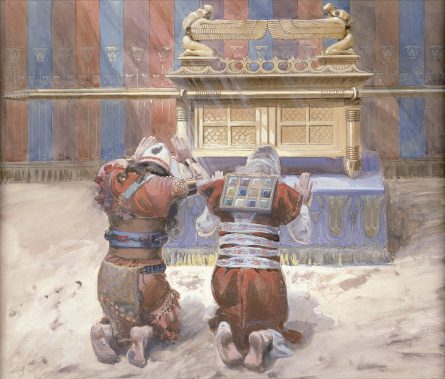 Leviticus 26:1 You shall make for yourselves no idols and erect no graven image or pillar, and you shall not set up a figured stone in your land, to bow down to them; for I am the LORD your God. . . .

Micah 5:13 and I will cut off your images and your pillars from among you, and you shall bow down no more to the work of your hands;

Exodus 3:2-5 And the angel of the LORD appeared to him in a flame of fire out of the midst of a bush; and he looked, and lo, the bush was burning, yet it was not consumed. [3] And Moses said, “I will turn aside and see this great sight, why the bush is not burnt.” [4] When the LORD saw that he turned aside to see, God called to him out of the bush, “Moses, Moses!” And he said, “Here am I.” [5] Then he said, “Do not come near; put off your shoes from your feet, for the place on which you are standing is holy ground.” (cf. Acts 7:30) [the burning bush]

Exodus 19:17-20 Then Moses brought the people out of the camp to meet God; and they took their stand at the foot of the mountain. [18] And Mount Sinai was wrapped in smoke, because the LORD descended upon it in fire; and the smoke of it went up like the smoke of a kiln, and the whole mountain quaked greatly. [19] And as the sound of the trumpet grew louder and louder, Moses spoke, and God answered him in thunder. [20] And the LORD came down upon Mount Sinai, to the top of the mountain; and the LORD called Moses to the top of the mountain, and Moses went up. [Mt. Sinai, smoke and fire]

Exodus 25:22 There I will meet with you, and from above the mercy seat, from between the two cherubim that are upon the ark of the testimony, I will speak with you of all that I will give you in commandment for the people of Israel. [carved statues on the ark of the covenant]

Joshua 7:6-8 Then Joshua rent his clothes, and fell to the earth upon his face before the ark of the LORD until the evening, he and the elders of Israel; and they put dust upon their heads. And Joshua said, “Alas, O Lord GOD, why hast thou brought this people over the Jordan at all, to give us into the hands of the Amorites, to destroy us? Would that we had been content to dwell beyond the Jordan! [8] O Lord, what can I say, when Israel has turned their backs before their enemies! [ark of the covenant]

1 Kings 6:23-35 In the inner sanctuary he made two cherubim of olivewood, each ten cubits high. [24] Five cubits was the length of one wing of the cherub, and five cubits the length of the other wing of the cherub; it was ten cubits from the tip of one wing to the tip of the other. [25] The other cherub also measured ten cubits; both cherubim had the same measure and the same form. [26] The height of one cherub was ten cubits, and so was that of the other cherub. [27] He put the cherubim in the innermost part of the house; and the wings of the cherubim were spread out so that a wing of one touched the one wall, and a wing of the other cherub touched the other wall; their other wings touched each other in the middle of the house. [28] And he overlaid the cherubim with gold. [29] He carved all the walls of the house round about with carved figures of cherubim and palm trees and open flowers, in the inner and outer rooms. [30] The floor of the house he overlaid with gold in the inner and outer rooms. [31] For the entrance to the inner sanctuary he made doors of olivewood; the lintel and the doorposts formed a pentagon. [32] He covered the two doors of olivewood with carvings of cherubim, palm trees, and open flowers; he overlaid them with gold, and spread gold upon the cherubim and upon the palm trees. [33] So also he made for the entrance to the nave doorposts of olivewood, in the form of a square, [34] and two doors of cypress wood; the two leaves of the one door were folding, and the two leaves of the other door were folding. [35] On them he carved cherubim and palm trees and open flowers; and he overlaid them with gold evenly applied upon the carved work. [people prayed to God toward or in the temple and the walls included carved figures of angels]

1 Kings 8:22 Then Solomon stood before the altar of the LORD in the presence of all the assembly of Israel, and spread forth his hands toward heaven; [altar]

1 Kings 8:54 Now as Solomon finished offering all this prayer and supplication to the LORD, he arose from before the altar of the LORD, where he had knelt with hands outstretched toward heaven; [altar]

1 Chronicles 16:4 Moreover he appointed certain of the Levites as ministers before the ark of the LORD, to invoke, to thank, and to praise the LORD, the God of Israel. [ark of the covenant]

1 Chronicles 16:29 Ascribe to the LORD the glory due his name; bring an offering, and come before him! Worship the LORD in holy array; [clothes, altar]

2 Chronicles 3:7 So he lined the house with gold — its beams, its thresholds, its walls, and its doors; and he carved cherubim on the walls. (cf. Ezek 41:20,25) [people prayed to God toward or in the temple and the walls included carved figures of angels]

2 Chronicles 6:20 that thou mayest hearken to the prayer which thy servant offers toward this place. [temple]

2 Chronicles 6:21 And hearken thou to the supplications of thy servant and of thy people Israel, when they pray toward this place; yea, hear thou from heaven thy dwelling place; and when thou hearest, forgive. [temple]

2 Chronicles 6:22 If a man sins against his neighbor and is made to take an oath, and comes and swears his oath before thy altar in this house, [altar]

2 Chronicles 6:26-27 When heaven is shut up and there is no rain because they have sinned against thee, if they pray toward this place, and acknowledge thy name, and turn from their sin, when thou dost afflict them, [27] then hear thou in heaven, and forgive the sin of thy servants, thy people Israel, when thou dost teach them the good way in which they should walk; and grant rain upon thy land, which thou hast given to thy people as an inheritance. [temple]

2 Chronicles 6:29-30 whatever prayer, whatever supplication is made by any man or by all thy people Israel, each knowing his own affliction, and his own sorrow and stretching out his hands toward this house; [30] then hear thou from heaven thy dwelling place, and forgive, and render to each whose heart thou knowest, according to all his ways (for thou, thou only, knowest the hearts of the children of men); [temple]

2 Chronicles 6:32-33 Likewise when a foreigner, who is not of thy people Israel, comes from a far country for the sake of thy great name, and thy mighty hand, and thy outstretched arm, when he comes and prays toward this house, [33] hear thou from heaven thy dwelling place, (cf. 1 Ki 29-30,35,42) [temple]

2 Chronicles 7:3 When all the children of Israel saw the fire come down and the glory of the LORD upon the temple, they bowed down with their faces to the earth on the pavement, and worshiped and gave thanks to the LORD, saying, “For he is good, for his steadfast love endures for ever.” [fire, temple]

Psalm 5:7 But I through the abundance of thy steadfast love will enter thy house, I will worship toward thy holy temple in the fear of thee. [temple]

Psalm 28:2 Hear the voice of my supplication, as I cry to thee for help, as I lift up my hands toward thy most holy sanctuary. [sanctuary]

Psalm 29:2 Ascribe to the LORD the glory of his name; worship the LORD in holy array. [clothes]

Psalm 96:9 Worship the LORD in holy array; tremble before him, all the earth! [clothes]

Psalm 134:2 Lift up your hands to the holy place, and bless the LORD! [temple]

Psalm 138:2 I bow down toward thy holy temple and give thanks to thy name for thy steadfast love and thy faithfulness; for thou hast exalted above everything thy name and thy word. [temple]

Isaiah 27:13 those who were driven out to the land of Egypt will come and worship the LORD on the holy mountain at Jerusalem. [temple]

Ezekiel 46:3 The people of the land shall worship at the entrance of that gate before the LORD on the sabbaths and on the new moons. [gate]

Daniel 6:10 When Daniel knew that the document had been signed, he went to his house where he had windows in his upper chamber open toward Jerusalem; and he got down upon his knees three times a day and prayed and gave thanks before his God, as he had done previously. [Jerusalem]

Romans 12:1 I appeal to you therefore, brethren, by the mercies of God, to present your bodies as a living sacrifice, holy and acceptable to God, which is your spiritual worship. [bodies of Christians]

Philippians 1:20 as it is my eager expectation and hope that I shall not be at all ashamed, but that with full courage now as always Christ will be honored in my body, whether by life or by death. [St. Paul’s own body]

Revelation 4:10 the twenty-four elders fall down before him who is seated on the throne and worship him who lives for ever and ever; they cast their crowns before the throne, singing, [God’s throne, crowns]

Revelation 8:3 And another angel came and stood at the altar with a golden censer; and he was given much incense to mingle with the prayers of all the saints upon the golden altar before the throne; [altar in heaven] 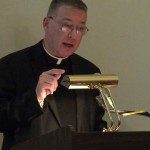 February 22, 2016
Dialogue with Priests on "Eucharistic Ministers"
Next Post 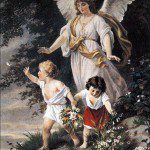 February 23, 2016 Bible on Invocation of Angels and Saved Human Beings
Recent Comments
0 | Leave a Comment
"I Totally agree Calvinists are a minority. Their trick is they infiltrate every avenue to ..."
James Calvinism: Tiny Minority Historically & Demographically
"As I wrote in the paper:In several other instances, men are also bowed down to ..."
Dave Armstrong Bible on the Veneration of Angels ..."
"Angels are royal princes so of course they are worthy of veneration and bowing down ..."
Zoe Bible on the Veneration of Angels ..."
"Yes, because it's two different positions. Infallibility is a protection from error when one is ..."
Dave Armstrong Reply to Lucas Banzoli: 2 Tim ..."
Browse Our Archives
Related posts from Biblical Evidence for Catholicism