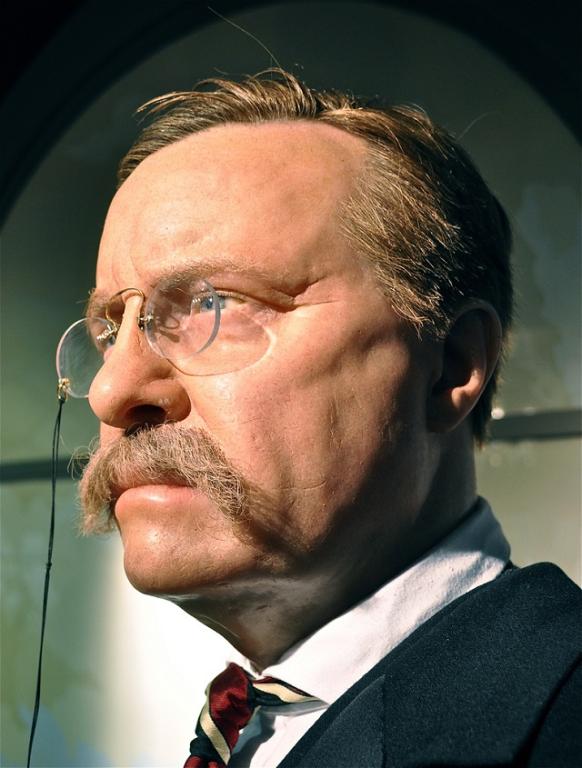 President Theodore Roosevelt: the most famous 3rd party presidential candidate. He ran on the “Bull Moose” (or, Progressive) Party ticket in 1912, and received 27% of the votes, to President William Howard Taft’s 23%, and Woodrow Wilson’s 42%. This was the best 3rd party result ever, and the only time a 3rd party got more votes than one of the two major parties. And of course it handed liberal Democrat Wilson the election. Some things never change . . . [Flickr image from Madame Tussauds / CC BY-SA 2.0 license]

Mike Maturen is running for President for the American Solidarity Party. I wrote on his Facebook page that I’d vote for him in 2020 if he won in 2016 (which gave him a chuckle). That gave me an idea for a Facebook post about third parties. Here it is:

I’m willing to vote for a third party candidate, provided he or she is pro-life, knows what Aleppo is, is not a socialist or radical secularist, and wins in 2016. I’ll be glad to give them my vote in 2020. Fair enuff?

This gives me common ground with Mark Shea, Scott Eric Alt, and legions of my Facebook friends who are voting 3rd party. I just have a few more requirements than they do.

Mike showed up on my lively Facebook thread, and we had a friendly dialogue. His words will be in blue:

Mark Shea has mentioned in his blog, on his radio program, and on Facebook that he is supporting my candidacy for President.

Winning the electoral college, in a presidential election. What’s your definition?

Ahh…darnit. For me, a win is getting the massive media coverage we have been getting (to millions of readers) and managing to be official in 18 states and counting…all within 4 or 5 months!

I love it if you are distributist (I am too) and orthodox Catholic. But you have to actually win something. This is my objection. We can be all principles and no pragmatism and practicality at all, but I don’t see what that accomplishes.

I would call that a “moral victory” and good in and of itself (as far as it goes); not an election victory.

Meanwhile, we have a real person with real policies (which have real results in the real world), who is about to radicalize the country and the Supreme Court, and it is of paramount importance to defeat her.

Your effort — commendable though it may be — does nothing towards achieving that end.

I have no objection to voting 3rd parties on a more local level, but they still have to have some chance of actually winning. I’ve voted for several pro-life Democrats (that most rare species) for state offices.

But it’s also important to have as many [good, pro-life, non-RINO] Republicans in office as we can, because that has influence on presidential elections.

Here is my view in Michigan (since you are a fellow inhabitant of the peninsula): Hillary is currently up by more than 11 points. Assuming she doesn’t have a massive shoe drop from WikiLeaks (that the media actually reports), she is sure to win the state. Based on the last presidential election (2012), in which 4,730,961 votes were cast, Hillary will get 2,209,359 of those votes, beating Trump by 539,330 votes. All she needs to win by is one vote in order to take all of the electoral college votes. That means that there will be 539,329 wasted votes. So why not use those votes to send a message? Why not vote for a party of conscience? This whole “voting for a third party is voting for (insert your vilified major party candidate here)” is utter nonsense.

I have acknowledged that protest votes make some sense if they don’t affect the outcome anyway. But my objection is to third parties, for reasons I have outlined here.

I want to vote for Trump so I can say that I did the only thing that could possibly have prevented the catastrophic disaster, if indeed it descends upon us. Voting third party has no chance of stopping Mrs. Rodham Rodham Clinton.

And in battleground states it may very well hand the election to her. It enables her to win. That’s not even arguable. If she wins by a hair, we can certainly say that it was due to our ridiculous internal division. By “our” I mean, broadly, those who hold to moral traditionalism and conservative principles.

Democrats seem to do a far better job of implementing a great deal of Catholic Social Teaching than do Republicans…albeit most likely by accident.

Really? How have they helped the poor and the downtrodden in the last eight years? The only thing they have done, that I can see, is get poorer people health care at no cost to themselves. But that is through Medicaid, which is a program both parties fully support. It was expanded in Michigan by a Republican governor.

This supports one of my maxims: “third party people compliment liberals more than they do conservatives.”

Thanks for the verification, Mike.

Well, if he is going to line up with Catholic Social Teaching, he is going to have to change his tune on immigration, refugees, death penalty, torture, preemptive war, etc. Plus he will have to make sure that a good social safety net is in place. We’ll see if he is willing to do that. Of course, with almost 100 million Catholics lobbying him, there is hope!

The right agreed with Bill Clinton when he reformed welfare to make it workfare. I would agree on many of the other things with you (though with some qualifications). I thoroughly disagree that the Democrats are closer to Catholic teaching than Republicans.

But again, you haven’t addressed it. He is opposed to Catholic Social Teaching on all of those issues, Dave.

How many votes did you get? I’m curious.

Thank you. How about running for Congressman or Senator, where you could actually win?

You would agree, right, that you could do relatively more good actually in an office? Again, I am perfectly sincere. My point is that if you have good views to offer, I’d like to see you in an office, not just running to make a point. Even if I agreed that there was importance in making such a point, I would still think being in government somewhere is having more positive, Catholic personal influence.

I have, and will consider it. What was most important this election, though (due to the new nature of our party) was to get the word out an create momentum. The best way to do that was to run a Presidential candidate and heavily promote it….not run a guy for Mayor of a little town in northern Michigan. Our strategy worked brilliantly! We were featured in hundreds of articles across the country…even internationally. We have been heard on radio and podcasts all over the place. We were able to grow the party to have members in all 50 states plus DC and Puerto Rico. Wikipedia moved the party from the bottom of the barrel to being now named a major Third Party. We had access to 332 electoral votes in this election, making us the 7th most influential third party in the country. Donations to the party are way up. Now we can get about the business of building the grassroots, recruiting state and local candidates, etc. I will likely play a role of advising on CST issues to members of the Senate and Congress…after I make contact with all of them, we’ll see what the level of interest is.

That makes perfect sense to me. It wasn’t just in and of itself, but for the purpose of creating interest in something which could have real, practical effect in the future. Thanks so much for clarifying that.

Here are a few other thoughts of mine on third parties, from the Facebook discussion:

If many so-called “conservatives” don’t throw away their vote (as happens so many times), Clinton will probably lose. If Trump loses, that will be a prime reason. There are other reasons, too, including several mistakes and poor strategies by Trump, but that will arguably be the main one.

I agree that voting 3rd party in a state where, clearly, Trump or Rodham Clinton will win, is valid as a “protest.” I can never agree with doing so in a battleground state. I think this position has legitimate force, but it’s as far as I go with 3rd party thinking, when the guy has no chance. That’s the key. I have no essential problem with that (though I still wouldn’t do it, myself) , because it doesn’t help give Mrs. Rodham Rodham Clinton the election.

Catholics settle for the one who will put in place policies consistent with our morals and values and priorities. We are allowed to “settle” for a candidate who is relatively better than the other, while not perfectly in line with all Catholic teachings.

Third Partyism is a form of puritanistic idealism that is disconnected from reality, and the real effects of real choices in politics. 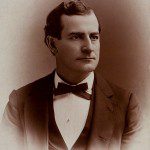 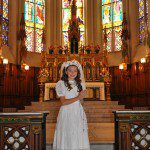 October 18, 2016 Further Thoughts on Receiving Holy Communion in the Hand
Recent Comments
0 | Leave a Comment
"This particular topic ain't my cup of tea or in my area of knowledge."
Dave Armstrong Table of Nations (Gen 10), Interpretation, ..."
"Greetings Mr. Armstrong,Please, could you comment on this article by the late Steve Hays. He ..."
Quantum Computist Table of Nations (Gen 10), Interpretation, ..."
"Nonsense. It's not a matter of "ignoring the pope." He gave bishops the right to ..."
Dave Armstrong Traditionis Custodes: Sky is Here After ..."
"I think this proves the opposite point of what Mr. Armstrong seems to intend. The ..."
Jared P. Traditionis Custodes: Sky is Here After ..."
Browse Our Archives
get the latest updates from
Biblical Evidence for Catholicism
and the Patheos
Catholic
Channel
POPULAR AT PATHEOS Catholic
1