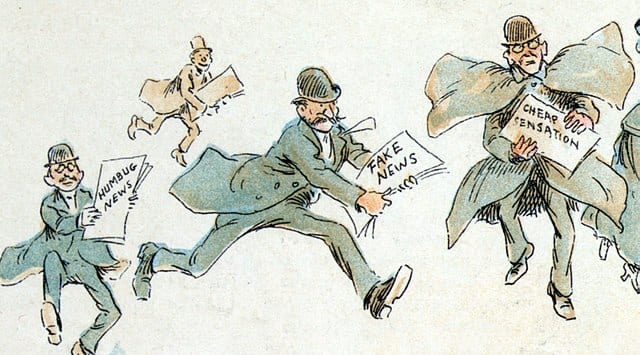 Someone said that the Covington / March for Life story ought to go away soon. The people who have made fools of themselves — including many Catholics — condemning the Covington students (many of whom, but not all, have retracted) are quite happy to see it go away.

I think it’s a good learning / teaching moment, because it is perhaps the classic and quintessential example (one of hundreds in just the last year alone) of liberal / Big Liberal Media hyper-bias and anti-Christian / anti-pro-lifer intentions.

Even now, there are several widely-read Catholic demagogues who have dug in and refused to admit any significant wrong on their part. If indeed there was any truth to the story that the Covington kids were a bunch of bigots and morons who hate Indians and black people, we can be quite sure that the story would still be big news: rah-rahed by liberals and third-partiers and Never Trumpers: because then it would be anti-Trump, which was what was hoped and wished for from the beginning.

But because it didn’t turn out that way (drats!), and they are embarrassed, they — except the most “entrenched”, who carry on with their bigoted mythmaking —  wanna get away from it ASAP.

Someone asked someone else on another Facebook page if she thought that “mocking tomahawk chops and mock chanting directed towards  Native Americans” was acceptable. I replied that it occurred probably for the same reason that sports teams called the “Indians” and “Braves” and “Redskins” (a thing I have argued against and was almost laughed to scorn for doing so) are — or have been until very recently — completely acceptable.

High school kids do lots of silly and impulsive and sometimes offensive things. It doesn’t make them evil and malicious (or bigots, as it were). It makes them immature and prone to group behavior as we all are, of whatever age.

Liberals wanted them to be bigots because it was a way to 1) discredit the March for Life, and 2) discredit Trump and conservatives in general, as racists: which of course is precisely the liberal Big Lie and never-ending mantra.

But why would anyone think that banging a drum two inches away from someone’s face for five minutes or so is acceptable behavior? That was from a grown man. Is that not at least as silly and immature (if not more so) as how high school kids (predictably) responded? Kyle Smith, writing at National Review, made some marvelously sarcastic remarks about this:

[N]aturally, when you see a group of individuals “attacking” another group in a public place where there are lots of police, the proper response when you’re a 64-year-old man is not to inform a cop but to take charge of the situation yourself. Go up to the “attackers,” stand toe to toe with one of them and start loudly banging a drum in his face. This is a known mollification technique and it absolutely can never fail to defuse tensions. However, if it does fail, what you should do is move the drum even closer to the other person’s face, so it’s just a few inches from the guy’s ears, and keep banging away for several more minutes.

Even if we grant that both sides were wrong, or did wrong things (to what relative degree is debatable), why is all the attention being paid to young high school kids (that’s only 14-17) and not an adult who acted at least as objectionably? Nick Sandmann: the main kid who is being talked about (and receiving death threats) simply stood there and did nothing.

Nathan Phillips, in my opinion, was relatively a lot more wrong: being the provocateur, and older (and the typical left-wing activist as well). We don’t have to hold that the kids were perfect in order to establish that they have been victimized and treated abominably in all this.

If I were to go up to some group of high school kids at some march or rally and started singing Gregorian Chant two inches away from one for five minutes, and they replied en masse by mock chanting back, would that be intrinsically bigoted and “anti-Catholic” behavior, or would it be simply what most human groups in that situation (especially of high school age) would do? My behavior in that instance would be* eminently humorous and mockable. And so we expect the reply to be counter-mockery and humor and laughing.

Does their behavior prove that they hate Indians? No, not at all. Rather, it is presupposed by those who virtually hate people in MAGA hats, that they are already bigots, simply by wearing the hat and liking Trump. That is the previous Big Lie that underlies all this mess.

In the liberal mindset (at least the far left / true blue / true believer portion of it, which seems to be getting larger all the time), every Indian is perfect just because he is an Indian, whose group has been (I agree) horribly oppressed and murdered by the many thousands. That doesn’t follow at all. But this is how they think. Everyone is judged based on groups (identity politics) and symbolic thinking rather than the particular facts of the matter.

So he must have been perfect, and the white kid wearing the MAGA hat is a wicked bigot because he wore the hat and “we all know” [wink wink] that all Trump supporters are automatically bigots.

I would have acted precisely as the young man did: stood there, sometimes smiling. Then when the drumming and grandstanding stopped ( I love Native American music, by the way), I would have politely asked him, “hey, do you want to dialogue about this and try to find common ground?”

At that point, my experience 95% of the time in my now nearly 38 years of evangelism (including innumerable online interactions), is that they do not want to talk, and so I go about my business, thinking, “well, at least I tried and offered an opportunity for more unity and understanding.”

Lies are the problem, whether from the right or left. I just heard tonight that 82% of Democrats think Trump is a racist. So all that baggage is out there right now, and it’s a lie. This means that they would also tend to think that anyone who votes for Trump or supports him must also be a racist. Thus the false premise leads to another Big Lie and slander.

That’s why the liberal media went after those kids at the March for Life. They had MAGA hats after all, so they must all be racists! And so this is how they interpreted the highly edited video. They must be racists, and the Native American must be a perfect saint because of the sad oppression and near-genocide of that group.

This must stop: the demonization of huge (multi-millions in size) groups of people. That’s the saddest thing about political and ethical discourse today: the outrageous things that people blithely assume and believe about massive groups that they aren’t in.  And the right, too, has to stop whatever lies they believe about the left (that they’re all Communists / socialists and adulterers and moral relativists and atheists and what-not). There’s more than enough blame to go around on all parts of the political spectrum. We can’t make such sweeping judgments about groups of tens of millions of people. It’s absurd and ridiculous, disgraceful and outrageous and pathetic.

We’re all accountable for our words, and the Bible says, “let not many be teachers.” Every writer — especially of theological and spiritual and religious topics — ought to be aware of that with every word they write.

It’s really easy to be negative. It comes naturally to all of us. But being positive is much harder work. As Catholics, we know that to be positive and loving takes grace. So what does that say about folks (self-proclaimed Christians) who rarely exhibit a positive spirit and love: who are always complaining and running down others? I truly fear for them. This is very far from the spirit of Jesus.

Clearly, any conclusions (including my own) that were made were premature. I regret that, too, and regret whatever I may have done or said that added to the noise and toxicity of this discussion. . . .

One thing I can conclude right now: this episode brought out the worst in a lot of people. Social media made that abundantly clear last night. Satan is clever that way. The Father of Lies has a gift for turning Catholics against each other. [Dave: truer words were never spoken!]

The mainstream media deliberately omitted the first part of the video. It’s their classic cynical editing, to make conservatives and pro-lifers look as bad as they can. Having been at this march myself and many pro-life rescues I know firsthand how the media deliberately distorts things.

Thanks, Big Liberal Media. You’ve now ruined the lives of a good faithful Catholic family and succeeded in smearing an entire pro-life march by distorting what happened in this sad incident. That’s what you love to do, but the relentless lying and smear tactics are gonna come crashing down on your holier-than-thou heads yet again. As the Bible states: “be sure your sin will find you out” (Numbers 32:23, RSV).

The process is already well under way, and the fact that liberal zealots and polemicists and their lackeys no longer want to discuss it is proof-positive that they themselves know full well that they stepped in it big-time this time, and exposed their laughable and ridiculous ultra-biased methodology once again.