“Anti-Catholic”: Scholars Use it Both as a Noun & Adjective 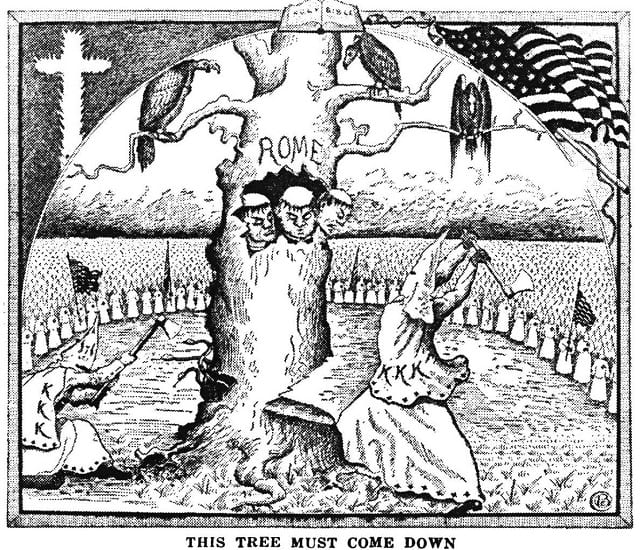 It’s been stated that anti-Catholic, if used at all, is properly utilized only as an adjective and not as a noun (e.g., “the anti-Catholics on the Internet often blast Catholic Mariology”). The much more frequent usage is indeed as an adjective, but it is not altogether improper to also use it as a noun. As an analogy, take, for example, anti-Communist. That word can be either an adjective or a noun, in the same form, too:

To illustrate, a Canadian news source included this sentence in an article from 25 July: “In Berlin, Obama almost sounded like Ronald Reagan, who became a strong anti-Communist by fighting them in Hollywood.”

Or, see an article by Rich Lowry, from 2-29-08, where he wrote: “[the late William F.] Buckley was an anti-Communist to the marrow of his bones, whose lifelong mission was to crush totalitarianism.”

Anti-abortionist is habitually used in the same way. And anti-Catholic works similarly, by straightforward analogy:

So we could say, “John Knox’s position on the Catholic Church was anti-Catholic: that is, characterized by belief that it was not a Christian system of theology or Christian worldview.” That’s a lot of work, especially if multiple use is involved. So we can express the same sentiment by using a noun instead: “John Knox was an anti-Catholic.” I don’t see anything ungrammatical about that at all. If I did, I certainly wouldn’t use the word in this fashion myself.

For some reason, dictionaries often don’t list anti-Catholic. This is the case in my huge 2129 page volume, that looks like the New York white pages. But it has several analogous “anti” terms listed (in identical form) as both noun and adjective, or noun only:

That’s sufficient to more than rest my “grammatical case” on this, I think, but I can also cite (non-Catholic) scholars using anti-Catholic as a noun:

Anti-Catholic memories were long and hatreds were deep . . . anti-Catholics in America conveniently portrayed the church as a juggernaut poised to crush the United States . . . the editor of the Protestant Home Missionary picked up the cry for the West, where was to be fought a great battle “between truth and error, between law and anarchy — between Christianity . . . and the combined forces of Infidelity and Popery” . . . Samuel F.B. Morse, both the inventor of the telegraph and the noisiest anti-Catholic around . . . (p. 273) (Martin Marty [widely respected Protestant Church historian, University of Chicago], Pilgrims in Their Own Land: 500 Years of Religion in America, New York: Penguin Books, 1984)

Bigotry, especially by anti-Catholics, has been so common that any criticism of Catholicism is likely to be labeled by intellectuals as well as by pro-Catholics as intolerant and unfair . . . (p. 300)

Many anti-Catholics are convinced that long-range plans of the Catholic Church include repeal of the First Amendment . . . (p. 304) The Protestant Irish from Ulster were among the most fervent anti-Catholics a century ago. (p. 312)

How should evangelicals view Roman Catholicism? This is an extremely controversial question, and often emotionally charged. The spectrum of opinion among conservative Protestants generally ranges from those who see the Catholic church as foundationally Christian (but with many doctrinal deviations), to those who dismiss Catholicism outright as an inherently evil institution. It would seem, however, that those of the latter persuasion (“anti-Catholics”) are in the ascendancy. . . .

An additional criticism is that the book does not always distinguish carefully enough between anti-Catholics and those who are merely critical of Catholic doctrine. If this distinction is not made, then all Protestants become anti-Catholic. By the same reasoning, all Catholics become anti-Protestant. In Keating’s defense, however, I do believe he normally makes this distinction . . .

If we do a Google Advanced Book Search for anti-Catholics (since the plural form can only be a noun), we find many dozens more examples, including such use by historian Denis G. Paz, in a book published by Stanford University Press, St. John Henry Cardinal Newman in his famous work, The Idea of a University, in the Catholic Encyclopedia, apologist Bertrand Conway, in his bestseller, The Question Box, Cardinal Wiseman, historian George McKenna in a book published by Yale University Press, and many others.

I’m not trying to do beat this topic to death, but since I have been so criticized by anti-Catholics themselves for my use of the term (whether as adjective or noun), I wanted to do a little research on this aspect as well.

Generally speaking, I think the meanings and definitions of words are extremely important to any discussion. Again, since I am so often challenged in this regard, I have made another defense, that I think can stand up very well to scrutiny because I approached the topic from several angles.

Proper Theological Application of the Term “Anti-Catholic” (vs. Frank Turk) [9-24-05]