Trump Did NOT Mock a Reporter’s Disability

Trump Did NOT Mock a Reporter’s Disability July 20, 2020 Dave Armstrong 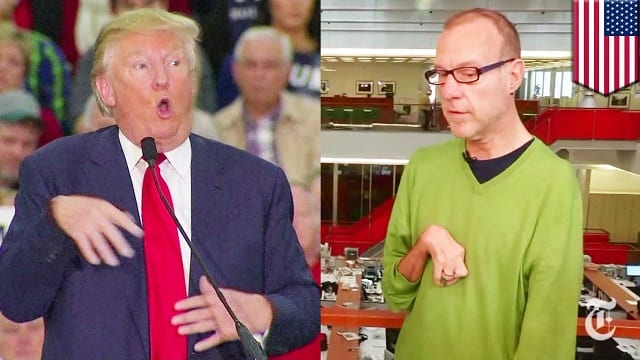 This lie (a real whopper) is up there with the most notorious anti-Trump lies (like supposedly calling Neo-Nazis “very fine people”), and there is no way that the people who promulgated it did not know that it was patently untrue. They put it out because they thought it would work to defeat Trump. They couldn’t care less that it was a flat-out lie and full-scale distortion of what actually occurred. It was decisively refuted and exposed for the filth that it is in two articles:

The True Story: Donald Trump Did Not Mock a Reporter’s Disability (Catholics 4 Trump, 7-27-16)

First, some background. The first article recounts how Trump said to George Stephanopolous in an interview on ABC’s “This Week” (11-22-15):

There were people that were cheering on the other side of New Jersey, . . . as the World Trade Center came down. I know it might be not politically correct for you to talk about it, but there were people cheering…as those buildings came down.

The liberal media outlets then went nuts making out that there was absolutely no proof of such a thing. Unfortunately, a Washington Post reporter, Serge Kovaleski, provided evidence in an article in the Compost on September 18, 2001. He wrote:

In Jersey City, within hours of two jetliners’ plowing into the World Trade Center, law enforcement authorities detained and questioned a number of people who were allegedly seen celebrating the attacks and holding tailgate-style parties on rooftops while they watched the devastation on the other side of the river.

Oops! How embarrassing, huh? So the Washington Compost sought ought Kovaleski to do some damage control. And like a good liberal and party man, Kovaleski did the best he could to backtrack:

I certainly do not remember anyone saying that thousands or even hundreds of people were celebrating. That was not the case, as best as I can remember.

Of course, this is good, Clintonian lawyer-talk, since Trump had not mentioned “hundreds” of such people, let alone “thousands.” So yeah, that statement in that form was true. But it was meant to obfuscate.

At this point I will cite key excerpts from the first article:

Enter Donald Trump’s rally in South Carolina soon thereafter. During the rally Trump pointed all of this out and paraphrased Kovaleski’s backtracking as he impersonated a groveling reporter changing his story under pressure. While he did this, Trump moved his hands around quickly, acting flustered.

Soon thereafter, the media revealed still photos of Kovaleski with his right hand in a permanently flexed position downward announcing that he was disabled. The media then shifted from trying to defend their oversight of the 9/11 Post article and instead, with disapproving shocked outrage, accused Trump of mocking a reporter’s disability. Some liberals went even further and freeze-framed a millisecond of the Trump video at the exact moment when his hand went into a flexed posture. . . .

[photograph provided in the article; and it is the photograph at the top of this post]

The media’s clear implication was that Trump was mocking the way Kovaleski moved his arms. People watching the clip of Trump’s impersonation only knew that Kovaleski was disabled. Thus, they naturally assumed Kovaleski’s disability must be similar to cerebral palsy where he has limited control of his movements and is prone to have muscle spasms or move his arms in jerky motions as Trump was doing at the rally. This is precisely the image the media wanted in people’s minds. They wanted this to be the story: that Donald Trump knowingly and intentionally mocked the flailing arm motions of someone who can’t control his muscles. They knew this would naturally trigger a visceral reaction of disgust from viewers and outrage amongst the disabled and all decent Americans, many of whom, to this day, think this is exactly what happened. . . .

Notice how the media only showed and still shows photos of him. This was done for a reason. As it turns out, Kovaleski’s disability is a congenital condition called arthrogryposis. Arthrogryposis causes restricted movement in the joints but does not cause spasms or uncontrolled moving of the limbs like cerebral palsy does. . . .

In addition, Trump used the same flailing arm movements in a South Carolina rally to impersonate a flustered Ted Cruz being asked about waterboarding. To my knowledge Cruz is not physically disabled. . . .

Thus, Trump’s impersonations of a flustered reporter several months ago was turned into a left-wing and Establishment GOP narrative whereby Trump somehow hates the disabled. This despite the fact that Trump has given millions to charities that help the disabled including raising nearly six million dollars for Wounded Warriors just recently, a million of which was his own money.  In addition, Liz Crokin, a journalist who covered Donald Trump for ten years recalls the following:

In 1988, a commercial airline refused to fly Andrew Ten, a sick Orthodox Jewish child with a rare illness, across the country to get medical care because he had to travel with an elaborate life-support system. His grief stricken parents contacted Trump for help and he didn’t hesitate to send his own plane to take the child from Los Angeles to New York so he could get his treatment…

In 2000, Maury Povich featured a little girl named Megan who struggled with Brittle Bone Disease on his show and Trump happened to be watching. Trump said the little girl’s story and positive attitude touched his heart. So he contacted Maury and gifted the little girl and her family with a very generous check. . . .

It turns out that at the very same South Carolina rally Trump imitated Kovaleski, he also used similar arm and hand gestures to imitate a very non-disabled general who was asked about ISIS. Do you remember the media reporting this? Watch below: . . .

As it turns out, Trump’s story was also confirmed on a local CBS station (see actual footage in the link) shortly after 9/11.

There is much more information in the article. The second follow-up one provides additional video evidence:

1) Trump mocking himself becoming flustered, with arm movements, in a May 17, 2005 interview with Larry King.

3) 11-25-15: imitating a flustered reporter and general in the same speech, with the arm movements. This is obviously a common routine that he does.

4) Two more defunct videos showed him doing the same with regard to Ted Cruz and Donna Brazile.

The Bible has some choice words about deliberate, habitual liars:

Revelation 21:8 (RSV) But as for the cowardly, the faithless, the polluted, as for murderers, fornicators, sorcerers, idolaters, and all liars, their lot shall be in the lake that burns with fire and sulphur, which is the second death.

See the related article of mine:

The Trump-Haters Step in it Yet Again! [Trump Supposedly Ignores a Handicapped Boy] [7-31-17] 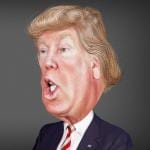 July 20, 2020
How Much Sin Disqualifies a Politician / President?
Next Post 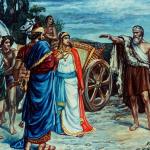 July 21, 2020 Trump: Like King Ahab? Can We Vote for Him? (vs. Dr Edwin Tait)
Recent Comments
0 | Leave a Comment
Browse Our Archives
get the latest from
Biblical Evidence for Catholicism
Sign up for our newsletter
POPULAR AT PATHEOS Catholic
1