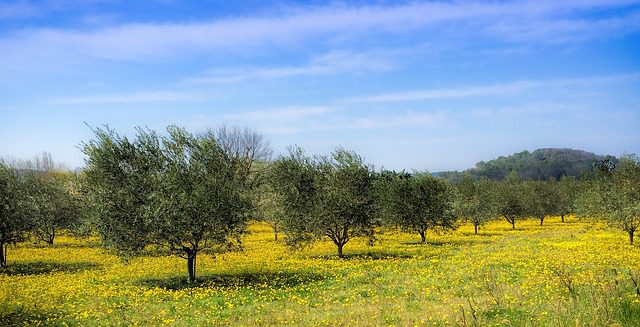 Another reason that it may be speculated that Jesus’s crucifixion did not take place in Nisan is because of the branches and palm trees detailed
in several of the narratives. Mark 11:8 and Matthew 21:8 reported that “branches from the trees” were cut down and used as straw on the road but omitted details about what type of tree the branches came from. Nonetheless, Mark and Matthew clearly implied two significant facts: (1) these trees were standing in Jerusalem and (2) the branches were leafy. . . .

Having asserted that both Matthew and Mark refer to “leafy” branches, he then examines the opinion of some linguistic aids and contradictorily concludes that “Matthew has either omitted or deleted any allusion or suggestion of leafy branches” (p. 56). With this confusion, it’s hard to  know exactly what he is arguing. But then he adds another layer of argument by claiming:

The problem with Mark’s narrative is that there are no leafy branches in March (Nisan) during the time of Passover in Jerusalem because it is the wrong season. Therefore, either the narrative or the time sequence, the six days before the Passion and as a prelude to the Passover, is fallacious. (p. 56)

Now, would olive trees have leaves in March or April? Yes. On the Quora website is an article: “Do olive trees lose their leaves in winter?” Andy Lee, who studied Bacteriology & Cell Biology in college, commented: “Olive trees are evergreen trees and not deciduous. Olive trees lose some of their leaves in cycles throughout the year but never all at one time on purpose.” At Louisiana State University, extensive research has been done on olive trees. In a university article on the topic, it’s observed that:

They are considered evergreen tropical trees . . .

Olive trees are winter-hardy down to 10 to 15 degrees Fahrenheit . . .

Some of the characteristics that make this plant interesting for landscapes are its simple elliptic leaves that display a green-blue-silver color year-round.

So much for Alter’s attempted refutation of Mark’s account. He claimed, “there are no leafy branches in March (Nisan) during the time of Passover in Jerusalem.” This is untrue. Leafy branches of olive trees are present year-round. See a photograph of several olive trees on the Mount of Olives during snowfall, taken on 2 March 2012. One can see that they all still have their foliage.

So this fits the bill in every respect for a tree with 1) leafy branches, 2) with foliage in early spring (March or April), 3) in Jerusalem, and 4) even in the immediate vicinity of where Jesus entered Jerusalem and was hailed with “Hosanna!” Since (as Alter agrees) Mark didn’t specify which tree he was referring to, one can reasonably opine that it is the olive tree, since everything matches up perfectly. Nehemiah 8:15 is similar: “. . . “Go out to the hills and bring branches of olive, wild olive, myrtle, palm, and other leafy trees to make booths, . . .”

Alter cites Leviticus 23:39-40 as related to “the fall harvest festival of Succoth” (p. 56). Here is the second verse in RSV: “And you shall take on the first day the fruit of goodly trees, branches of palm trees, and boughs of leafy trees, and willows of the brook; . . .” He had noted that the word for “branches” in both KJV and RSV for Matthew 21:8 is klados (Strong’s word #2798).

The mustard tree is an “evergreen shrub” with green oval leaves. But the leaves of fig trees do fall in the winter.

Therefore, there is no insuperable problem of season and a complete lack of “leafy branches” in Jerusalem in the early spring. This is simply not an issue. Both Matthew and Mark (as we saw from the word study) could be referring to (much more likely) olive leaves, or also (in either case) possibly mustard leaves. Olive trees, however, were a lot more common in Israel (mentioned in the Hebrew Bible 46 times), whereas mustard trees receive zero mentions in the Hebrew Bible and only five references in the New Testament.

This leaves us with the consideration of the only mention of palm leaves connected with Palm Sunday:

John 12:13 So they took branches of palm trees and went out to meet him, crying, “Hosanna! Blessed is he who comes in the name of the Lord, even the King of Israel!”

Alter thinks this is a “controversy.” Why? He thinks the issue is “whether or not palm trees grew in Jerusalem and were readily available” (p. 57). Alter raises these issues but then helpfully resolves them himself. He cites a Bible scholar saying that palm trees and many other trees had disappeared from Jerusalem by Jesus’ time. But he cites another scholar saying that palm leaves could be obtained from the Jordan Valley. He cites a third scholar who points out that date palms are the plant or tree in question and that they require mean temperatures of 65 to flourish and become harmed if the temperature is below 20 Fahrenheit.

He then notes that date palms grew in Jericho, which is 3,280 feet lower in elevation than Jerusalem, and only 25 miles east. Jericho is called the “city of palms” in Deuteronomy 34:3 and 2 Chronicles 28:13. A thorough botanical description of the date palm states:

Depending on variety, age of a palm and environmental conditions, leaves of a date palm are 3 to 6 m long (4 m average) and have a normal life of 3 to 7 years. . . .

Unlike other fruit trees, dead or old leaves are not shed and do not drop on their own, but are removed under cultivation. An adult date palm has approximately 100 to 125 green leaves with an annual formation of 10 to 26 new leaves. The functional value of the leaf to the palm declines with age and no two leaves are the same age.

Date palms easily survive in Jericho all year-round, based on temperature data and averages. The mean minimum never dips below 43 degrees Fahrenheit in January or February or below 47 in December, while the mean maximum temperatures for those months are 53-58 degrees. The mean maximum is higher than 65 degrees for seven-and-a-half months of the year and is above 82 for three months. See a short video clip of date palms in Jericho, from March 2015.

In conclusion, none of the passages pose the slightest problem for the harmony of the Gospels. Mark and Matthew very likely refer to the leaves of olive trees, which could be obtained in Jerusalem, and the palm tree branches referred to in John 12:13 were easily obtainable at this time of year from date palms  in Jericho: just 25 miles away. The most likely scenario is that the crowds hailing Jesus had both olive leaves and palm tree “branches” or leaves. The texts do not contradict each other. Luke doesn’t mention the people having leaves, but so what? It’s not required that he do so. He doesn’t deny it.

Summary: Michael Alter asserted that during spring in Jerusalem, when Jesus entered the city on “Palm Sunday”, neither leafy branches (Mk, Mt) nor palm branches (Jn) were available. Wrong!

April 19, 2021
Resurrection Debate #3: Did Jesus Publicly Claim to Be the Messiah?
Next Post