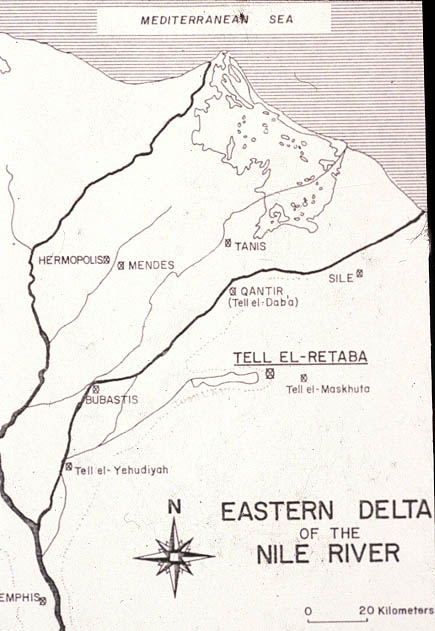 Exodus 1:11 (RSV) Therefore they set taskmasters over them to afflict them with heavy burdens; and they built for Pharaoh store-cities, Pithom and Ra-am’ses.

As I noted in my previous related paper, “City of the Exodus (Pi-Ramesses), Bible, & Archaeology” (6-28-21), the reign of Pharaoh Ramesses II  was 1279–1213 BC. Various historiographical, linguistic, and archaeological evidences indicate that Pi-Ramesses was built during his reign. Therefore, if the Bible is to be shown to be accurate with regard to Pithom, it would have to be dated to the same time period.

Wikipedia (“Pithom”) affirms the extra-biblical attestation for the city:

Thus, the first important thing to note is that the Bible is not the only source that mentioned Pithom. Our task is to see whether the time-frame of the Bible matches that of archaeology. The distance between Pi-Ramesses (Qantir) to Pithom (Tell el-Retaba) — the two biblical “store-cities” — is about 29 miles or 46.4 kilometers). They are both located in the eastern Nile Delta region.

Archaeological consensus appears to be that Tell el-Retaba is the site of ancient Pithom. Wikipedia elaborates:

Here was found a group of granite statues representing Ramesses II, two inscriptions naming Pr-Itm (Temple of Atum), storehouses and bricks made without straw. . . . The excavations carried on by Naville for the Egypt Exploration Fund uncovered a city wall, a ruined temple, and the remains of a series of brick buildings with very thick walls and consisting of rectangular chambers of various sizes, opening only at the top and without any entrances to one another.

Some scholars, such as Manfred Bietak and Kenneth Kitchen, have argued that this was the ancient Pithom.[10] This opinion goes back to the 19th century, when Alan Gardiner first identified Pithom with the site of Tell El Retaba, and this was later accepted by William F. Albright,[11] and Kenneth Kitchen.[12] . . .

The joint Polish-Slovak expedition has carried out a systematic research at Tell El Retaba since 2007.[14] . . .

More recent analyses have demonstrated that the designation for the temple of Atum, pr-itm, can be found in inscriptions at both sites—both at Tell El Retaba and at Tell El Maskhuta. This seems to demonstrate that the name ‘Pithom’ was used originally for the earlier site, Tell El Retaba, before it was abandoned. And when the newer city of Tel El Maskhuta was built, the same name was applied to it as well – as the temple of Atum was moved to El

Maskhuta. Thus, in effect, ‘Pithom’ was moved to a new location, which phenomenon is attested with some other cities as well, such as Migdol.[16]

Exodus 11:1 informs us that the Hebrew slaves “built” Pithom. This would be during the reign of Pharaoh Ramesses II  (1279–1213 BC). Does archaeology confirm this? The extensive Polish-Slovakian excavations were summarized in the article, “Preliminary Back-Analysis of the Height of Mud Brick Fortifications Based on Geoarchaeological Data at Tell el-Retaba Site in Egypt”, by Jerzy Trzciński et al, Studia Quaternaria, vol. 34, no. 2 (2017): 99–108. Here is what the researchers concluded, as to the date:

In the Second Intermediate Period (18th–16th century BC), the first settlers – the Hyksos from Syria-Palestine – appeared in the area. With the beginning of the New Kingdom (16th century BC), an Egyptian settlement was established on the site. In the 13th century BC, during the reign of Ramesses II, a fortress surrounded by “Wall 1” was established. During the reign of Ramesses III in the first half of the 12th century BC, a new, larger fortress was constructed and surrounded by a much more massive “Wall 2” and additionally, without clear reasons, the “Wall 3” with a migdol type massive protective gateway (Fig. 1, Table 1). (p. 99)

In other words, there was a “settlement” 500 years before this time, but apparently no large-scale structures, let alone a “fortress.” Thus, when the Bible says that the city was “built” it referred to the fortress walls and other large structures being built, or the city being significantly fortified. We might say, similarly, that “the modern city of San Francisco was built after the earthquake of 1906″: when in fact, the city was re-built then.

On the same page, the researchers noted that in the 14th century BC there was a “settlement hiatus for 100 years.” Then at the “beginning of 13th  century BC” (i.e., precisely the time of Pharaoh Ramesses II), there was “construction of fortress with ‘Wall 1’ (core and enlargement); several decades of fortress usage.”

As for the biblical reference to “store-cities” the researchers described various structures on the site that would be consistent with that notion:

. . . defence walls, housings, stables for animals, granaries, and burial chambers. Some of them originated as state investments, i.e. fortifications or barracks, and some as private enterprises, including small houses, extensions and small silos . . .  (p. 100)

All these miscellaneous constructions were made of sun-dried mud bricks, which is characteristic for the constructions of ancient Egypt. At that time, mud bricks were typically used as a construction material (Spencer, 1979; Kemp, 2000; Emery, 2011), whereas stone was used only for a construction of some temples and most important tombs (Arnold, 2001).

All structures in Tell el-Retaba were constructed of material commonly referred to as “mud brick”. (p. 100)

Defence walls were among the most massive constructions that were built of mud bricks in ancient Egypt. (p. 106)

So that obviously lines up with the biblical description. These mud brick walls were about six meters thick [19 feet, 8 inches], and the site included “granaries”: according to the Polish Centre of Mediterranean Archaeology. This was no small-scale building task.

Thus, we see that the Bible is dead-on accurate as to:

1) the specific time-frame of the city of Pithom,

4) its function as a store-city,

5) its being built (or technically, rebuilt / fortified) at the same time as Ram’eses, and

6) the aspect of straw being an important cohesive ingredient in the bricks [which I will address in my next paper].

Summary: The Bible (Exodus 1:11) mentions Pithom one time: as a “store-city” built of mud bricks (referred to six times in Exodus 5). Archaeology backs up the biblical claims in six major ways. 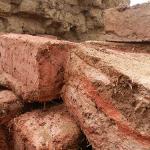