Moses and (Natural?) Water from a Rock 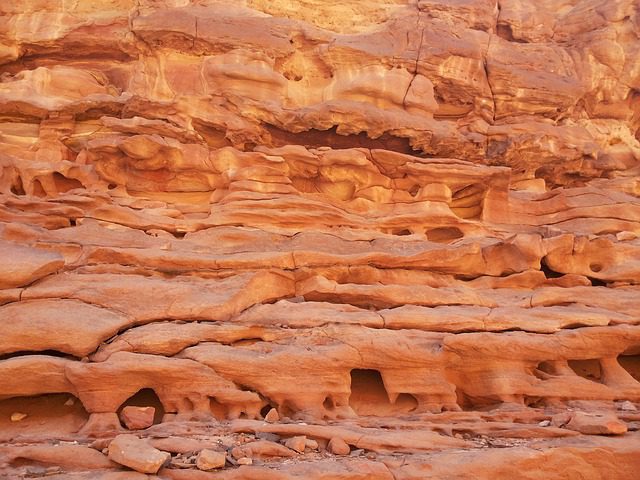 Exodus 17:6 (RSV) Behold, I will stand before you there on the rock at Horeb; and you shall strike the rock, and water shall come out of it, that the people may drink.” And Moses did so, in the sight of the elders of Israel.

Numbers 20:7-13 and the LORD said to Moses, [8] “Take the rod, and assemble the congregation, you and Aaron your brother, and tell the rock before their eyes to yield its water; so you shall bring water out of the rock for them; so you shall give drink to the congregation and their cattle.” [9] And Moses took the rod from before the LORD, as he commanded him. [10] And Moses and Aaron gathered the assembly together before the rock, and he said to them, “Hear now, you rebels; shall we bring forth water for you out of this rock?” [11] And Moses lifted up his hand and struck the rock with his rod twice; and water came forth abundantly, and the congregation drank, and their cattle. [12] And the LORD said to Moses and Aaron, “Because you did not believe in me, to sanctify me in the eyes of the people of Israel, therefore you shall not bring this assembly into the land which I have given them.” [13] These are the waters of Mer’ibah, . . .

Psalm 105:21 He opened the rock, and water gushed forth; it flowed through the desert like a river.

Psalm 114:8 who turns the rock into a pool of water, the flint into a spring of water.

Isaiah 48:21 They thirsted not when he led them through the deserts; he made water flow for them from the rock; he cleft the rock and the water gushed out.

Once again, in these articles where I suggest a natural explanation for an ostensible / assumed biblical miracle, I am not dogmatically claiming that no miracle occurred; rather, I contend that a natural explanation might explain what actually happened in some instances, and can be seen at the very least as a possibility (if the evidence is strong enough). I have no disbelief in miracles whatsoever (no vested interest in one explanation or another), and in fact, in my own family, four of us (myself, my wife, and two sons) have experienced miracles of healing. God can operate in whatever way He chooses: through miracles, natural events extraordinarily timed in His providence, or a combination of the two.

Colin Humphreys is the Goldsmiths’ Professor of Materials Science at Cambridge University and Professor of Experimental Physics at the Royal Institution in London. He has published over 500 papers on electron microscopy, semiconductors, metals and superconductors. He is also a past President of the Physics section of the British Association for the Advancement of Science. I cite material from his article, “Science and the Miracles of Exodus” (Europhysics News, May/June 2005):

For a rock to give out water it has to be able to store water, so it has to be porous. Do porous rocks exist? The answer is yes, and porous rocks like sandstone and limestone can absorb huge quantities of water from rain. In fact, when they are underground we use them as aquifers, natural reservoirs of water, and we sink wells and boreholes into them to extract the water.

If porous rocks, such as sandstone and limestone, are above ground, rainwater isn’t normally stored in them: it flows out through the pores. However, in a desert region, rocks weather in an unusual way because of sandstorms, which at high speed sweep sand and organic matter from decaying plants and animals on to the rocks. Over time, porous rocks in a desert can develop a hard impervious crust, rather like cement, due to this weathering. Modern Bedouin call this hard crust “desert varnish”, and it provides a smooth surface for their rock art. If the crust of a porous rock is broken by a sharp blow, water can indeed flow out, and this is an effect that is well known to geophysicists working in desert regions.

There is an interesting account of obtaining water from a rock in Yesterday and Today in Sinai written in 1936 by a former British governor of the Sinai Peninsula, Major Jarvis . He writes: “The striking of a rock by Moses and the gushing forth of water sounds like a veritable miracle, but the writer [Major Jarvis] has actually seen it happen. Some of the Sinai Camel Corps had halted in a wadi [a dried up river stream] and were digging in the loose gravel accumulated at one of the rocky sides to obtain water that was slowly trickling through the limestone rock. The men were working slowly and the Colour Sergeant said “Give it to me” and, seizing a shovel from one of the men, he began to dig with great vigour. One of his lusty blows hit the rock, when the polished hard face that forms on weathered limestone cracked and fell away, exposing the soft porous rock beneath, and out of the porous rock came a great gush of clear water. It is regrettable that the Sudanese Camel Corps hailed their Non-Commissioned Officer with shouts of “What ho, the prophet Moses!” . . .

We have seen that Moses obtaining water from a rock violates no physical laws. The biblical story fits what we know from science. So was the event a miracle?

So we know that sandstone and limestone are porous and can contain water. The Bible refers to “flint” in this regard twice (Dt 8:15; Ps 114:8). It could be that this was a reference to it being mixed with limestone, since this is often how it occurs in nature:

Flint is a sedimentary cryptocrystalline form of the mineral quartz, categorized as the variety of chert that occurs in chalk or marly limestone. . . .  It occurs chiefly as nodules and masses in sedimentary rocks, such as chalks and limestones. . . .

The “Ohio flint” is the official gemstone of Ohio state. It is formed from limey debris that was deposited at the bottom of inland Paleozoic seas hundreds of millions of years ago that hardened into limestone and later became infused with silica. (Wikipedia, “Flint”)

We know that sandstone and limestone are common in the Sinai Peninsula:

The Sinai Peninsula . . . has a triangular shape and is separated geographically from the Eastern Desert by the Gulf of Suez. Unconformable overlying the Precambrian basement is a section of Carboniferous through Eocene sedimentary rocks (shales, sandstones and limestones). Porous sandstone of Upper Jurassic to Lower Cretaceous age, ranging in thickness from 90 to 150 m, is widespread in the northern Gulf area. This sandstone, commonly referred to as the Nubian sandstone, has hydrologic aquifer properties and is overlain by a sequence of Upper Cretaceous through Upper Eocene limestones, dolostones, chalks and marls, which act as an aquiclude to the underlying Nubian sandstone. . . .

The Peninsula of Sinai may be divided into three geological districts, namely, the granitic and metamorphic, limestone, and sandstone rocks of which they are composed. Generally, Sinai reflects all geologic columns of Egypt. The northern part of Sinai mainly consists of sandstone plains and hills. . . .

The Nubian Sandstone of Lower Cretaceous represent the main water bearing unit in the region attaining a maximum thickness of about 500 m; at central Sinai it is made up of 70–130 m . . . (“Sinai Peninsula: An Overview of Geology and Thermal Groundwater Potentialities”: part of the book, Thermal and Mineral Waters [pp.25-38], March 2014, by Mohamed Ragaie El Tahlawi.)

Granite predominates in the southern Sinai Peninsula (where Mt. Sinai is located), but there is still water to be had (from rocks at that!). Arie S. Issar is Professor Emeritus in The Department of Environmental Hydrology & Microbiology at Ben-Gurion University of the Negev. He is the author of Water Shall Flow from the Rock: Hydrogeology and Climate in the Lands of the Bible(Springer: 1990). From a description of this book:

Many times when the author saw the Bedouins of southern Sinai excavate their wells in the crystalline rocks, from which this part of the peninsula is built, the story of Moses striking the rock to get water came to mind. The reader will, indeed, find in this book the description for a rather simple method by which to strike the rock to get water in the wilderness of Sinai. Yet this method was not invented by the author nor by any other modem hydrogeologist, but was a method that the author learned from the Bedouins living in the crystalline mountains of southern Sinai. These Bedouins, belonging to the tribe of the Gebelia (the “mountain people”), live around the monastery of Santa Katerina . . . They know how to discern places where veins of calcite filled the fractures of the granites; such places are a sign of an extinct spring. They also know how to distinguish an acid hard granite rock, and hard porphyry dike from a soft diabase dike. The latter indicated the location at which they should dig for water into the subsurface. In Chapter 9, the reader will find a detailed description of how they used this knowledge to extract water from the rock.

Summary: Famously, Moses was able to draw water from a rock in the biblical accounts of the wanderings of the Israelites in the Sinai Peninsula. This is quite possibly scientifically explainable. 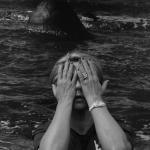 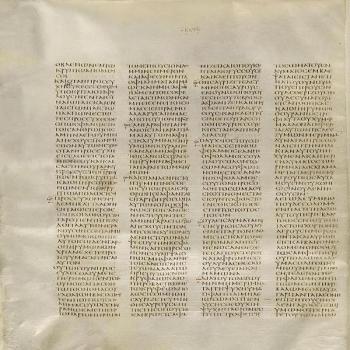