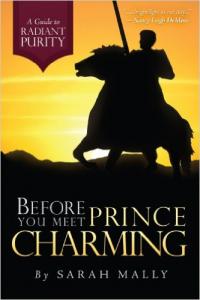 All quotes from Sarah Mally’s ‘Before You Meet Prince Charming’ will be in blue italicized text.

The first portion of the allegory from the chapter on how dreams have to die revolved around the Princess meeting and talking with Sir Valiant for a few minutes.  This meeting got her emotions all stirred up since she’s got a crush on Sir Valiant.

Since Sir Valiant doesn’t return to see her again, the Princess’ excitement about being on the verge of having a relationship fades.  She does some light-weight work for others – the list includes being hospitable to dignitaries, standing in for her father at functions, sewing for the poor and playing with orphans – then indulges in her favorite past-time: moping and wringing her hands about her future.

One day when she’s especially down she goes for a walk.  Her mother follows her and they have a conversation.

“Hearing soft footsteps, she turned around and saw her mother walking behind her. The princess waited but said nothing, telling herself that she was determined not to start crying.

Her mother seem to already know how she was feeling, as mothers usually do, and gently asked if everything was alright.

The princess was silent for a few moments then began to speak slowly. “Years ago I decided that I had a purpose in life much bigger than marriage and that I would gladly stay single if my Heavenly Father asked this of me. Time after time, I have prayed for His will to be done and purposed to be content. And just when I had thought I had finally understood contentment, just when I thought I had finally learned how to patiently wait, Sir Valiant came to visit, and… and… made everything harder. I don’t understand why I can’t learn to trust and I’m so easily distracted. And why- ” she concluded with a sigh, ” why does this have to be so difficult?”

“Struggles are a necessary part of life,” her mother said. “They strengthen us and prepare us for the new trials that lie ahead. When one struggle is overcome, another is often around the next bend.”

“I suppose. But Mother, I feel like I’m failing in each struggle, not overcoming them.”

“Thou art growing. Thou art learning. These are the very things the struggle is designed to accomplish in thy life. Do not forget, dear daughter, that except a corn of wheat fall into the ground and die, it abideth alone: but if it die, it bringeth forth much fruit. ” “(pg. 169)

“Bear fruit –that is exactly what I want to do,” the princess said quietly, as if deep in thought.

“Then your dream must die. ”

“But my dream is a good dream, not a bad dream. It is the dream that God has given me. It is nothing wicked I desire, but only what is natural, wholesome, and beautiful. Why must it die? ”

Her mother stepped off the path, knelt down, picked up an acorn, and explained, “Observe this acorn, perfectly designed for what it is intended to do – die. The acorn does not know why; the acorn does not understand what is ahead, but only if it is buried in the cold and dark earth –forgotten and alone –does it fulfill its purpose and become what it is created to be. Would the acorn ever have imagined that it would become the beautiful oak tree you see before you? Not in its wildest dreams. When you admire the oak tree, do you mourn the loss of the acorn? Of course not. By losing its life, the acorn becomes something so much greater, so much more beautiful, so much more valuable. The death is forgotten. The fruit is remembered. Nevertheless, death was required.” (pgs. 169-170)

That’s the end of the allegory.  Literally.  The Queen’s kneeling under an oak tree and the Princess never responds to her.

The exhort-and-advise section trots out some memorable (read: odd) anecdotes to support the “Let Your Dreams Die” theme.  The net outcome, however, becomes “If you let your dreams die, they come true!” which doesn’t quite fit…..ah, well.

August 9, 2017 Quoting Quiverfull: Doctors and Nurses Want Death Not Healing
Recent Comments
14 Comments | Leave a Comment
Browse Our Archives
get the latest from
Nonreligious
Sign up for our newsletter
POPULAR AT PATHEOS Nonreligious
1